Read the inspiring story of the encounter of Breaking Borders and Comuna 13 leaders. Learn what happens when like-minded people exchange thoughts about their powerful projects.

In Barrio Egipto drug traffic, gang violence, and a lack of opportunities determined the lives of locals. Without much choice and in a serious struggle to survive, many have fallen into violence, have lost their liberty in prison, lost their beloved ones or even lost their own lives in the battle that raged in the neighborhood. Fast forward a few years and people here are striving to bring change to their district and create a better future. And all of this began with one decision.

When Jaime Roncancio got out of jail after 5 years, a part of his family had died in the conflict, others were in prison and the rest on the best way to get there. He knew he had to change something. From two fellow inmates, he had heard about Comuna 13 in Medellín. He was told that the locals use their difficult past and turn it to something positive by supporting culture and art and sharing it with visitors. This was the beginning of the Breaking Borders project.

Only two years have passed from Jaime’s initial idea to the fascinating tours they give today. In comparison, the project leaders in Comuna 13 have already won a lot of experience. This difference was the base for the idea to send the leaders of Breaking Borders to Medellín to have a look at Comuna 13 and its development and get inspiration for their own neighborhood.

Many motivated supporters and one crowdfunding campaign later, Jaime and three other Breaking Borders members found themselves at the airport ready to leave Bogotá for the first time in their life. Soon it became clear that next to the main idea of the meet-up, this trip would have many other positive effects. Just the fact of getting on a plane got the whole team really excited. Sometimes it’s the little things that create the biggest smiles. 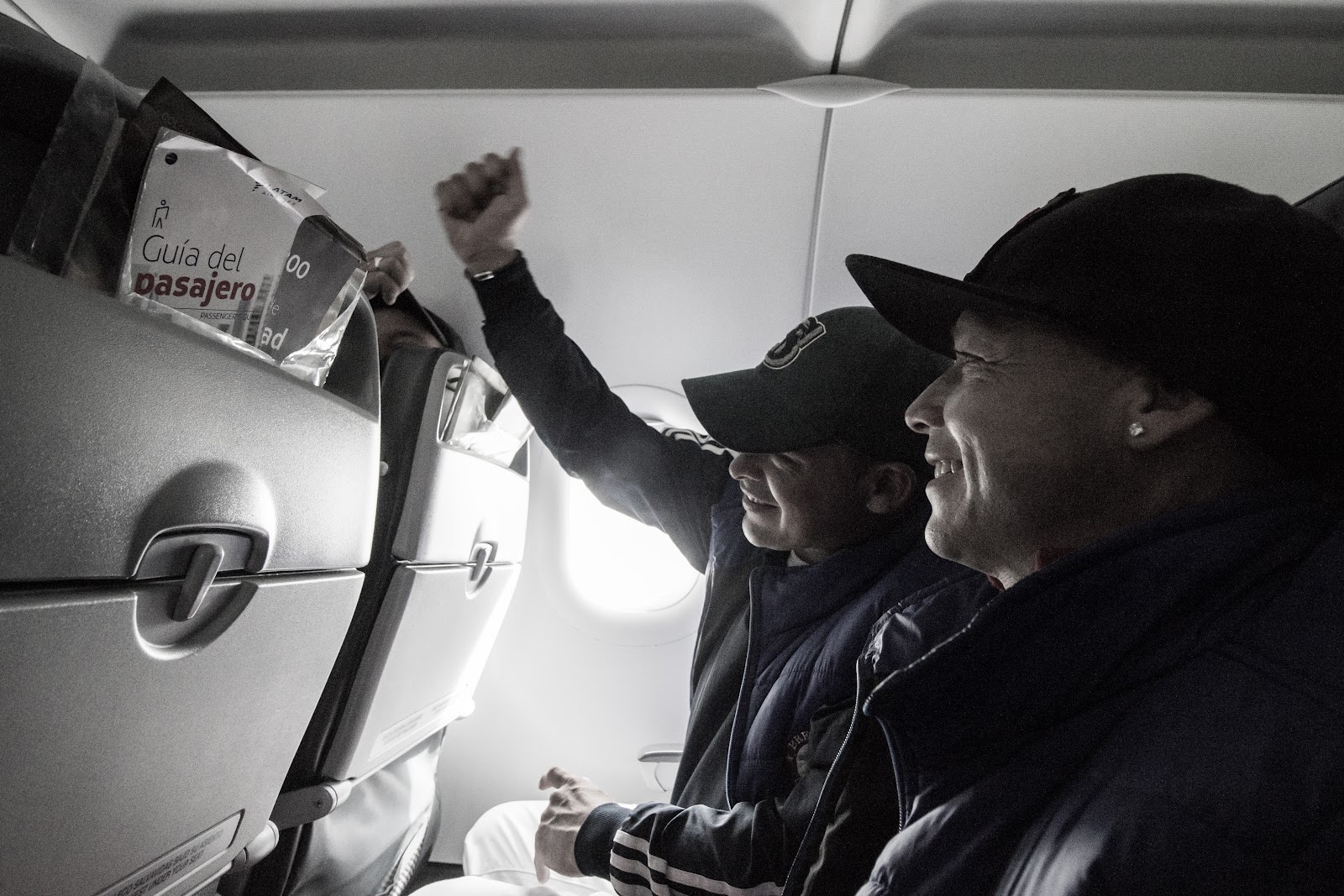 Breaking Borders team on the flight to Medellín

The first day in Medellín was reserved for a sightseeing tour through the city. While for most of us that means visiting famous places and monuments, for someone who leaves their hometown for the first time literally everything is a sight. From noticing the easy transport systems in Medellín and how well-organized the city is to stopping at the local tea shops, admiring the variety of herbs that they offer. The day exploring the city was a chance for the guys to let their curiosity run wild and get valuable impressions of life outside Bogotá. 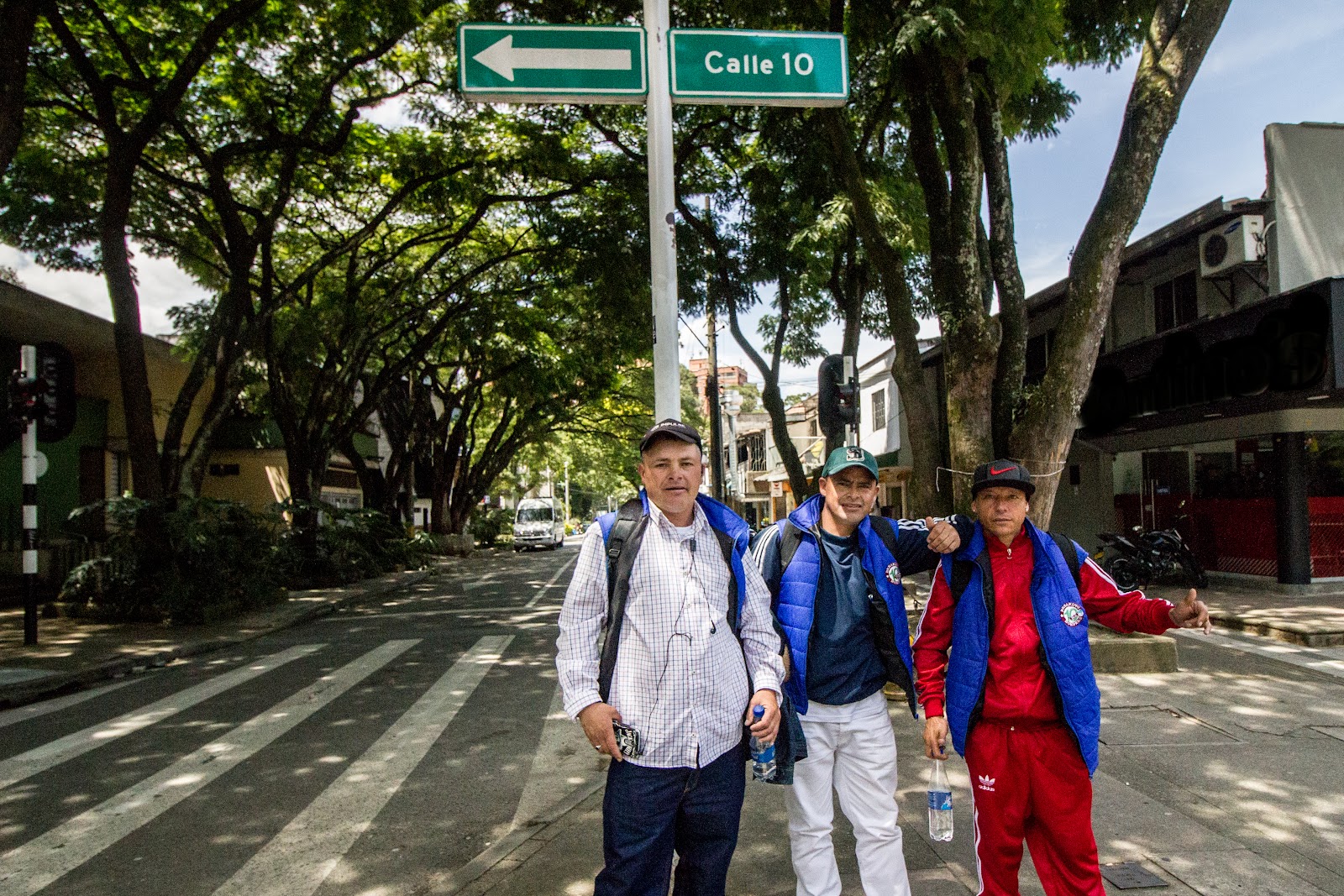 The next day was spent getting to know Comuna 13. Their guides for the day were Kbalahh and Chota, two community leaders of the neighborhood. After a warm welcome at the metro station in San Javier, they first took the Breaking Borders team to see Comuna 13 from a special perspective – from above. The ride on the cable car was surely an unforgettable experience, not only because it included overcoming the fear of heights for some. 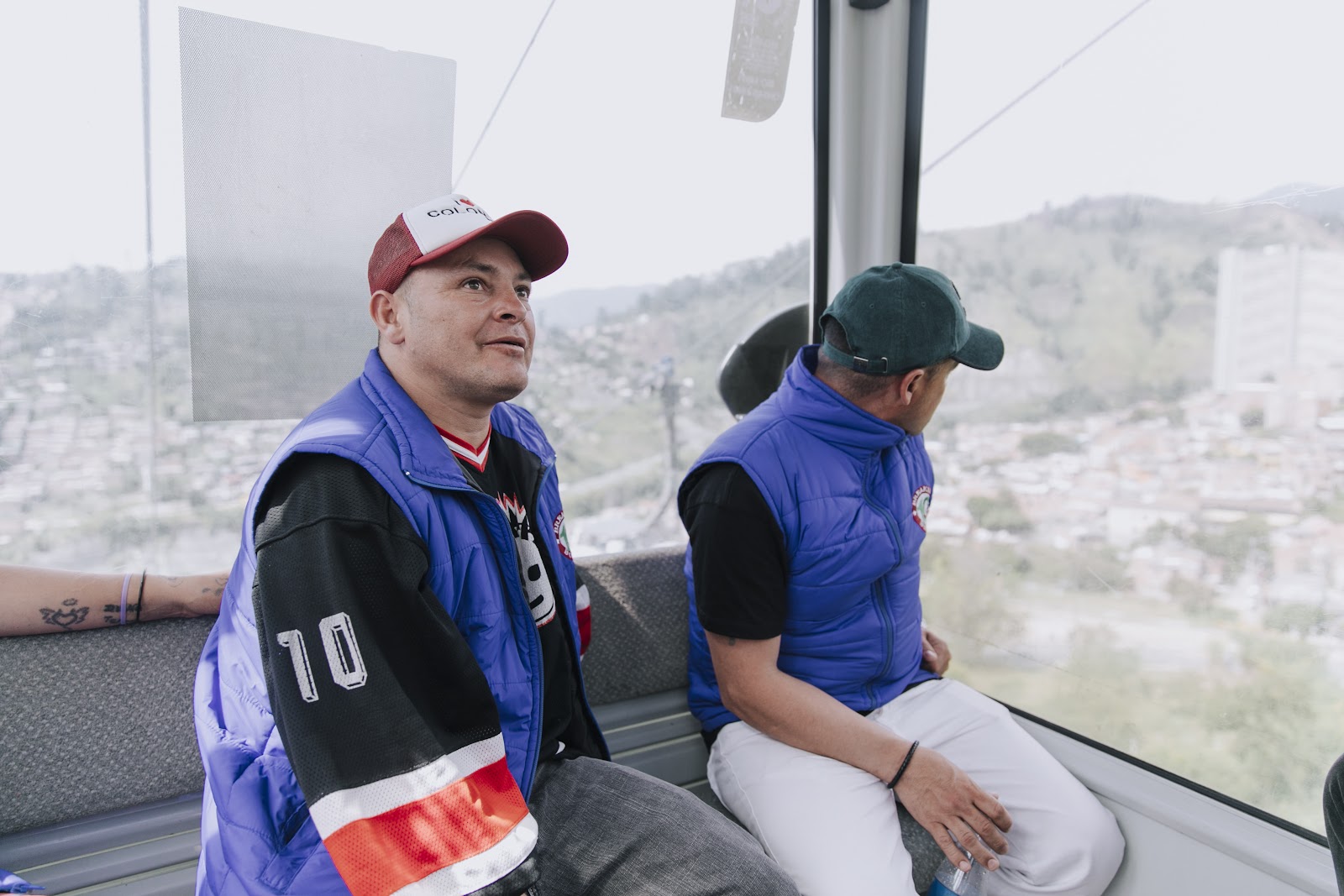 Riding the cable car in Comuna 13

The following tour included visiting some of the most impressive paintings while learning about the history behind them. This was a great opportunity for Jaime and his friends to compare the history, culture, and art of the neighborhood with their own in Barrio Egipto. They also had a lot of chances to chat with the Comuna 13 guides about their projects and learn some interesting tips that they have picked up over the years. It was great to see how the members of Comuna 13 were eager to share their knowledge and learnings with their guests.

Just as Jaime welcomes tourists to his home, he and the others were welcomed to Comuna 13. There were a lot of opportunities to connect and get to know each other over the delicious and typical lunch cooked by Chota’s mother at their house. The Breaking Borders guys were also hosted by some of the local families during their stay – something else Comuna 13 and Barrio Egipto have in common: They write hospitality in capital letters. 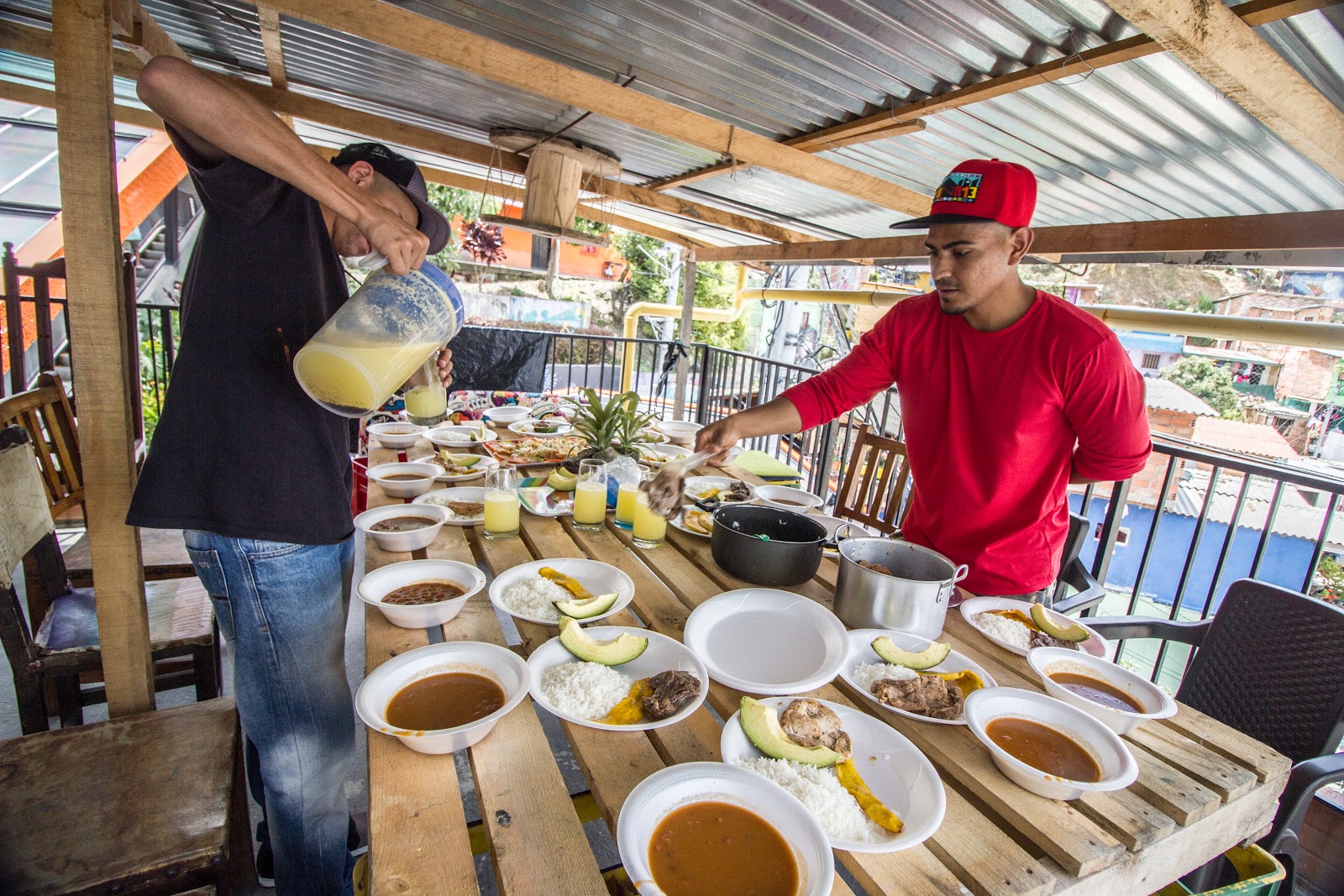 Preparing lunch for everyone at Chota’s house

On the last day in Medellín, everyone had the chance to exchange thoughts about their experience and ideas for their neighborhoods. In the library of San Javier, also known as the gate to Comuna 13, the members of both projects, the organizing companies, and local tourism representatives met up for a day of reflection and discussion. Interestingly, some of the locals from another Medellín district called Moravia were among the participants as they are starting an initiative similar to Breaking Borders and the Comuna 13 tours.

The main topic of the day was the different projects, what they have in common and what makes everyone so passionate about improving their homes. For the Breaking Borders project, the main focus is the future of the children living in the neighborhood. As the leaders of the project had to spend their youth in a violent environment, they want their children to grow up in peace. 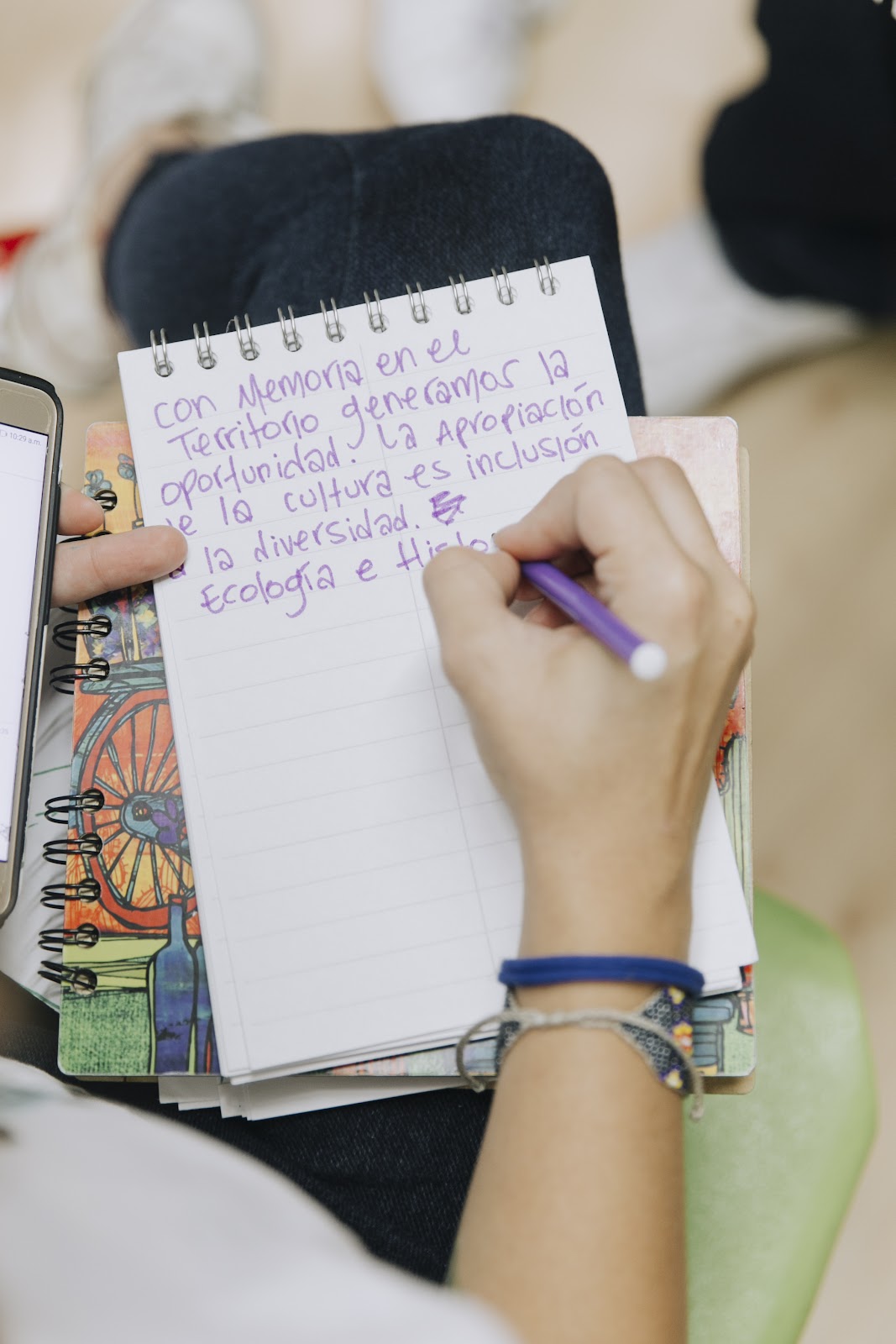 Exchanging thoughts about the projects

Another important idea that was discussed in the group was responsible tourism. While tourism brings a lot of positive economic changes to the neighborhoods, the main idea behind the initiatives has to remain connecting the visitors with the local cultures. In the end, one of the most positive changes that the projects can bring is the change of the image of these neighborhoods which can be achieved through authentic tours.

The discussion was a chance for everyone to reflect on the development, their goals, and their dreams. It was a very emotional and fitting end to a trip that has brought valuable experiences to everyone involved.

Asking the Breaking Borders guys about their time in Medellín, they would surely tell you about the many new ideas they have collected for their project and all the motivation they have, to keep bringing their project forward. To quote Jaime’s signature rap (that you will surely hear when you get a chance to visit him in Barrio Egipto): “We are going to fight for a new generation and for Breaking Borders the sky’s the limit”.


Watch more videos about the meet-up:

Check out our tours in Barrio Egipto and Comuna 13: