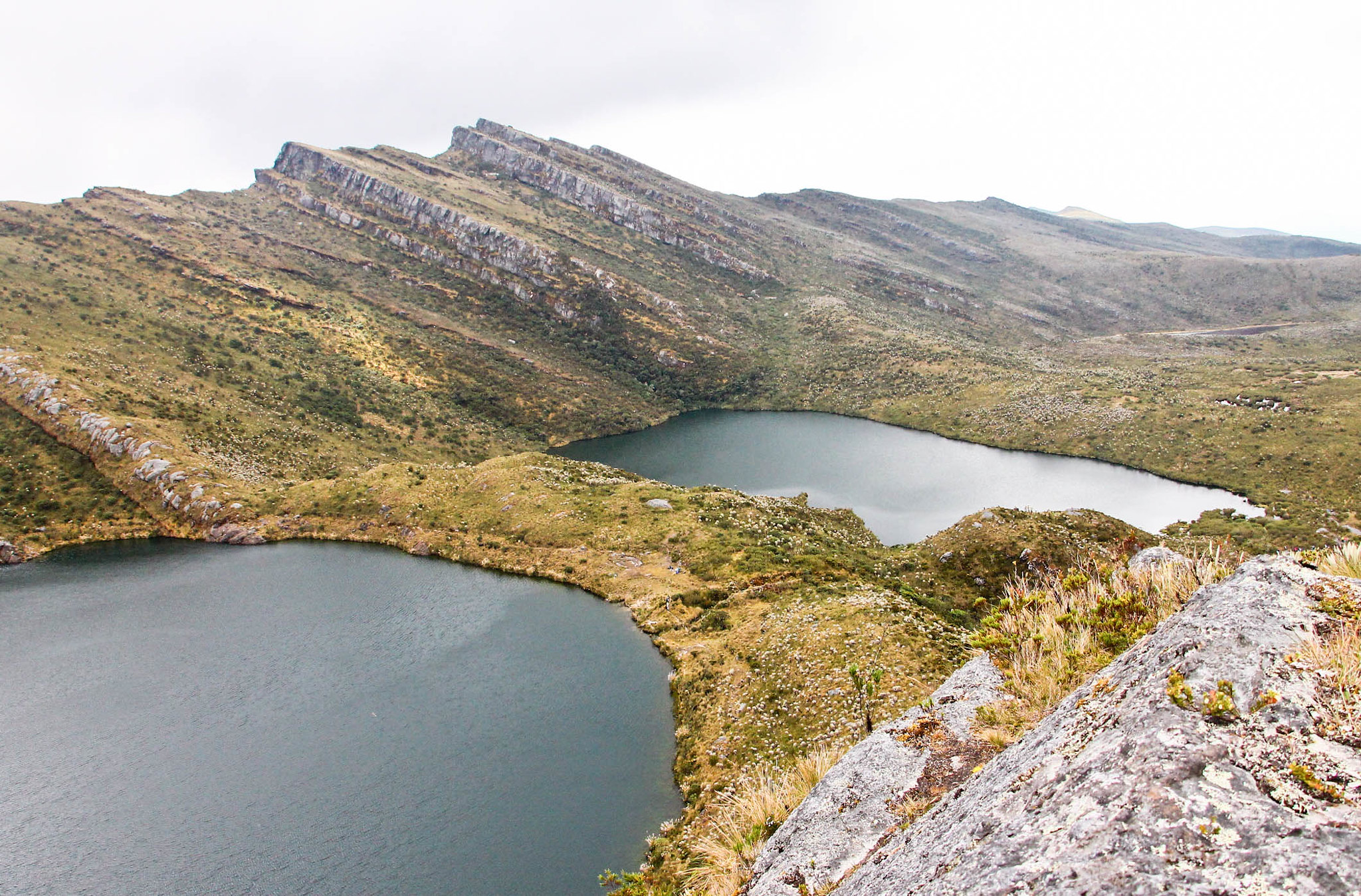 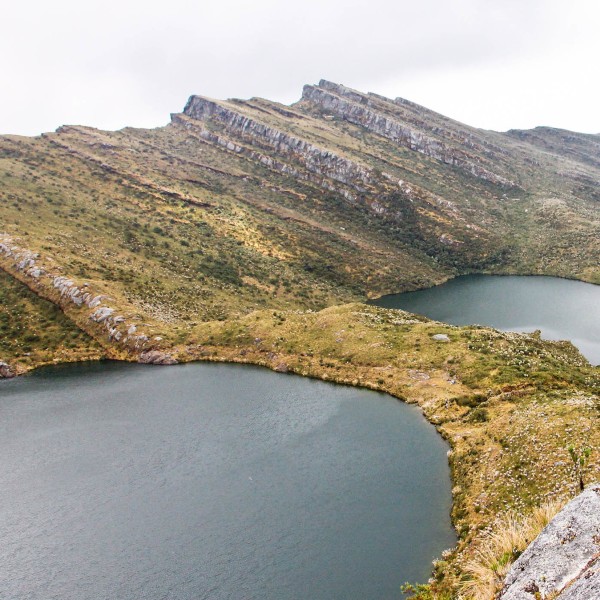 Páramos - Water Factories of the Andes

Paramo ecosystem is one of Colombia's most important freshwater sources and home to unique flora and fauna species. Read more about this natural wonder here.

The importance of the páramos for the mankind is undisputed, shown in impressive numbers: they take responsibility for 70% of Colombia’s fresh water.
This vegetation form is a unique ecosystem on our planet, habitat of endemic species, natural water source and located in the tropical-equatorial highland steppes, typical for the northern Andes of South America. It occurs above the forest line between approximative 3500 and 4800 m altitude above the sea level in a humid climate. The páramo is the ecosystem of the regions between the timberline and the zone of permanent snow. 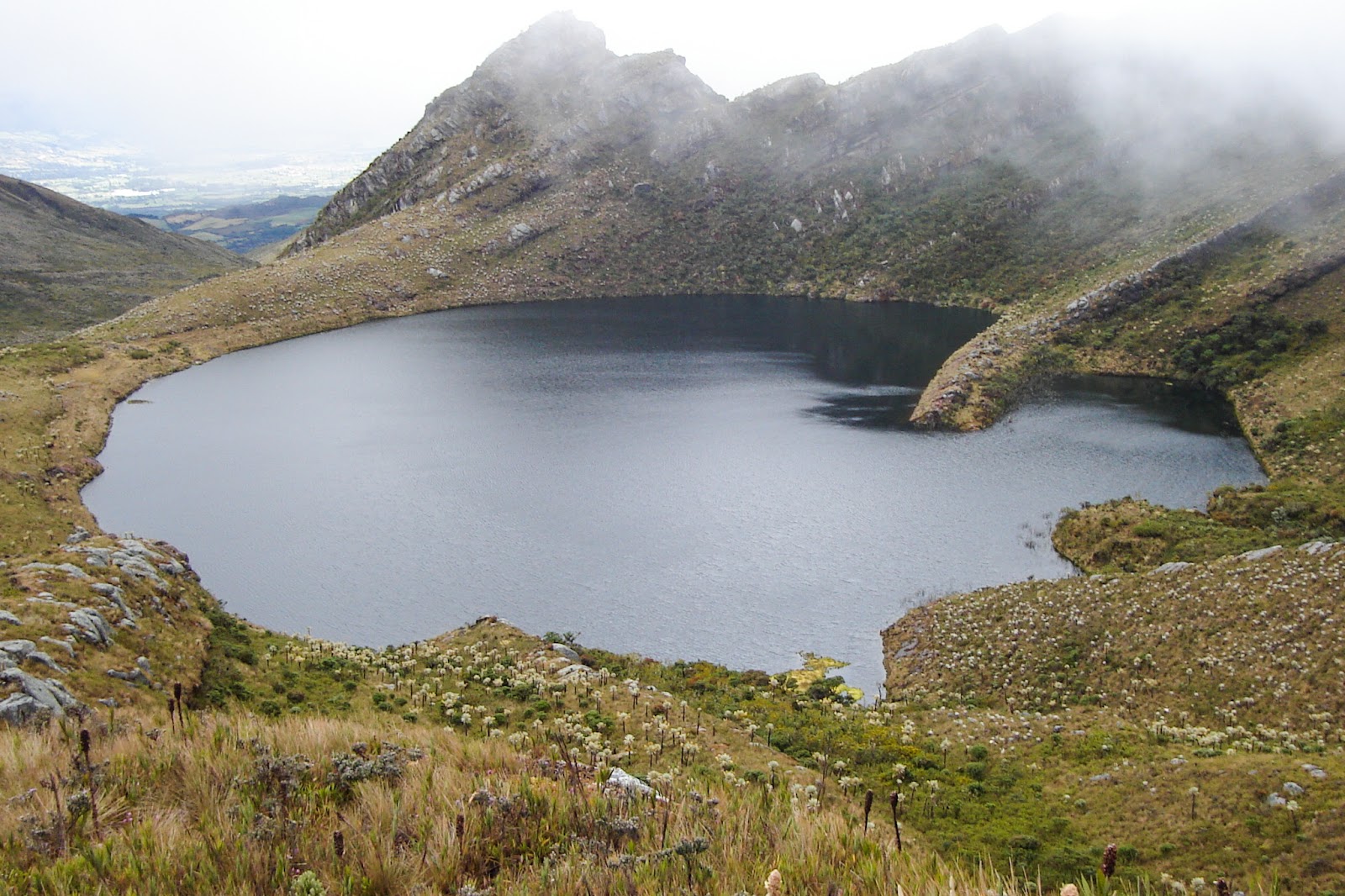 In contrast to the puna mountain steppe, a similar ecosystem at the same altitude further south, the páramo is not influenced by seasonal climate fluctuations, but by daily turnovers: Temperatures vary from around 8 °C during the day to -3 °C at night throughout the year and are accompanied by rapid weather changes. The average annual precipitation lies between 1000 to 2000 mm with a relative humidity of around 75%.
The páramo areas range from Colombia to Ecuador and northern Peru, wherein the Sumapaz Páramo in the Colombian Andes is the largest in the world. However, Ethiopia and New Guinea also have kind of related vegetations at similar latitudes and altitudes.
Due to its unconventional characteristics of environment, agriculture is only possible in the form of pasture farming with llamas and alpacas in South America and respectively sheep and goats in Africa.

The treeless vegetation is shaped by a unique mixture of shrubs and mosses. Characteristic elements are high eyrie grasses and giant rosette plants with an enormous number of leaves on a thick, black humus. Plant growth takes place slowly but steadily and leads to a high age of the páramo plants.
Probably the most striking crops in the páramo are the family of  Espeletia with one of its most famous members: the Frailejones. 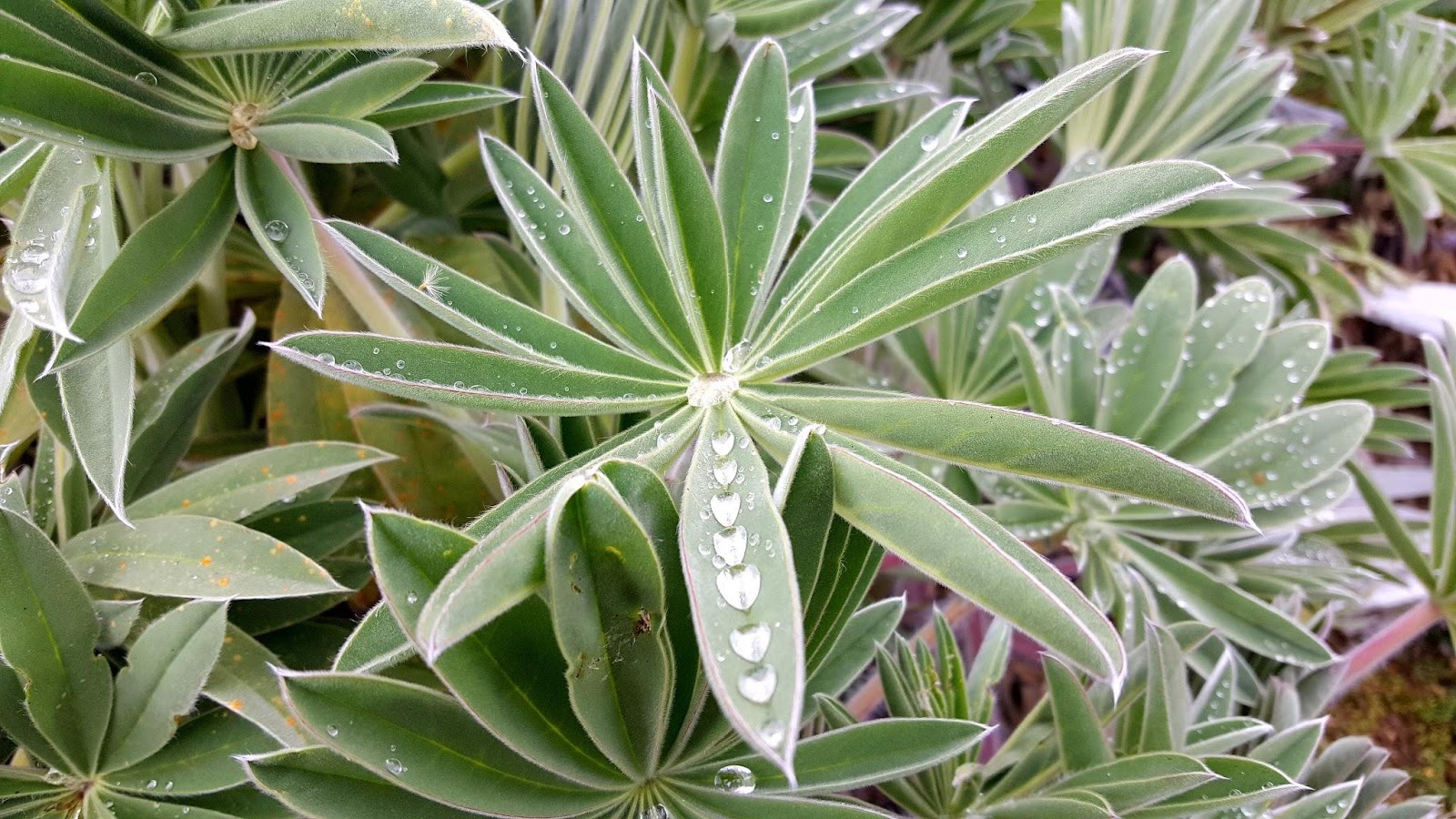 Frailejones and others are very important for the ecosystem because they regulate the water cycle (they store water from the clouds/fog and slowly release it into the environment), produce most of the biomass in the Páramo, counteract soil erosion and are essential for the survival of several species.
The vegetation extends over several hundreds of metres and changes with increasing altitude respectively adapts to the natural conditions.


Elevation Levels
The subpáramo forms the transition between montane forests and the páramo and combines both of its aspects: the grass from the zone above and the forest from below. In the subpáramo bushes still thrive up to 3 m high. The strong degree of disruption also make this zone particularly difficult to define, as humans typically extend and expand the area for their own purposes.


Bushes step back, ferns and perennial herbs come to the fore, large areas of mountain ranges are covered with different types of grass. Also noticeable are overman-high plants from various families such as the composite flowers, the bellflower plants and the bromeliads. The dominant life forms are rosette plants (e.g. Espeletia, "frailejones"). 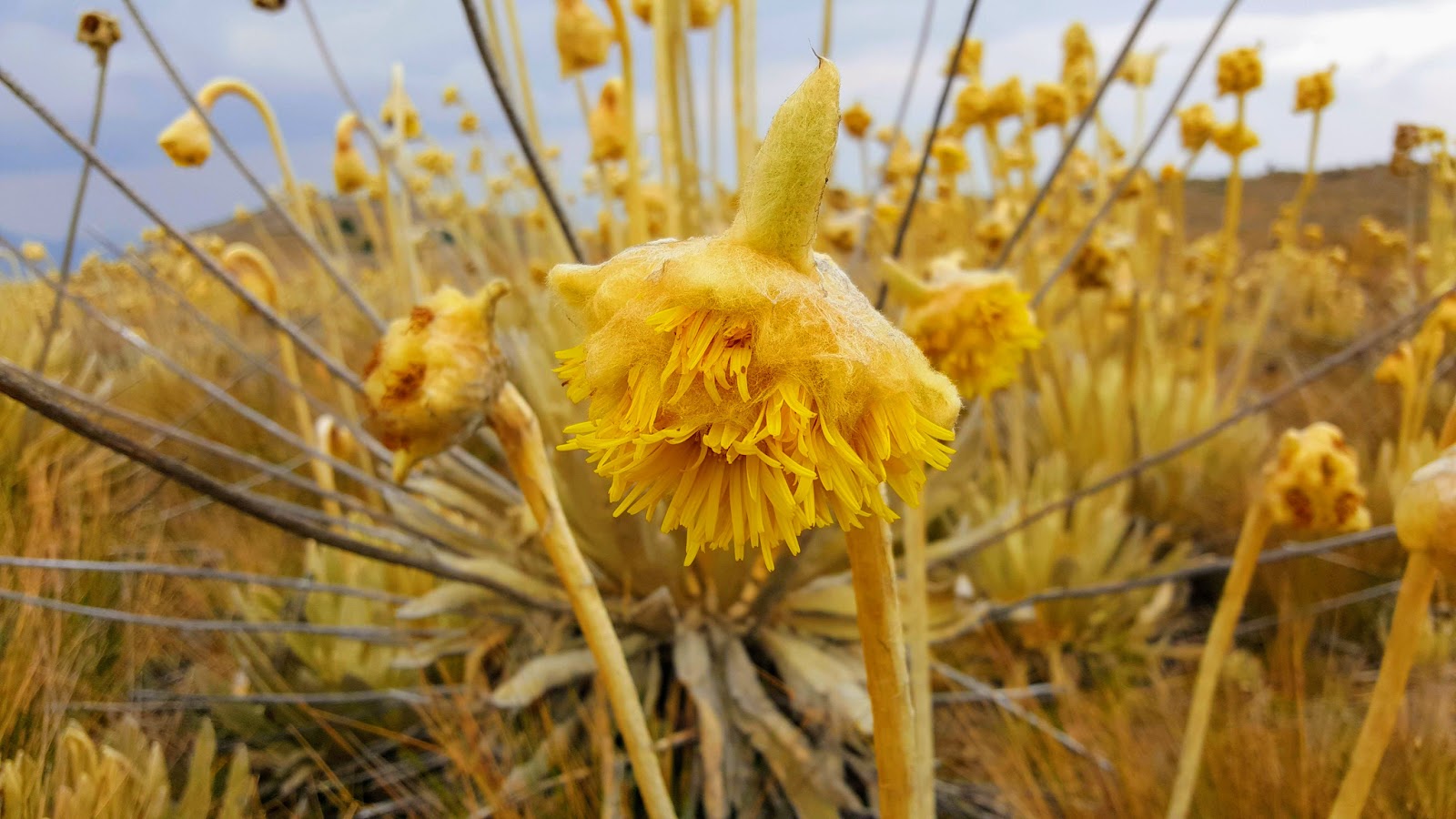 The yellow felted blossoms of the frailejones

Other common vegetation forms are including large and small shrubs, stunted trees, cushion plants and, like mentioned before, herbs.
Due to its easier access and high levels of grass, this zone is more impacted by humans and suffers from both, burning and grazing activities.
The transition from the páramo to the permanent snow region is characterised by almost exclusive vegetation: ground coverers of various systematic affiliations, especially lichens and mosses. These soil-covering plants have the ability to store large amounts of water.
This area has the lowest air temperature, precipitation level, soil water-holding capacity, and nutrient content of all the zones. The highest in altitude has the highest levels of solar radiation and night frost, so this vegetation must be highly resistant to such difficult weather conditions.
Due to its high localization, this area consists the least grade of disturbance by humans.

Moss helps saving water like a sponge. Because páramos are high up and so humid, they become appropriate places for water springs, which as they descend and roll down mountains and rocks, begin to form streams and freshwater rivers. 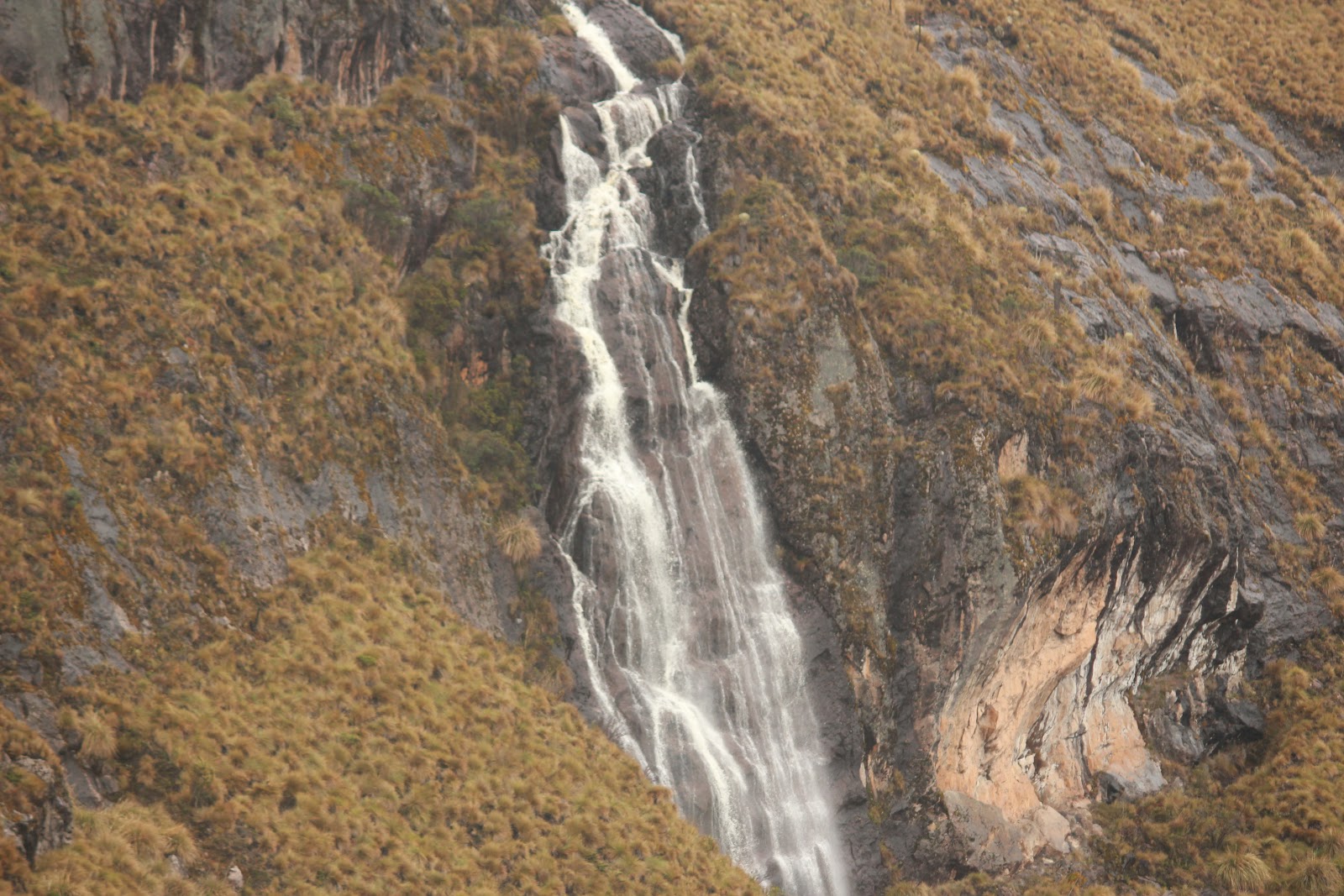 Collected water formed to a waterfall in the Los Nevados Nationalpark

Due to their cold climate and organic soil, they are ideal for collecting, filtering and regulating the water that comes from rain, fog and thawing. The páramo then constantly releases clean, pure water, a reason why they are considered as water factories, an important natural water reservoir even in long dry seasons. Therefore these are protected parts of nature in many areas.
Thus, the advance of agriculture, animal husbandry and the exploitation of raw materials threaten the drinking water supply of nearby towns and cities, a situation that has recently led to more and more conflicts.
The flora of páramos is adapted to its specific conditions and is vulnerable to even small climatic change. Climate change in the Andes is causing the disappear of glaciers and a drop in rainfall, virtually drying it out. It follows the desiccation of the water supply for cities such as Bogotá (the páramo in the Chingaza National Park supplies 80% of its total water consumption).
BOOK NOW