Colombia's Peace Leaders - Meet the People who Make a Change

Despite Colombia's difficult past, there are still visionary leaders aiming for a peaceful future for the generations to come. Read their moving stories in this post.

Colombia has a difficult history, but since the peace treaty of 2016, things have calmed down a lot. Many Colombians decided to make a difference and started their own projects to support and preserve peace in their homeland.

We want to introduce several people and communities who made the effort to start and support projects for a safer and more prosperous future for the generations to come. These people grew up in different parts of the country and have witnessed distinct challenges throughout their lives, but what they have in common is the drive to be change agents. See how even small projects have a huge impact on the communities and the peace development within Colombia.

Bogotá’s Egipto neighborhood has been known as one of the most dangerous places in the country. However, a few years ago, things started to change. Ex-gang members now organize tours through the neighborhood and the foundation Buena Semilla began to organize events for the community's kids.


About a year and a half ago, they also started a project for the women, the moms, the sisters, the wives, who often had no one with whom they could discuss the issues in their lives. Tejiendo Corazones is a project where these women come together to weave or sew support each other. This project also gives women the opportunity to be more independent, gain knowledge about these handicrafts and make their own living. 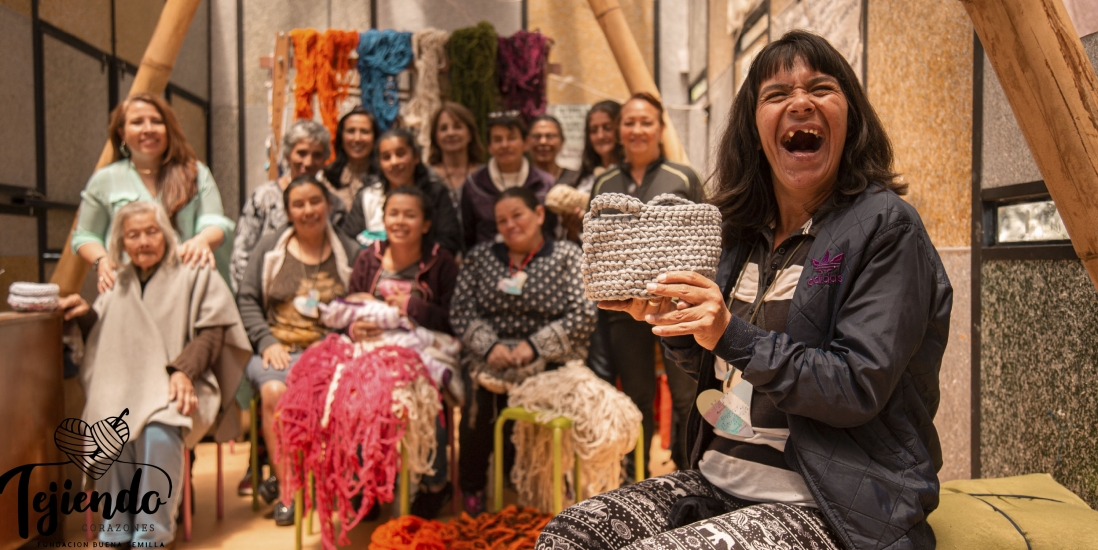 The women of Egipto at the weaving workshop, https://fundacionbuenasemilla.org/tallertelares/

Carolina, the project’s founder, told us “Today the women feel empowered to push their families forward, to heal their hearts and to weave new lives for themselves and their families. They learn to solve problems with their neighbors in a peaceful way, to support each other, to overcome adversities, that everyone has to face within their lives.” For Carolina, the most beautiful part of the project is “to see the transformation of the women’s hearts. Before they reflected hopelessness, anger, pain, but today we see a new spark in their eyes with dreams, illusions, and aiming for their goals that in the past seemed to be unreachable, but today may become reality.”

Similar to Bogotá’s neighborhood Egipto, the Comuna 13, has been a violent place in the past. In the 90s and 2000s, armed conflicts between the government and the guerilla were common here. In those times, everyone living in this part of the city was seen to be a criminal, a drug dealer, involved in illegal actions. However, that’s not how it really was, nor how it is today. The times have changed, and the colors and the sounds of the community are a lot more friendly nowadays. 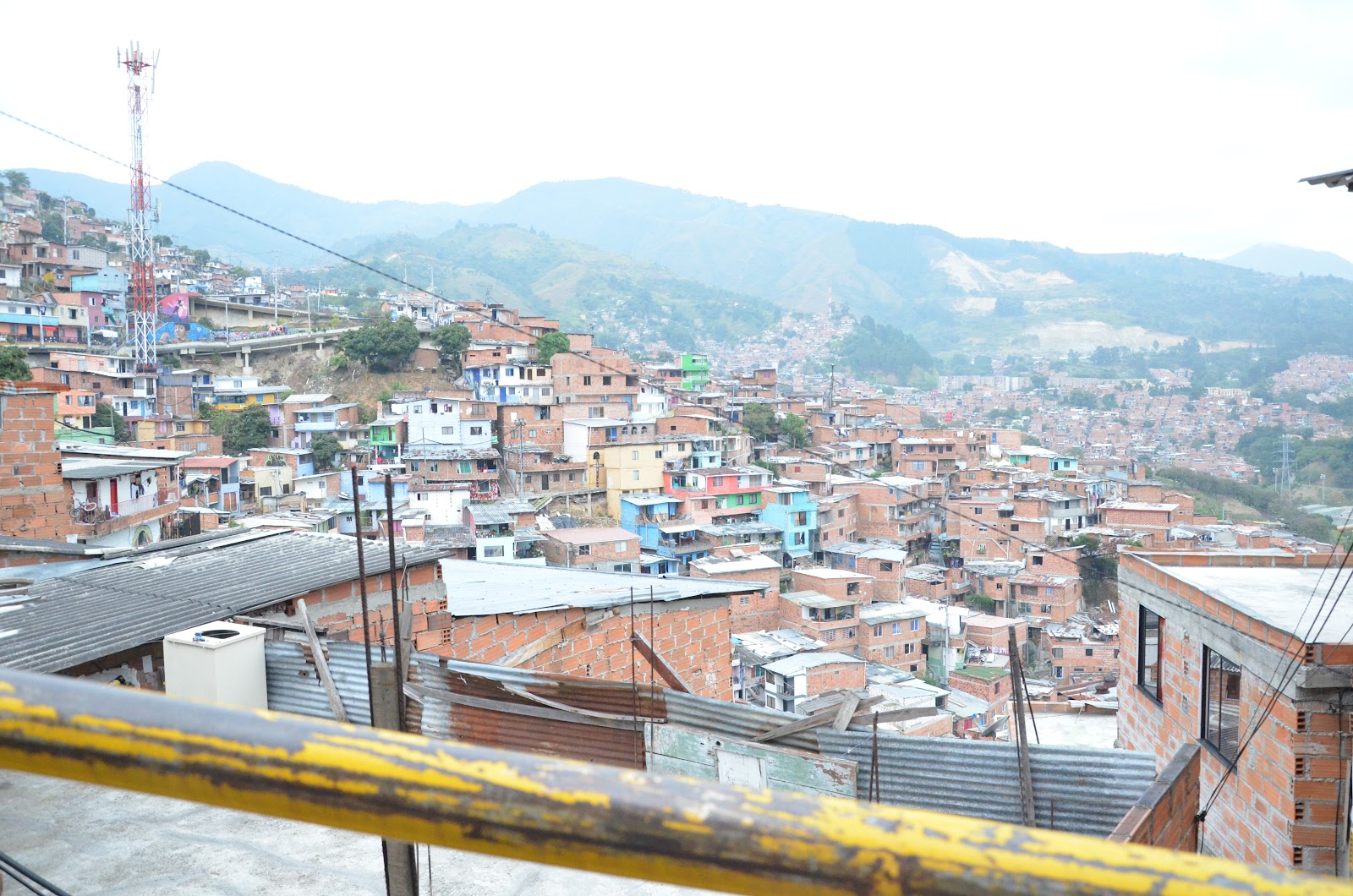 Part of this change is the project Son Batá, which gets children in touch with music, helping them to believe in their dreams and holding them away from criminality. Fredy, one of the project leaders, remembers the beginning of Son Batá, when the music came to the community “The HipHop and Rap returned our courage to face life, our aim to get to know the world, but more than anything it gave us the opportunity to dream, and starting again to dream about becoming a musician”

For Fredy “not only white means peace. We don’t want peace to have any etiquette, we don’t want it to have a color, neither an age, or a nationality. It’s a construct that is built within the inner, with myself, and from there I take the step to bring inner peace to other people. So they can reflect and multiply it.”

Algeciras has been another feared place in the past. Known to be a “red zone”, a spot of the guerrillas, and being envenomed by mines. Today, the Campaña Colombiana Contra Minas is working hard to clear the area.

Nowadays, living in Algeciras is a lot more tranquil than it was before, the people can go to other places without restrictions. In the past, there have been limitations of hours and places where they could go to. Taking away these boundaries doesn’t only improve the quality of life the people experience, but it also helped Algeciras to grow economically. Demining the area provides employment and the beautiful landscapes of the region attract ecotourism, which again generates income for the locals. 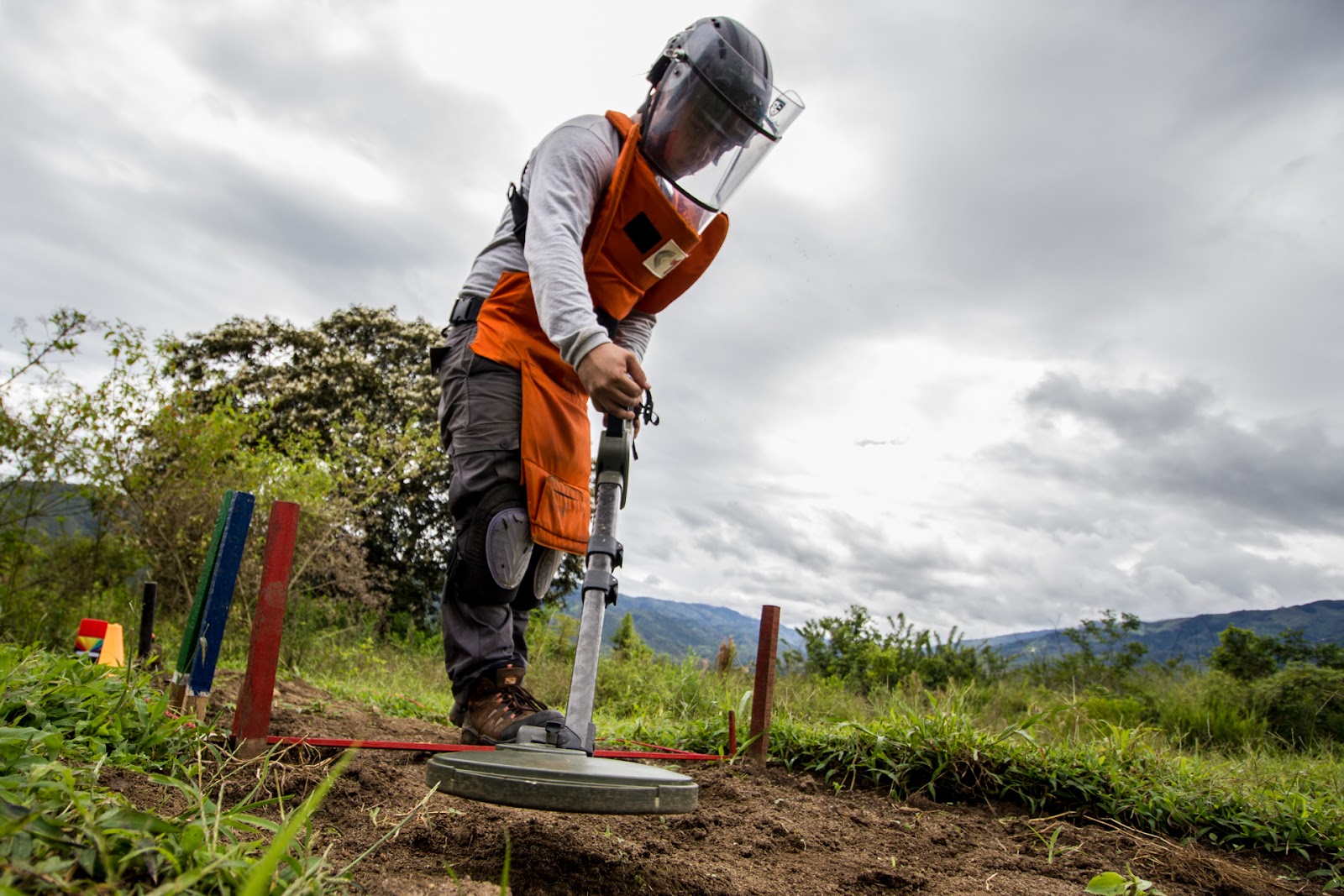 Gerardo tells us that peace for him is “Opportunities. Opportunities for the people of the village. Making that we dream not only as an individual but also as a collective. Building a Colombian dream, our dream, that brings prosperity to our country.”

Another problem, that Colombia has faced in the past and that contributed to the violence in the country was the drug production. Many farmers were forced into growing coca or poppy seeds, to make a living. Today, a lot of the former coca farms are replaced by cocoa plantations and coffee fields. 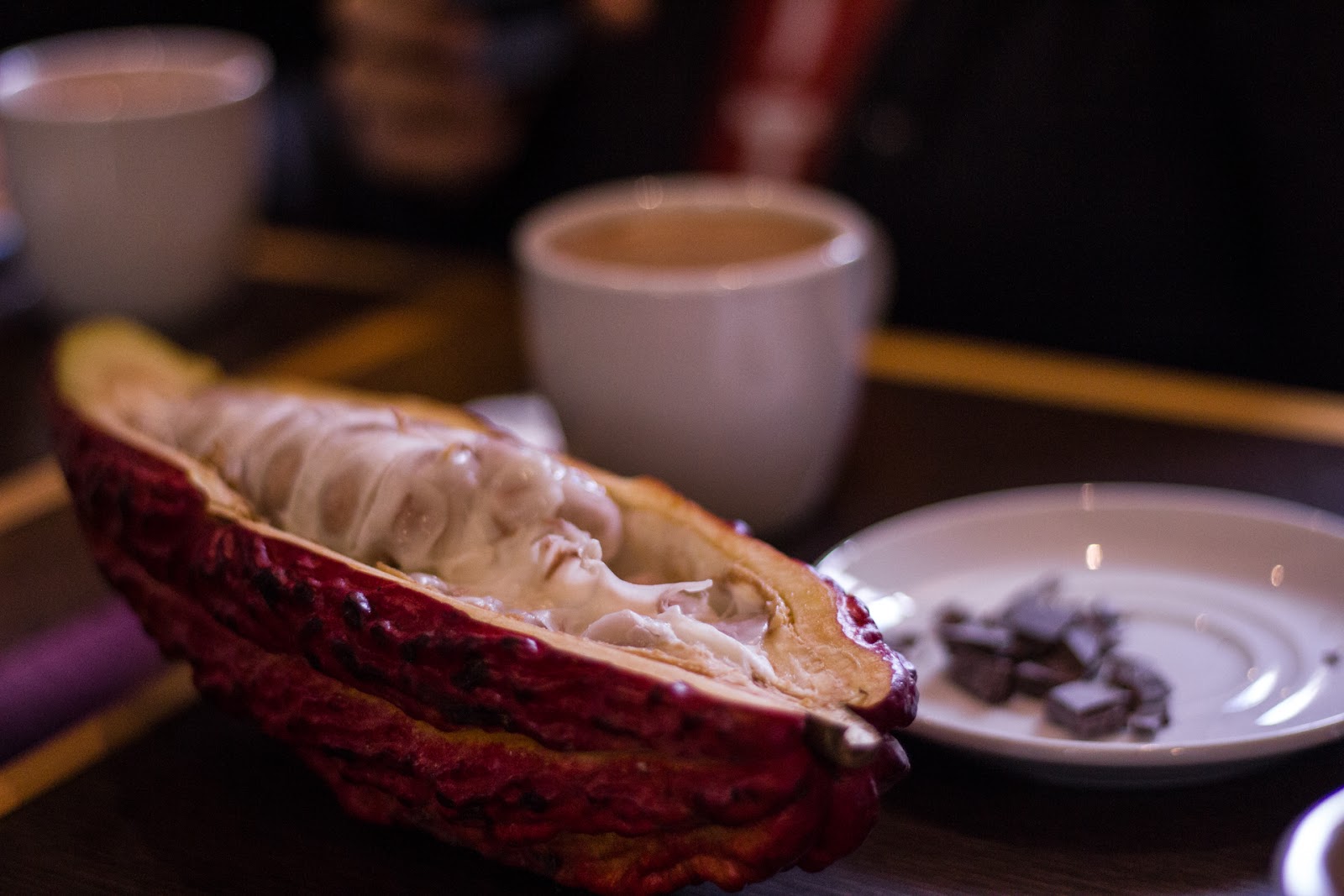 To get there, the government signed an agreement to support the farmers, if they stop cultivating coca. More than that, since 2005, the organization Distrito Chocolate is helping the farmers, so they can make a living by cultivating cocoa. For them, “Colombian Chocolate is not only known for its quality, but it is also having a social impact on the communities.”

Juan Antonio is one of the farmers, that has been elected to be the project’s leader. He told us how the project started and what changes have been made through the initiative, remembering that it was hard in the beginning to change the chip of violence and illegal cultivation. The farmers needed to be taught about the care the cocoa plants needed. In 2015, Distrito Chocolate finally got to open its first stores that sell delicious chocolate drinks and bars, made from the farmers’ crops.

Through the project, the peace and reconciliation evolved in the territory of Padua, located in Colombia’s Andean Region. “If you look at the statistics,” Juan Antonio tells us, “there hasn’t been any homicide for two years now in the district.” For him, peace is a dream coming true.

Aponte, a village in Nariño, Colombia’s western part, faced a similar situation to Padua. Here, the local people started cultivating poppy seeds. Farmers from other parts of the country came to earn money since it’s been very well paid. But with more people from the outside entering the land, which was the territory of the Inga people, their indigenous culture got lost little by little. The Inga slowly adopted the culture of the immigrants, until some people started saying “that’s not good. It’s not good that we are not proud of our language, of our people, of who we are. We are indigenous, we are Inga.”

But making a change in the community was hard. Leaving the poppy seed cultivation and going back to growing corn, yuca or peas, meant earning 250000 COP (about 73$) a month, instead of earning that money daily. Not everyone was in support of the project, some left Aponte, others stayed but didn’t agree to the change. Don Hernando, the governor of Aponte back then, today, the Leader of the Inga and of the Wuasikama project, even faced an assassination attempt with five gunshots from a short distance. “It seems like a wonder, that they have failed”, his wife, Cristina Rodriguez, tells us. Still, he kept up aiming for a change in the community and developing the Wuasikamas (Guardians of the earth) project. 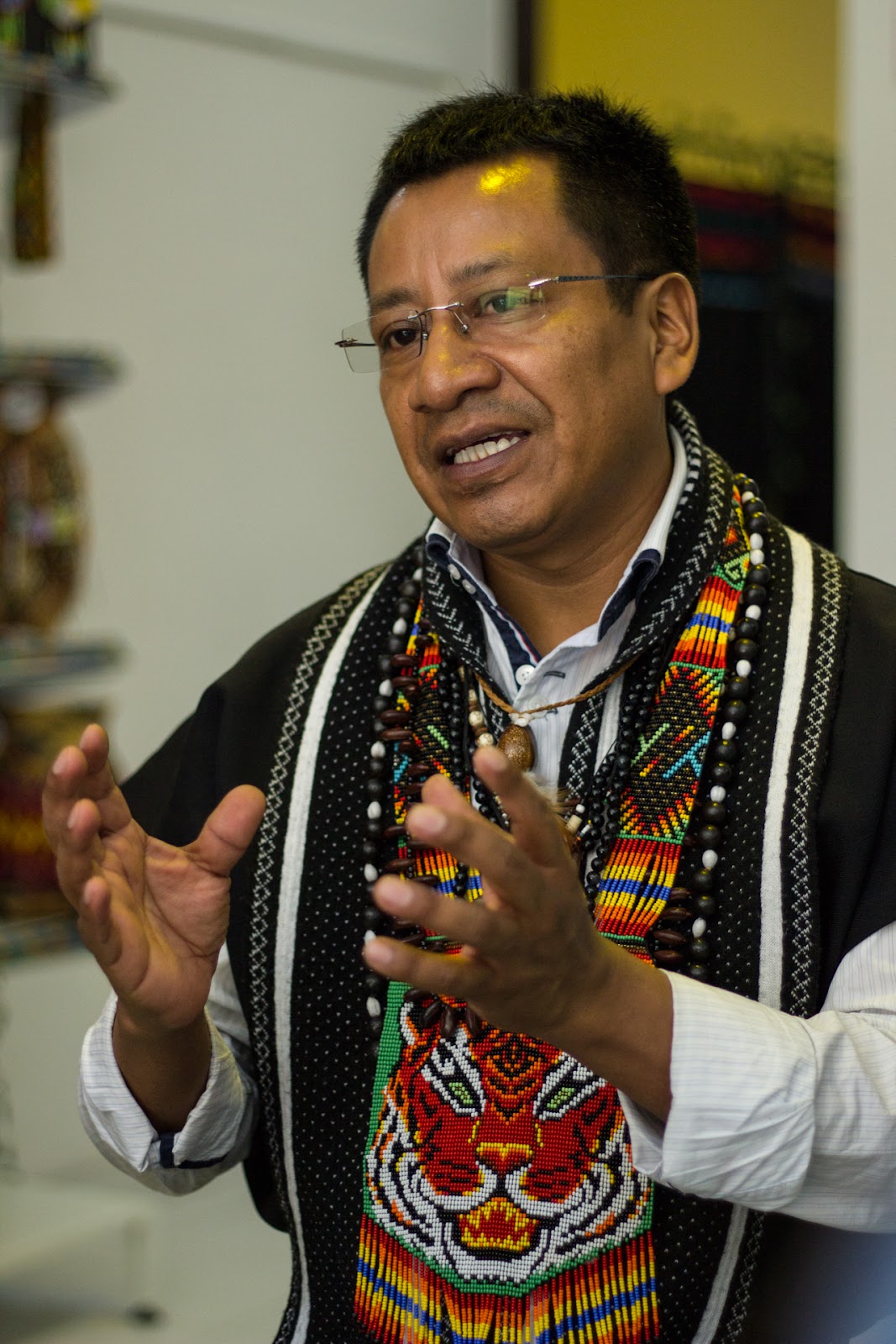 Changing the plants they were cultivating didn’t mean monetary wealth for the people of Aponte, but they got the chance to be themselves again. They revitalized their spirits, their education, and the calmness of their families, not having to fear gunshots and violence. Another problem about the poppy seed cultivation was, that these plants harmed the soil, needing a lot of fertilizer to grow. Starting off with growing coffee, the people noticed that they get to harvest only two times a year, whereas in other parts of the country coffee it’s commonly three. Cristina says “It’s because the soil is hurt. It’s the price we pay for what we’ve done before. We don’t look at it as being a result of the earth here not being fertile, but a result of how we treated it in the past.” 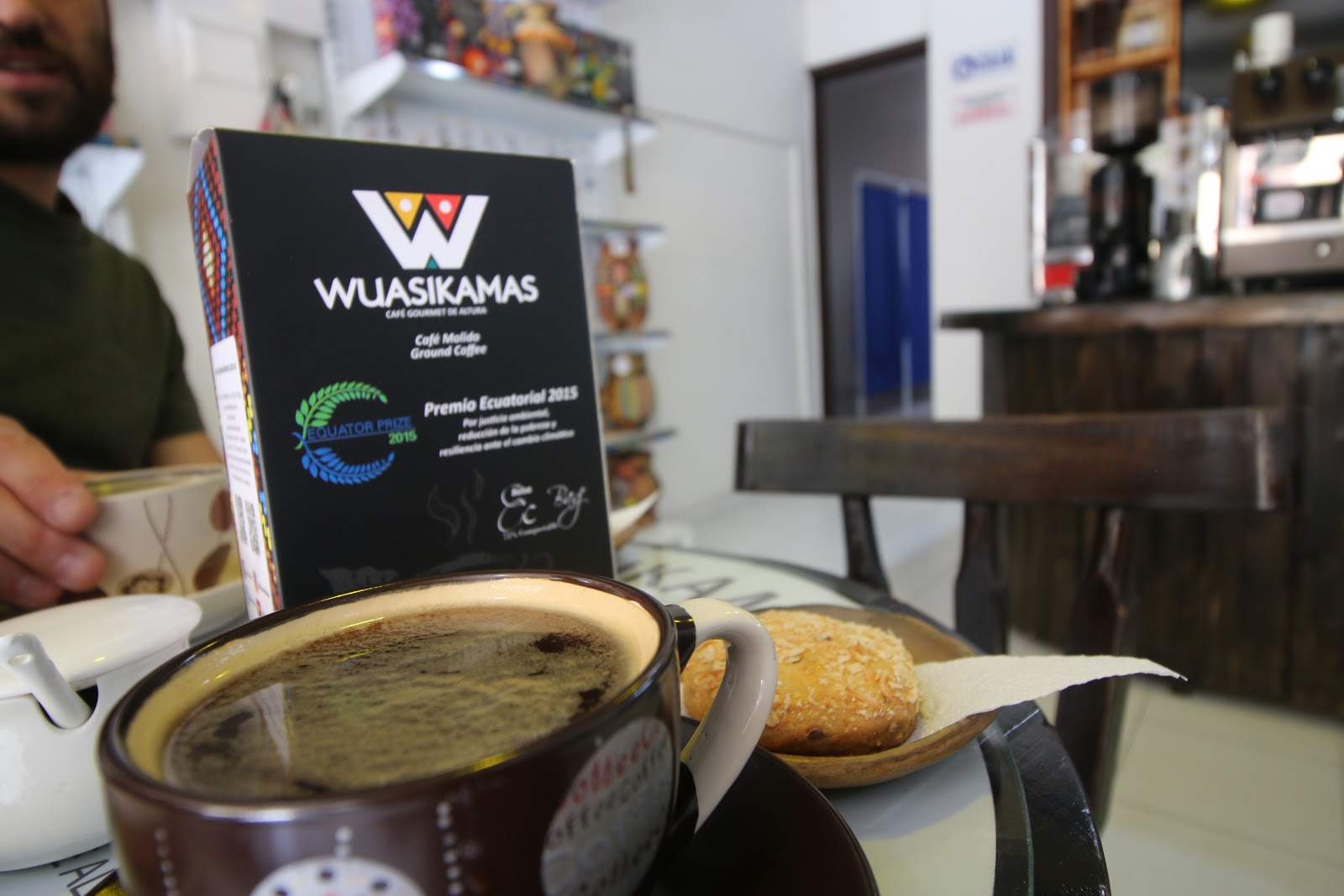 However, the Ingas have learned from their mistakes. Now, they don’t continue with a monoculture, but grow Granadilla and medical plants, alongside their high-quality coffee.
Today, in their store they also sell products of other social impact projects. The beer they offer, which is made by former guerilla fighters, is an example.

In Aponte, many people were killed by different Guerilla groups, but if the same people that have suffered most can forgive, why can’t people from the outside. “Building peace begins by not sticking to the pain, the hatred, the vengeance, but to move on, to build something new,” says Cristina. For her peace is “to move on, in spite of all the challenges that exists, it’s reconciliation, it’s love, it’s value. Racism and stigmatization still exist, but we are bigger than that. When weaving we often say let’s open this up again if we made a mistake, but it’s not about unweaving anything, but to go back and see what happened in order to heal it. Peace is to look forward, to have confidence, to build. My light can shine for other people.”

Peace can have different meanings to different people, for some, it’s a dream come true, for others, overcoming what separates us. Often, it’s a small project in the beginning, that soon includes a community, and can even change a whole country.


If you are curious to get to know the projects Wuasikamas and Distrito Chocolate better, you can contact us for more details on our Weaving Peace Tour.