Following the Trails of El Dorado: How and Why to Visit Guatavita Lake

Numerous articles, poems, and even songs have been written about it. The legend of “El Dorado” is one of Latin America’s most captivating histories and its central point is located in Colombia, just a few hours outside Bogotá.

The talk is of Guatavita Lake, also called Guatavita Lagoon. It enchants visitors with its natural surroundings and the color of the water ranging from emerald green to a clear, deep blue, depending on the season. 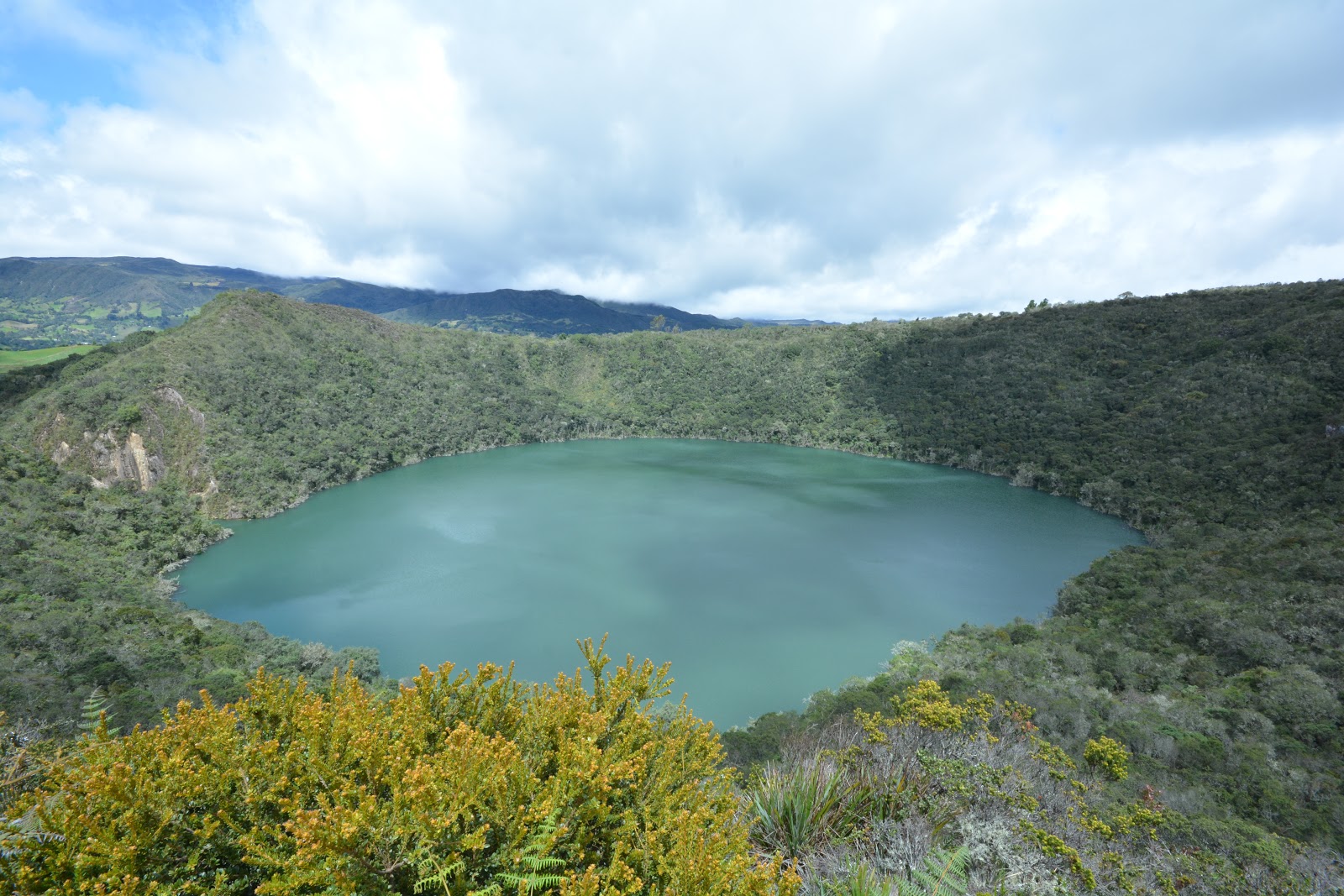 The Lagoon with a deep blue color

But the beautiful natural setting only scores the second place when it comes to the reasons why you should visit. What’s most captivating about the place is its link with the Muisca culture and the legend of “El Dorado”.The lake was a sacred place for the indigenous Muisca tribe that used to inhabit the region of modern-day Cundinamarca and Boyacá. It was the scenery for one of their most important rituals which involved a lot of gold.

In this context, it is important to know that gold was not of material value in the Muisca culture. The value of this scared metal rather derived from the figures formed out of it, that soon after their creation served as a sacrifice to their god. In contrast to the modern world, gold had a spiritual value in this culture.

The legend of “El Dorado”

As history has told us, the life of indigenous cultures in Latin America was interrupted by the arrival of Spanish conquerors. With the first attempts to colonize the tribes, they were also retrieving large amounts of gold from them. From this discovery, a story was born about a mysterious place, a lost city where the indigenous people kept all their gold. Of course, many eagerly tried their luck in finding this place as it promised endless prosperity.

The closest they ever came to discovering the golden city was when the author Juan Rodriguez Freyle, among others, described one very important ritual of the Muisca in his book. It talked about “El Dorado”, a priest or leader-to-be of the Muisca culture that sailed out onto a lake covered in gold, on a float loaded with even more gold and emeralds. These valuable treasures were then thrown into the lake as part of the ritual and sacrifice to their god. 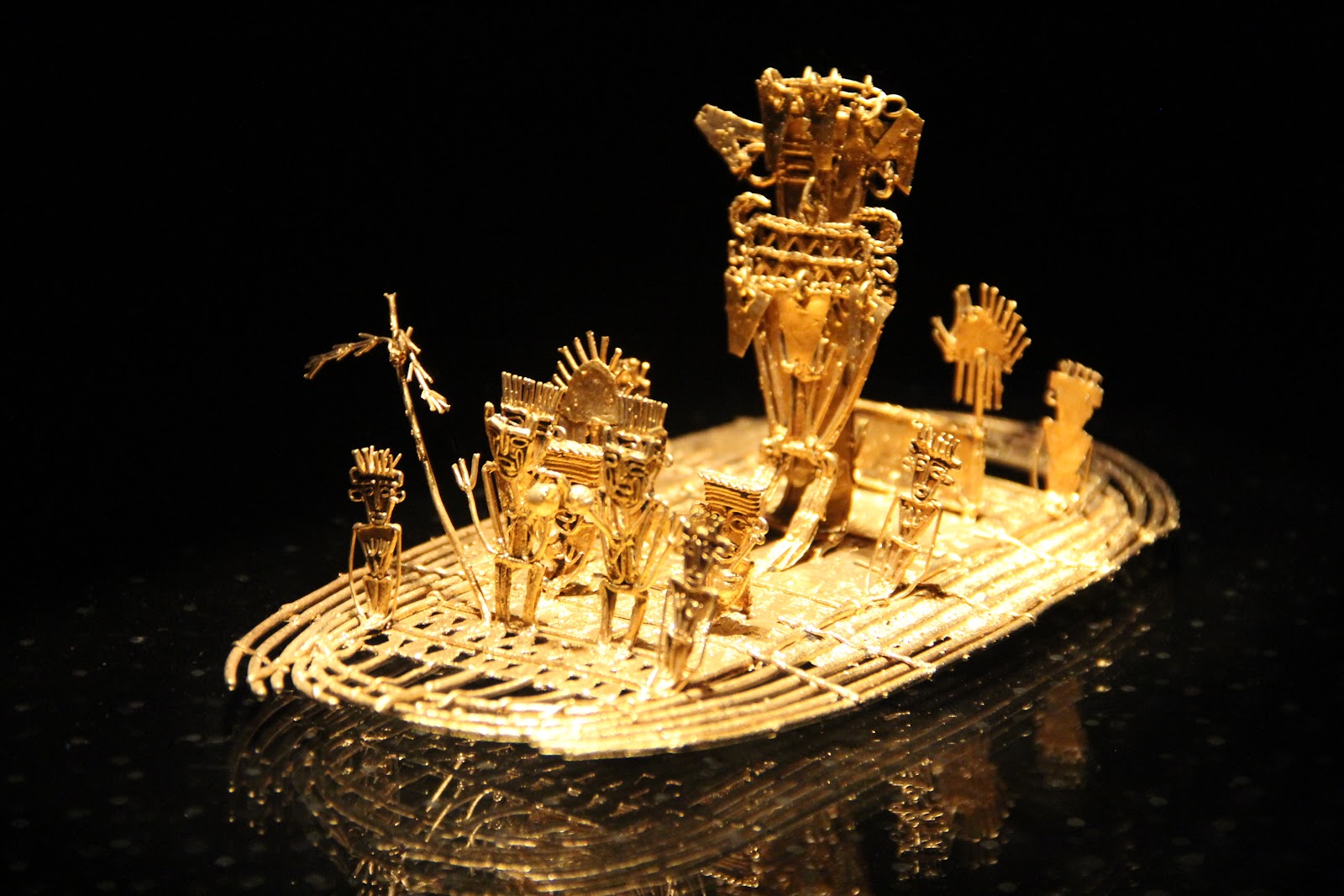 A float showing the “El Dorado” ritual, today exhibited at the Gold Museum in Bogotá

On the hunt for this gold lake, the Spanish discovered Guatavita lake which had been the scenery of such rituals. Trying to recover the gold, there were several attempts made to empty the lake. The most successful one lowered the water level by only 50 centimeters. However, some gold pieces were found on the sides of the lake. The hunt for gold at Guatavita ended in 1965 when the site was named natural heritage, preventing anyone from trying to drain it again. Today, it’s one of the most popular places to visit around Bogotá.

How to visit Guatavita

Guatavita is not only the name of the famous lagoon but also of a village that’s located close to it. If you want to visit the lagoon, the easiest way is to take a bus there and continue the trip to the lagoon from the village. From Bogotá, there are several buses per day that take you to Guatavita. The pick-up is at  Cra. 7 #72 and the bus ride will cost you about 7.000 COP (US$ 2.15).

Depending on when you arrive, it might be a good idea to spend a night in Guatavita and visit the lagoon the next day, as it is only open from 9 am to 4 pm. This way you also get to discover the small town a bit. Some people decide to camp slightly outside of Guatavita but there are also some rooms available in the village itself. 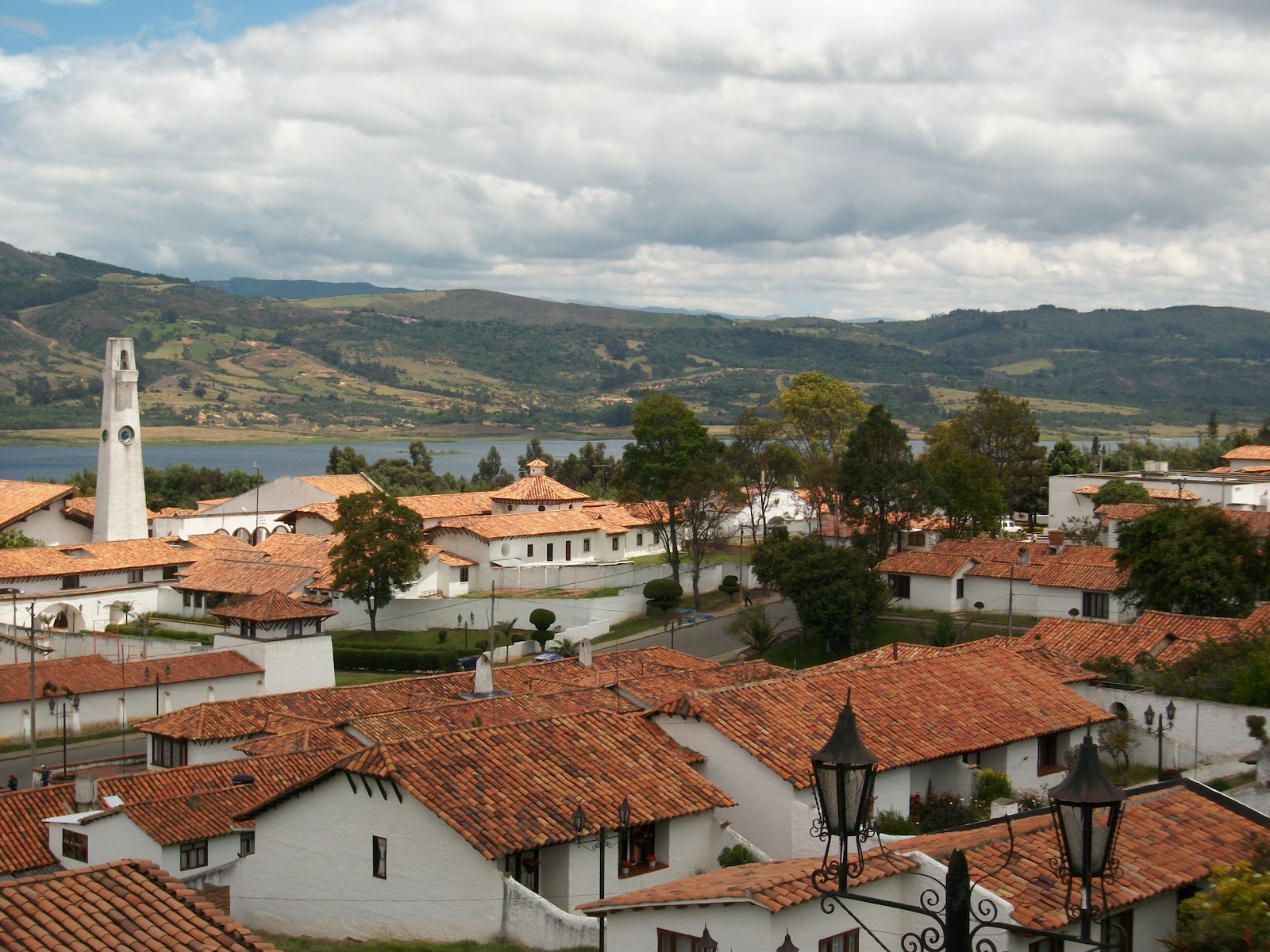 The small town of Guatavita

The village of Guatavita is located next to another lake that was created artificially by the people living there. They were in need of an energy source and decided to drown their village turning it into a lake and reconstructed their houses at the side of it. This admittedly unusual plan resulted in a commonly shared architecture among the core part of the village. All the houses, as well as the church and public buildings, are white-washed with terracotta-colored, moss-covered roofs which gives the village a magical touch.

Around the various town squares, there are some handicraft stores and small cafés. Guatavita also has a free museum that is basically a café that exhibits some of the old figures from the church. However, the real sight here is the village itself. Time runs slower in Guatavita which is a nice contrast to the buzzing city life in Bogotá. Once you have discovered the narrow streets, you can also take a walk down to the water to watch the sunset. 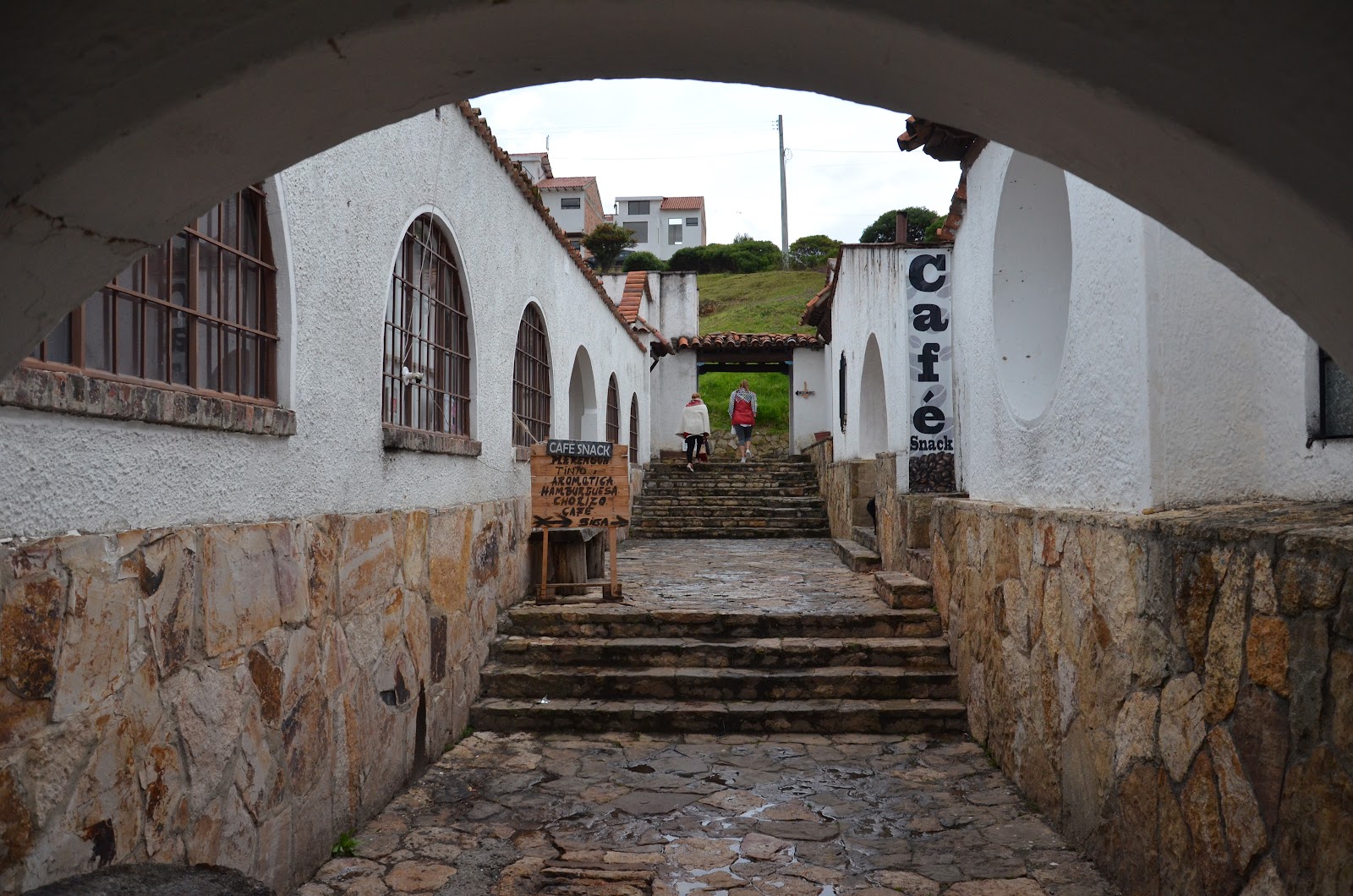 A small street close to the center in Guatavita

Insider Tip: On Saturdays and Sundays, you can buy typical Colombian drinks and food like canelazo, homemade ice cream, coffee and obleas at “la ventana”. Literally, a small window where its owner, Angie, tends to visitors on the weekends. Sit down at the little bench behind her house and enjoy the stunning view.

From Guatavita it takes about 30 - 40 minutes in bus to get to the lagoon. After paying the entrance fee, you will be led through the area by a guide who will let you in on some of the ancient Muisca traditions and beliefs. The last part of the small hiking track goes steeply upward until you reach the border of the lagoon. The moment you reach the top of the hill and get a first glance at the impressive lake is breathtaking. The majority of the year, you will see the lagoon in an emerald green color, due to the algae that grow in the water. In December and January, the lagoon has a beautiful deep blue color. 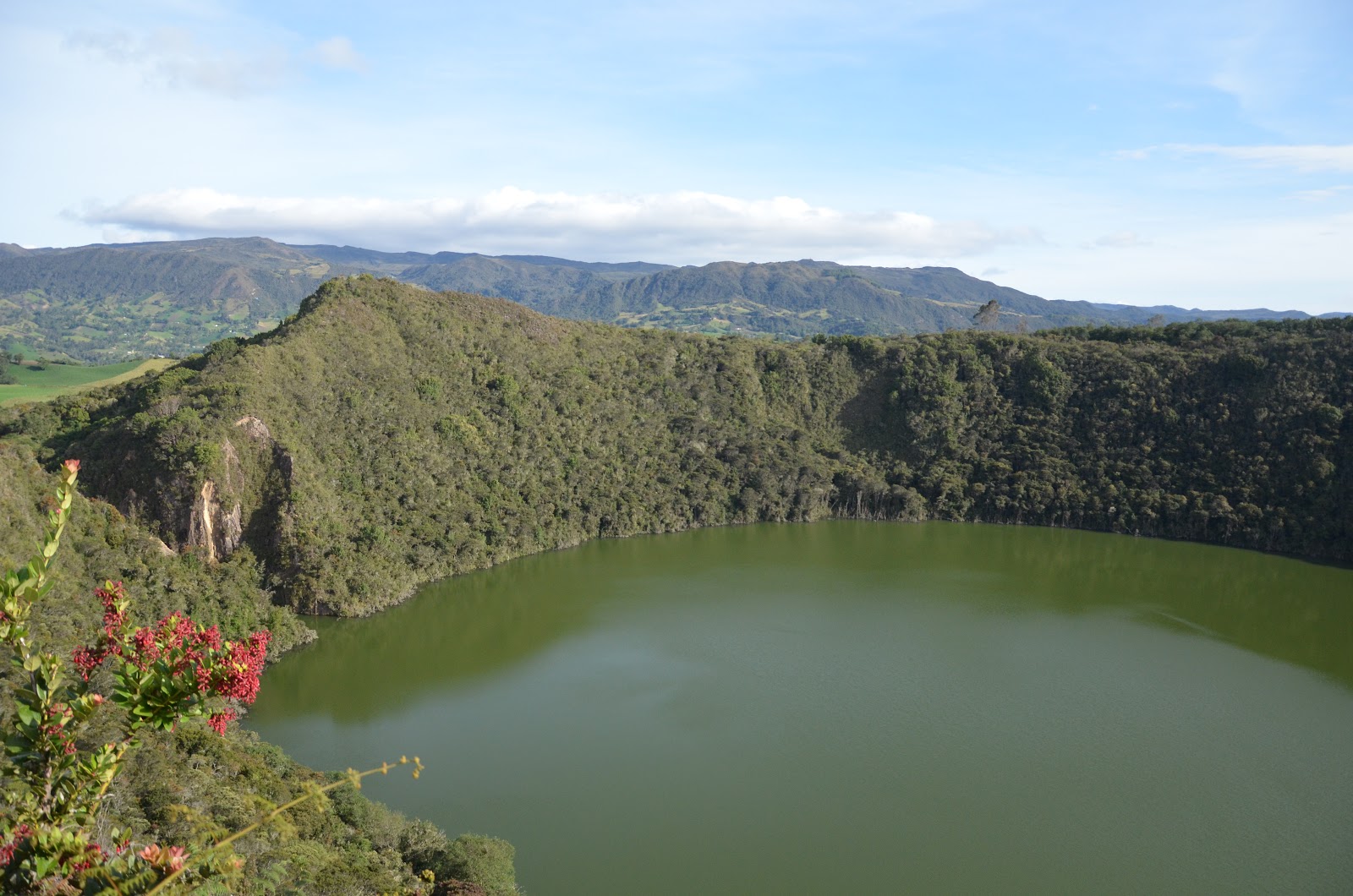 The Guatavita Lagoon with a beautiful dark green color

Wandering on the trails of “El Dorado” is one of the most fascinating things you can do around Bogotá. The tales of a long forgotten time will astound you and offer you a look at the incredible indigenous past of Colombia and the crazy hunt for gold by the conquerors. However, closing with the lesson that the guides teach you at Guatavita, “el verdadero El Dorado es el pensamiento”. The real El Dorado, meaning the real wealth of the Muisca, was not gold but their culture and their way of thinking.


Check our tour to follow the trails of El Dorado at Guatavita here!

Transport to Zipaquirá and Guatavita