Medellin’s development is often referred to as an urban miracle. The former world's most dangerous city is in the midst of a transformation that has earned it the title of the world's innovative city of the year in 2012 (by Wall Street Journal) or 2016 the “World City Prize”. IMPULSE Travel presents a three-part series, published in a monthly cycle, which illuminates various aspects of the city’s transformation through the last years. The first part emphasized economic growth and innovative development. In this second part, we take a closer look at the areas of architecture and infrastructure. 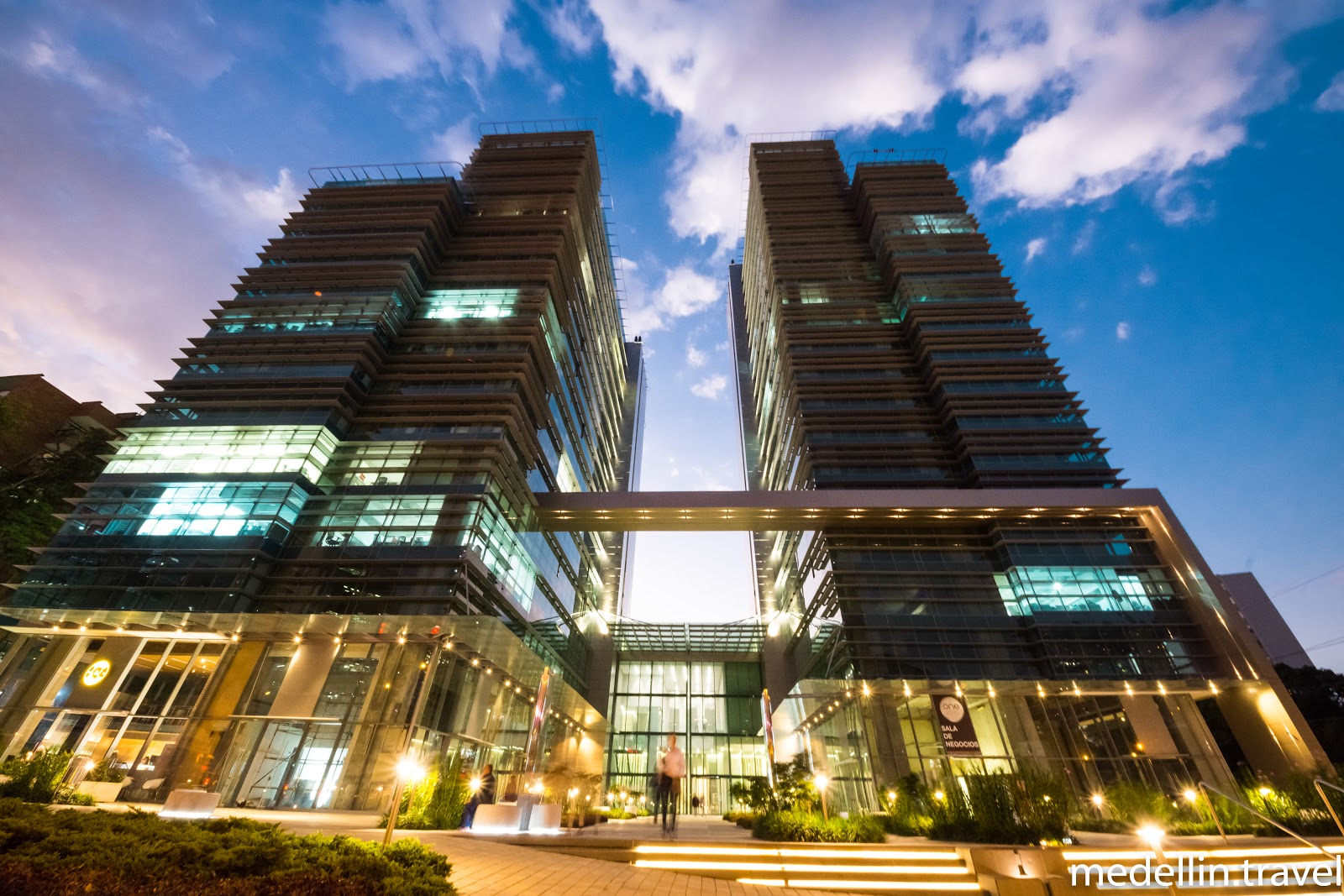 The rise of Medellin is not only because of the decline of the drug cartel. Rather it is due to a series of innovative urban development projects for example the urban transformation which was achieved through the integration of the Comunas on the steep slopes of the city by innovative ways of transport.


Infrastructure - the key driver to success

Medellin's Metro, which runs above ground, traverses the city from north to south. It is the only metro in Colombia and possibly one of the cleanest in the world because it is strictly controlled that nobody eats or stands around for no reason. The Paisas appreciate their Metro. The bright stations and the courteous cooperation of the passengers are striking. Even 20 years after the opening graffiti or other traces of vandalism can hardly be found and pride and gratitude flash in conversations with the local community. The Metro has long since become the backbone of the New Medellin. 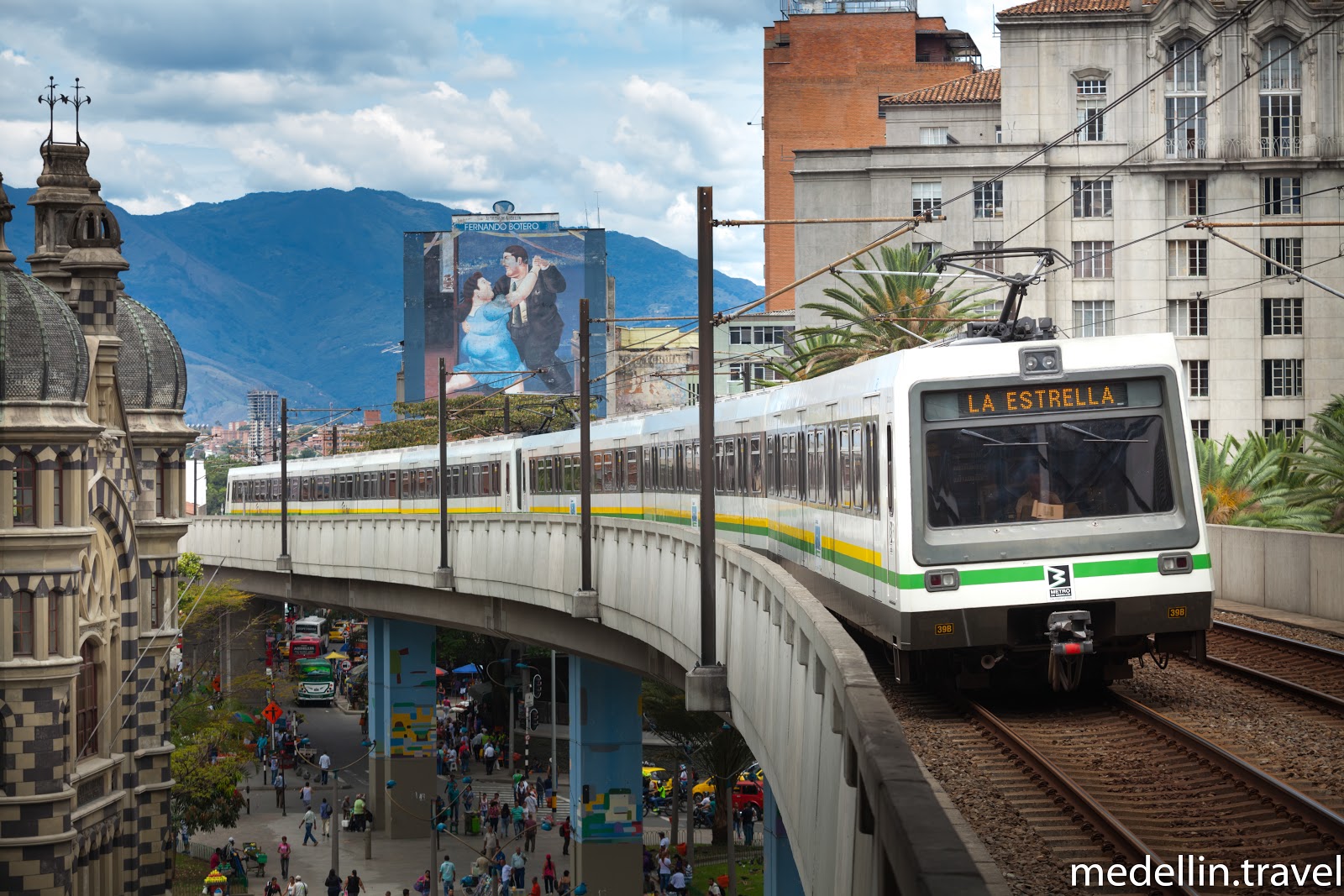 Today Medellin's public life can no longer be imagined without the metro - it has become a symbol of it's resurrection, creating identity and linking the city not only geographically, but also socially.

Medellin is surrounded by the Andes and, as it is often the case in South American cities, the poor part of the population lives in barracks on the slopes. This geographical separation from the center of the city in the valley increases the demarcation of the economical lower classes because the road to better paid jobs and to educational institutions is long and arduous. The cable car solves this problem. It is directly connected to the subway and thus makes it easy to reach even the most remote parts of the city.
However, the aerial cableway has brought about a significant improvement in living conditions. It opens up part of the once secluded slum with metro stations in the valley, where many jobs, nice restaurants (for an extraordinary culinary experience in Medellin click here), offices and shopping facilities are located.
In the meantime there are several gondola lifts in the city. They are used by commuters whose everyday life has been simplified by them, before the way to the valley used to be dangerous and took a long time. 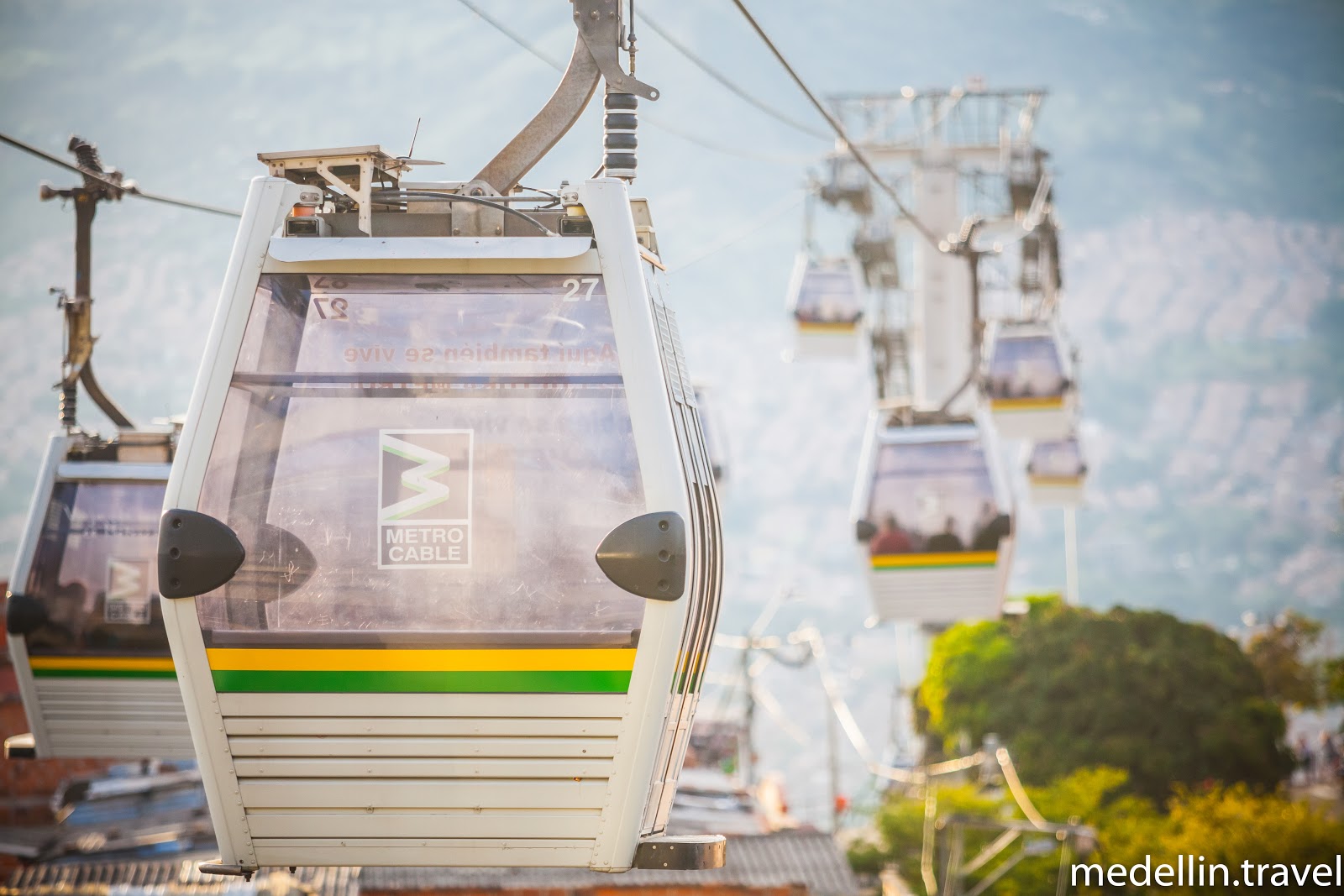 Thanks to Metro and Metrocable, the inhabitants of the mountain hut settlements on the mountain slopes now also have direct access to the resources and jobs in the inner city - legal jobs as an alternative to a career in the drug and crime network.

Another impressive measure to improve the infrastructure of the city are the escalators in one of the outskirts of the city. They cover a distance of 384 meters,  replace steep and daring steps that climbed up the hill as a narrow corridor between precarious superstructures meters and are one of the first outdoor escalators in the world. The $5 million project is located in one of the city's poorest and most dangerous neighborhood - the Comuna 13 (more about this neighbourhood here). The escalator has made it easier for 12,000 residents to access their homes and improved their safety. They also benefit from the lively business life that has developed around the escalator with its shops, restaurants and of course because of the tourists.

Newly constructed buildings with geometric shapes, luxurious constructions of glass and metal, illuminated by a variety of advertising spaces: Medellin is doing well. Politicians often emphasize the city’s development to a dynamic metropolis and commercial center at the forefront of progress. Furthermore the city is filled with tourists strolling across the Plaza Botero.

Medellin is an outstanding example of how architecture can be used to combat crime and poverty: Parks, museums and centres were created in the immediate vicinity of the stations, easily accessible to all. They create spaces for encounters which are actively used by the inhabitants of Medellin. Furthermore, the city government erected public buildings in particularly dilapidated areas, provided paint to decorate the houses of citizens in the slums and cleaned and repaired the streets. All this effort is made in the belief that if people are treated with dignity, they will appreciate their surroundings and develop pride in their communities. 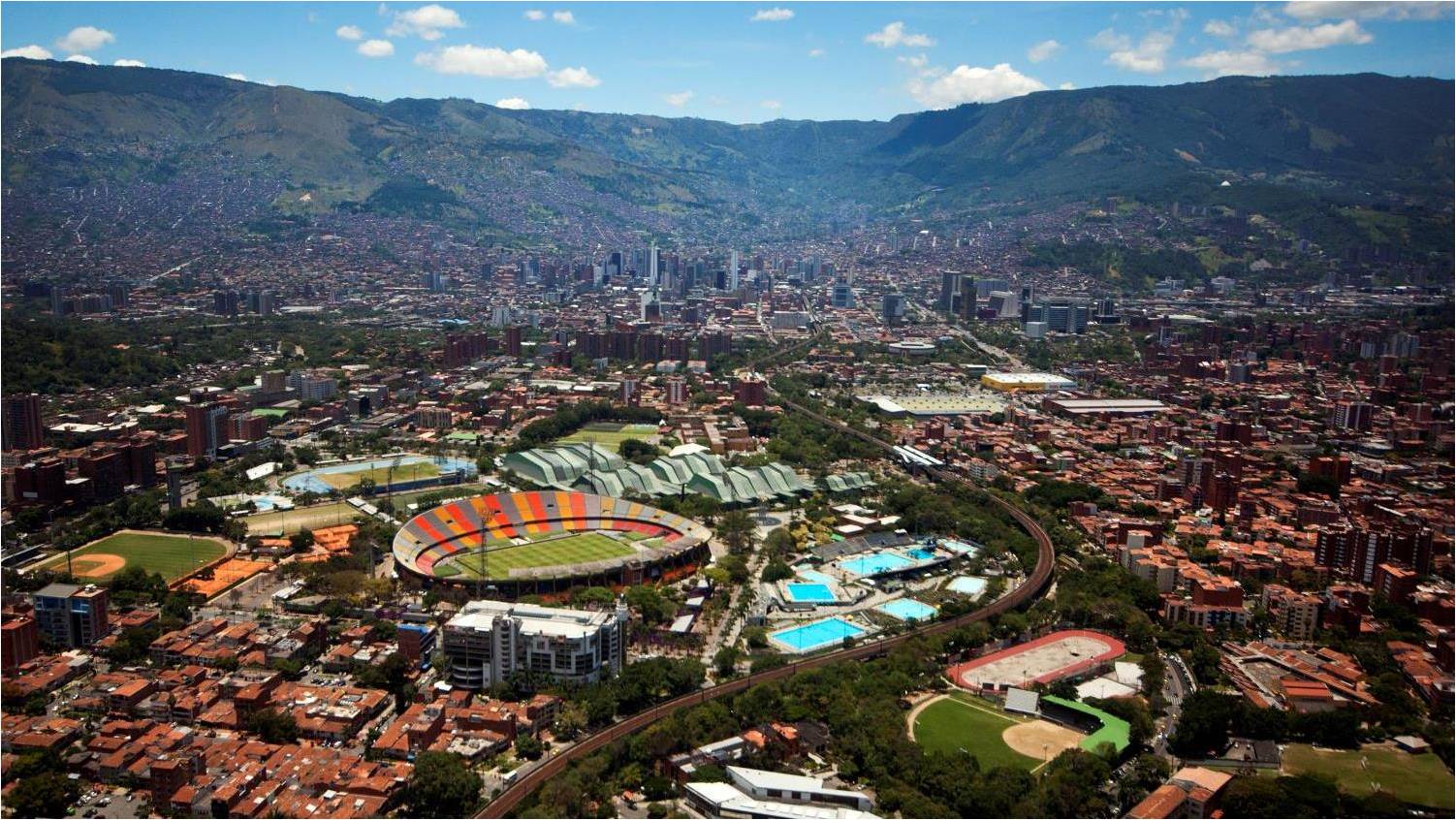 Medellin has many green areas and recreational offerings

Other projects are the dozens of libraries, parks and playgrounds were placed in problem zones by the city administration. The construction of libraries, schools and monuments in the slums prevents people with lower socioeconomic status from being completely isolated. In addition, the neighbourhoods are invigorated by tourist flows and the water, electricity and gas supply even reaches into the slums of the city.

The Plaza de los Luces is another perfect example of this “social architecture” or how architecture can be used to combat crime. Once this was one of the city's drug trading centre and not even the police dared to come here. Then the place was transformed into a tourist attraction or at least in a place where one feels comfortable and where no dark corners exist anymore for dodgy businesses. 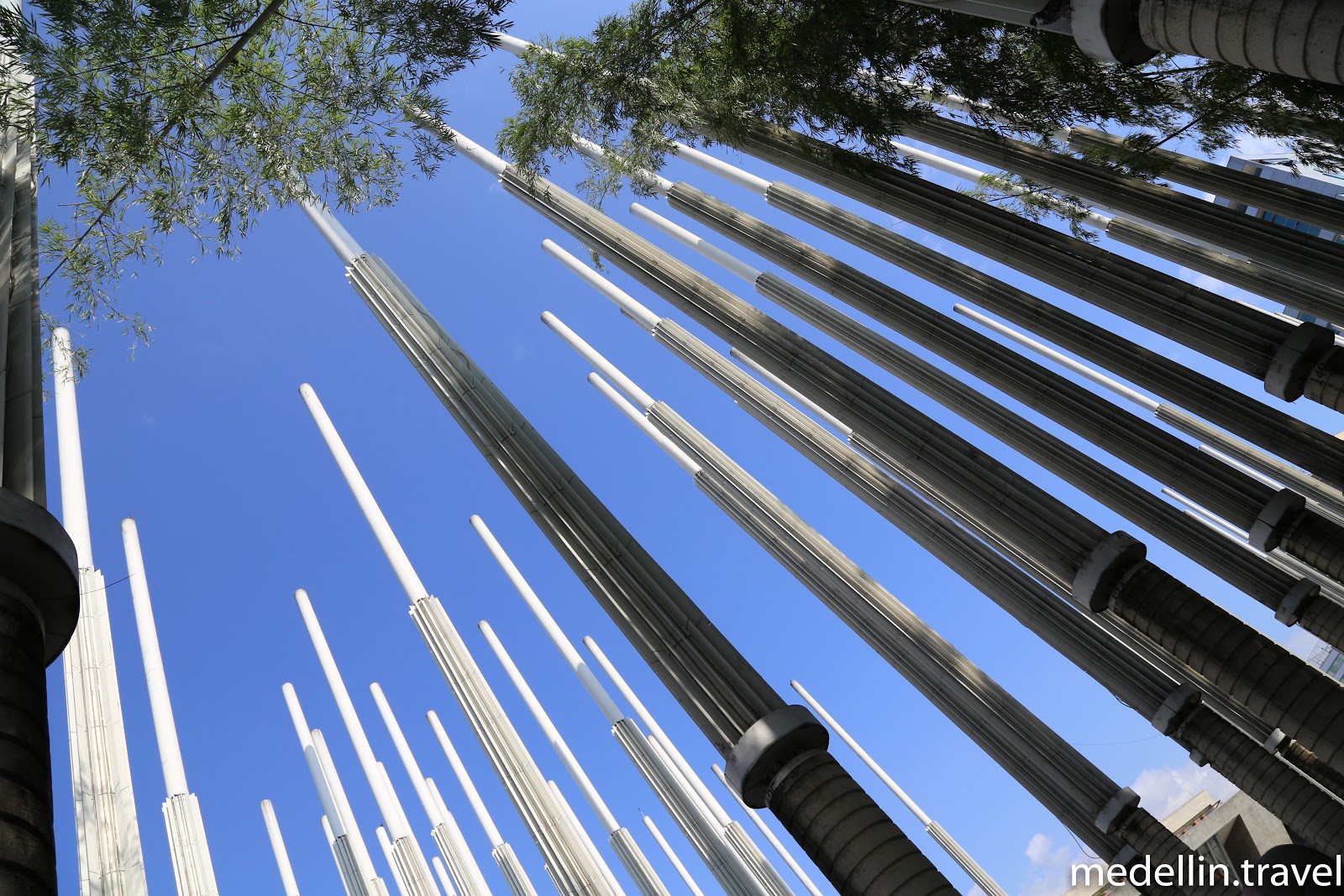 The Metro, the Metrocable and the electric stairways upgraded not only the Comunas as part of Medellin, they contributed to a higher quality of life. It followed the changing connection of the mountain settlements to the centre of the city down in the valley. Additionally the other projects of “social architecture” have shown how powerful public space can be for the inner peace of a city.