To celebrate Halloween we have brought you a blog about Colombia's historic cemeteries. Less spooky but more impressive and definitely worth a visit!

Halloween, Day of the Dead and All Saints’ Day celebrations are imminent, which means we’re fast approaching the spookiest time of the year. As opposed to engaging in any trickery, we summoned up a sweet little treat in the form of our newest blog.

Colombia’s tourism is booming exponentially and many rightfully flock to the most well-known natural wonders the country has to offer. However, many aren’t aware of the fascinating cemeteries tucked away in our most popular cities. Cemeteries of such grand scale have a morbid beauty in their celebration of life and legacy.

As the trope goes, only two things are sure in life: death and taxes. Due to its inevitability, the presence and celebration, or rather commemoration, of death is an important insight into any culture. 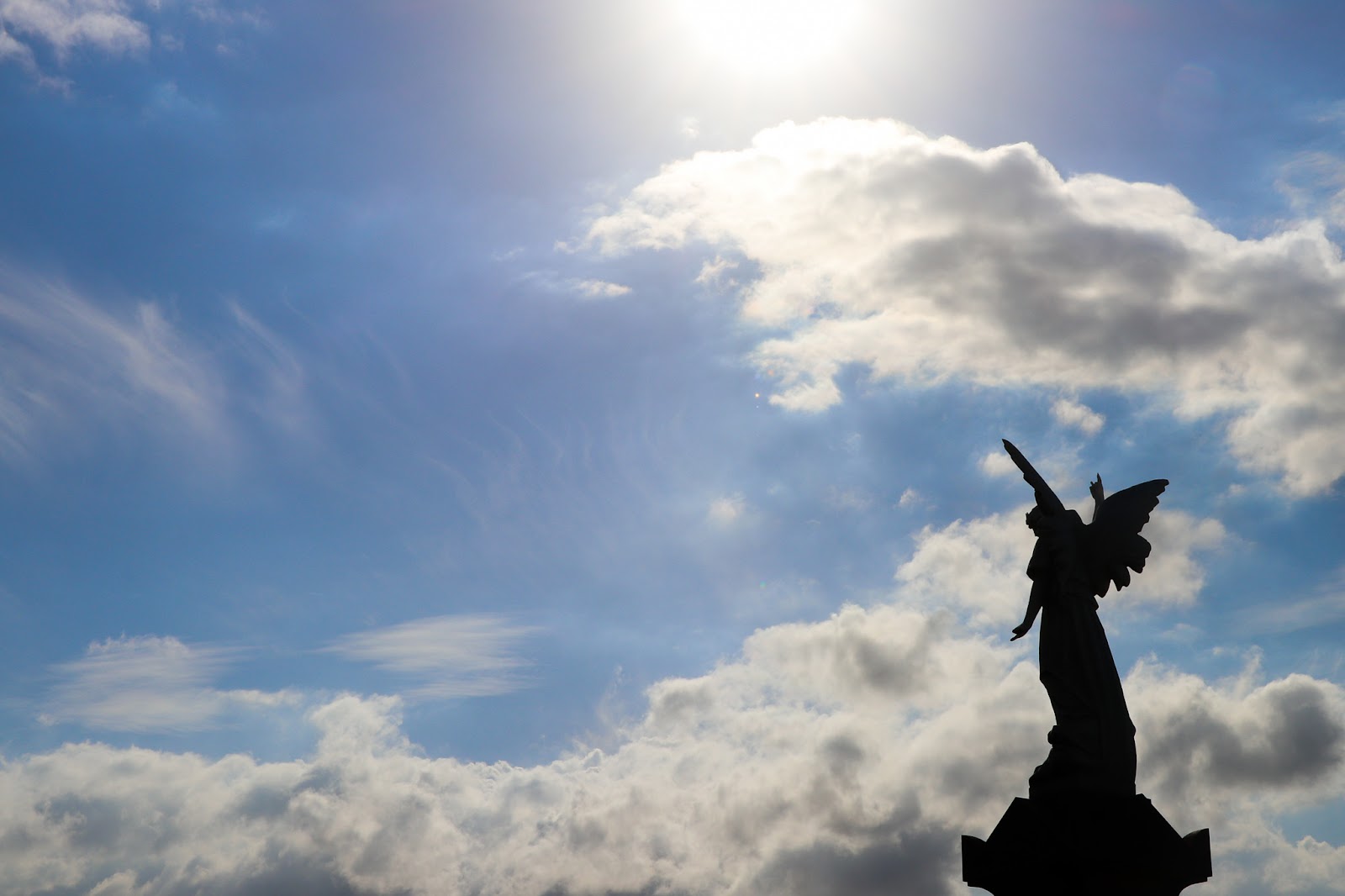 
For most, death is a taboo topic and cemeteries were historically a type of city-cleansing, pushing the diseased and departed out of the city bounds, with no concepts of modern health.

It is this history that Eloisa Lamilla Guerrero explained to us this week when we paid her a visit. With a rich education in anthropological studies and a specialization in the areas of the patrimony, cultural heritage and rituals, both locally and abroad, Eloisa is a certified expert in all things death. 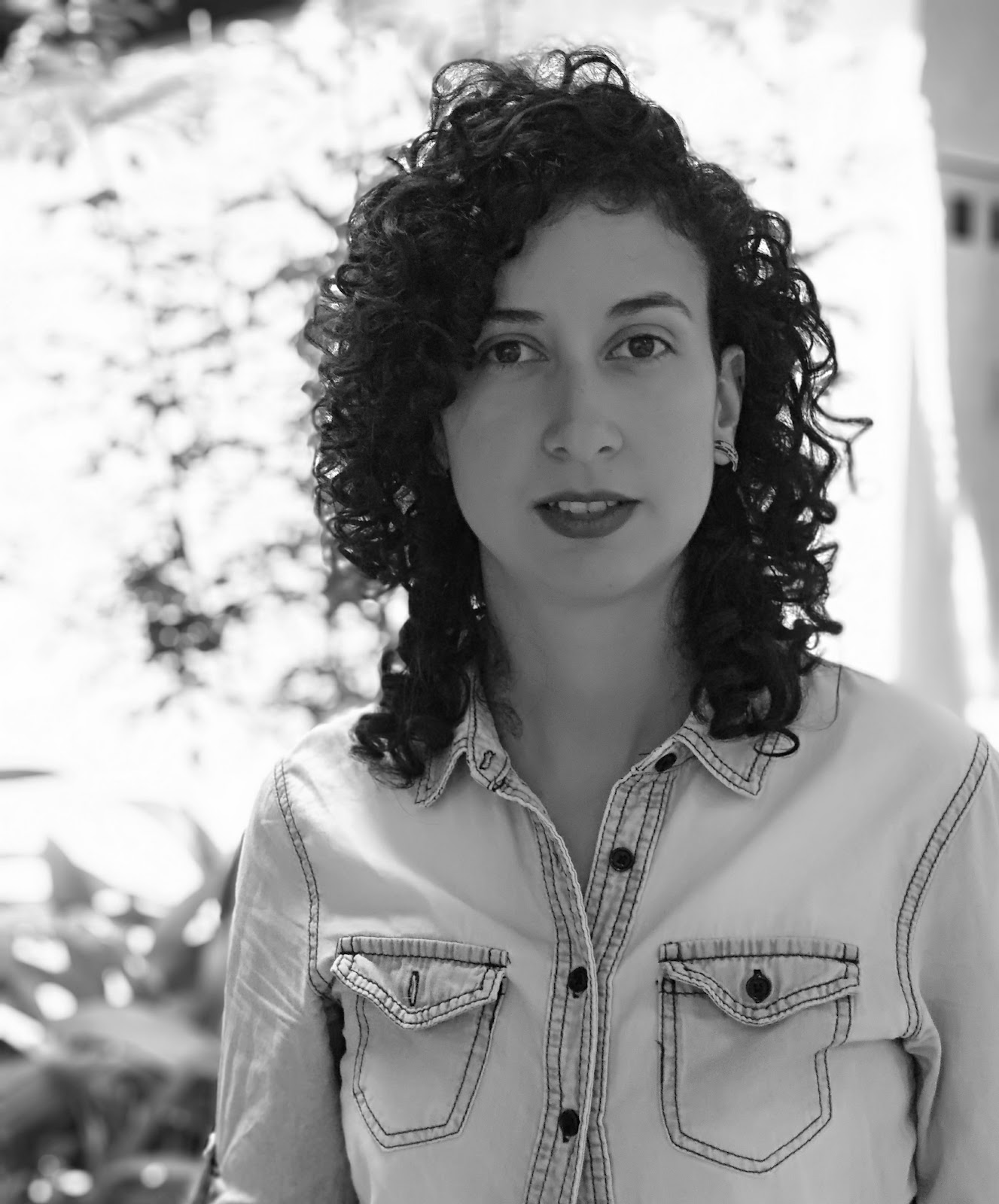 Eloisa emphasizes that cemeteries are small cities within themselves, microcosms of the larger city and broader society in which they are situated; a city of death. There is real estate, architecture, and hierarchy. They are a new style of a tourist city, where you can see, touch and experience everything the culture has to offer without inhibitions of social interaction. Inherently, personal experiences that still connect you with a community and past lived experience.

Beyond the spiritual and human experience that cemeteries provide, they are a source of architectural art, which is especially true of many Latin American iterations that evoke brighter colors and liveliness to the celebration of the dead.

We’re going to share everything from the most peculiar superstitions and tales to how you can best explore these sites for yourself! 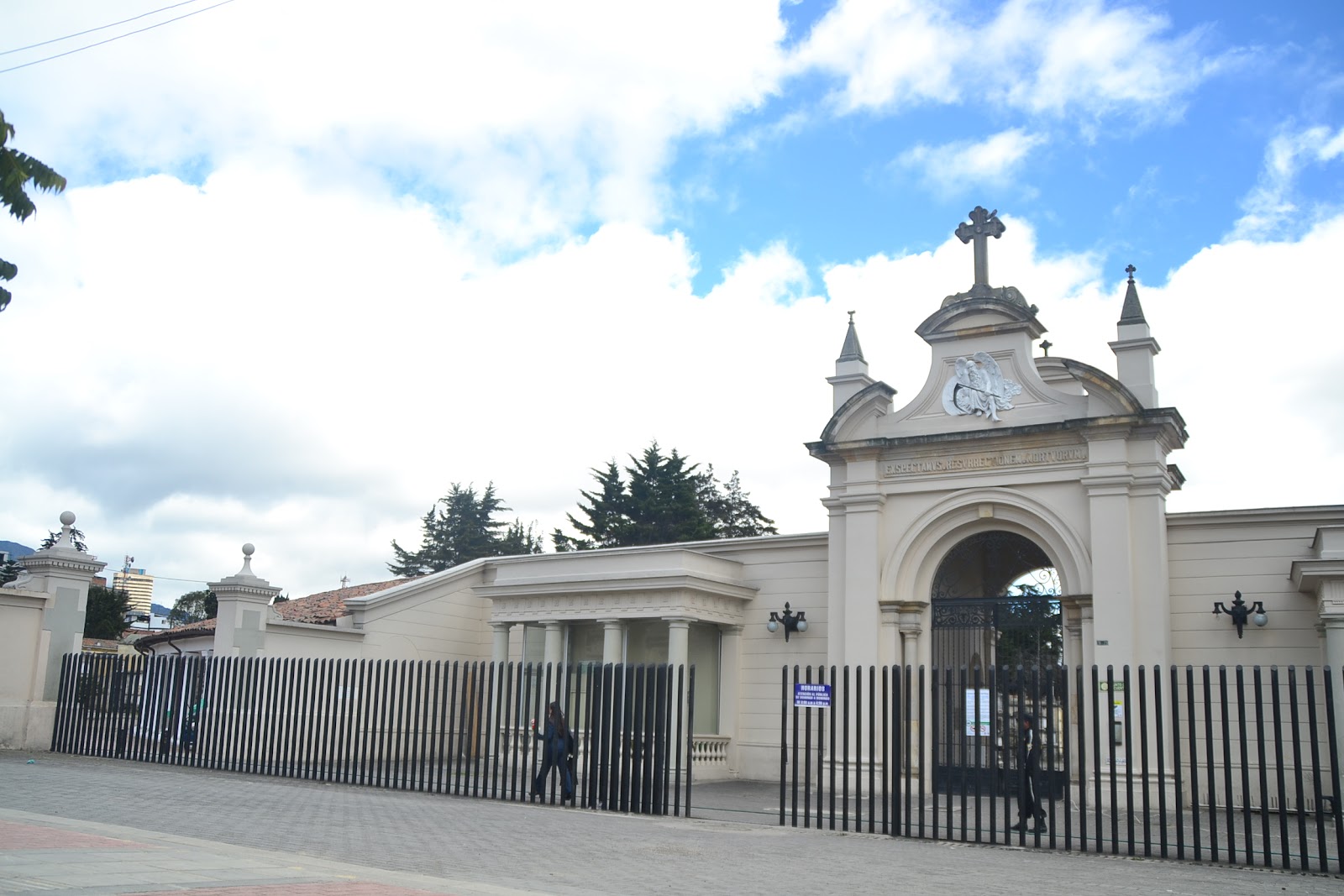 The entrance of Bogota's Central Cemetery

This public cemetery opened in 1836, following Colombia’s break from Spain. As the capital, Bogotá is inherently packed full of figureheads. However, the history entrenched in cemeteries makes them archival, allowing an insight into centuries of life and death along with the generational cultural changes that have transpired to create the society we see today.

We’ve all heard the common trope that everyone is equal after death, yet this is tainted by the idea of wealth and heritage. The main drag upon entering the Central Cemetery is the resting place of presidents of eras past. Winding out from this illustrious center, the tombs progress from wealthier families to the bodies of those of more modest means on the peripheries; a mirror of the social statuses of the living.

For you superstitious travelers, there exist a couple of hot spots with a mythical history. A prime example being ‘the Caracol’, a winding metal staircase that descends into an underground chamber. It is said that there you can find a white light and that it is a place of dark magic and voodoo practitioners. 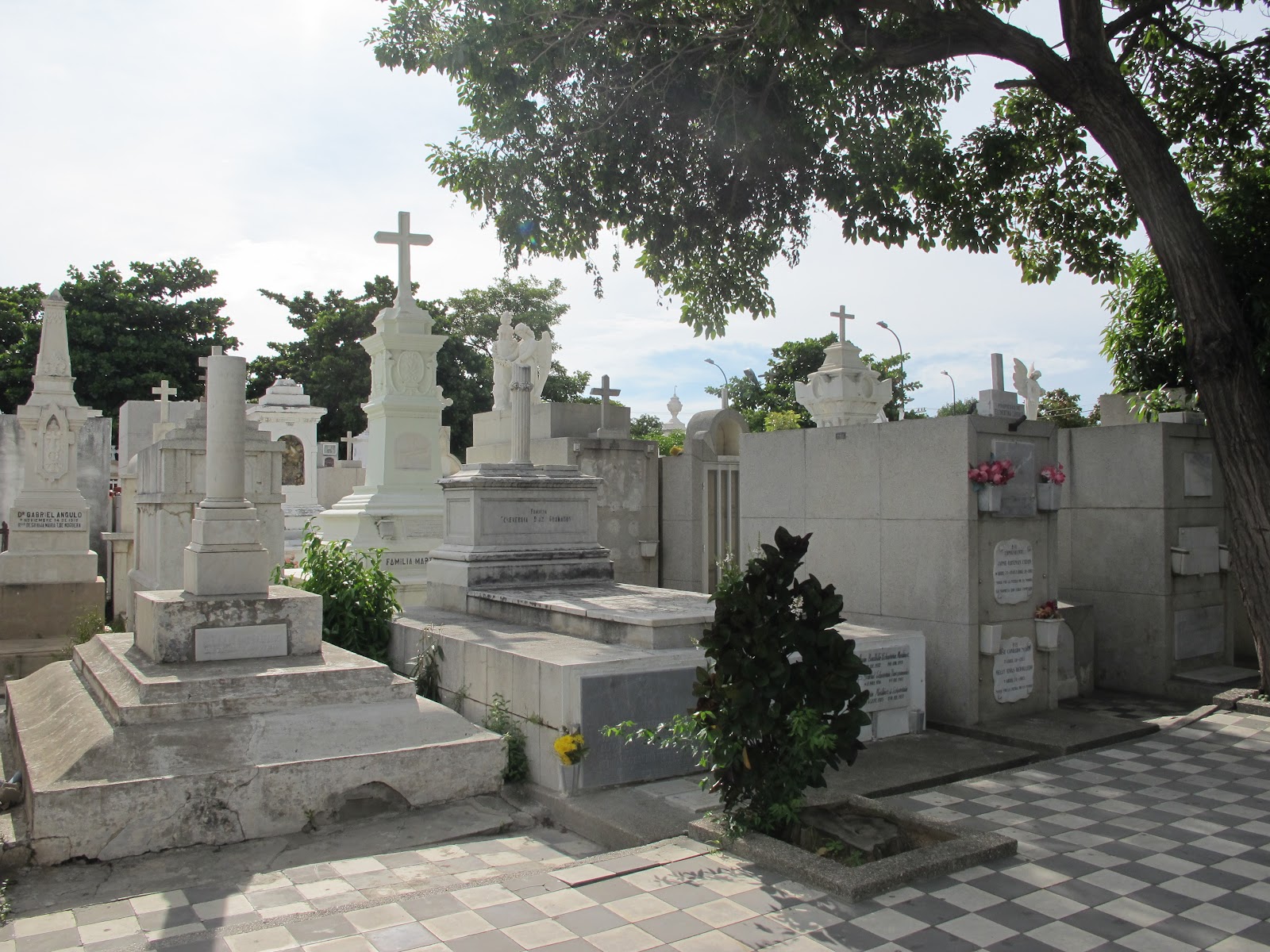 Although superstitions run deep in any cemetery, they offer an open space for enriching travel experiences

Bust out your Colombian pesos folks, because the graves of a couple of the famed faces are found in this cemetery. For example, the grave of astronomerJulio Garavito Armero, the man on the 20,000 peso bill. José Asución Silva, a formative 19th-century gay writer who was a victim of suicide whose face is on the 5,000 peso bill, also resides in this Bogotá cemetery.

One of the must-sees of the cemetery is Leo Siegfried Kopp, a German businessman who immigrated to Colombia to establish Bavaria, one of the biggest breweries in the world. Finding a Jewish-German Saint in the heavily catholic Colombia is shocking to some, and it is said that whispering wishes in the ear of his statue brings good fortune.

Another Kopp fun fact is that his marketing strategies are the reason for the Colombian slang for beer, ‘pola’. Named after Policarpa Salvarrieta Rios, a hero of the revolutionary period of the early 1800s, Pola has since become the main term for beer (or cerveza) in Colombia. Who would’ve thunk it? 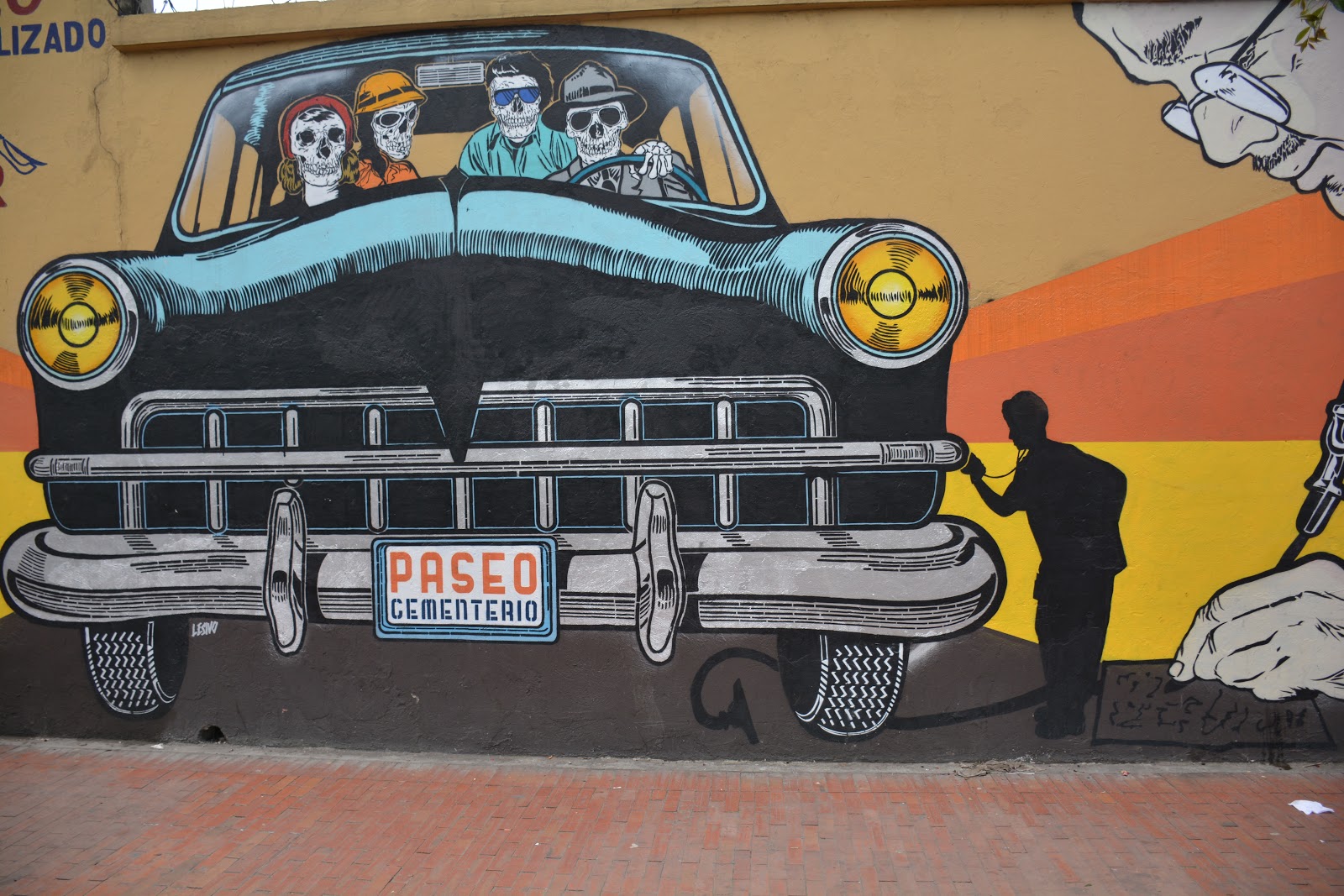 Check out our Street Art Tour to pass by the cemetery and find out more from one of our passionate tour guides.

Cementerio Central de Neiva
The town of Nevia itself is a great hidden gem tucked away in la Huila, one of Colombia’s south-western Departments. 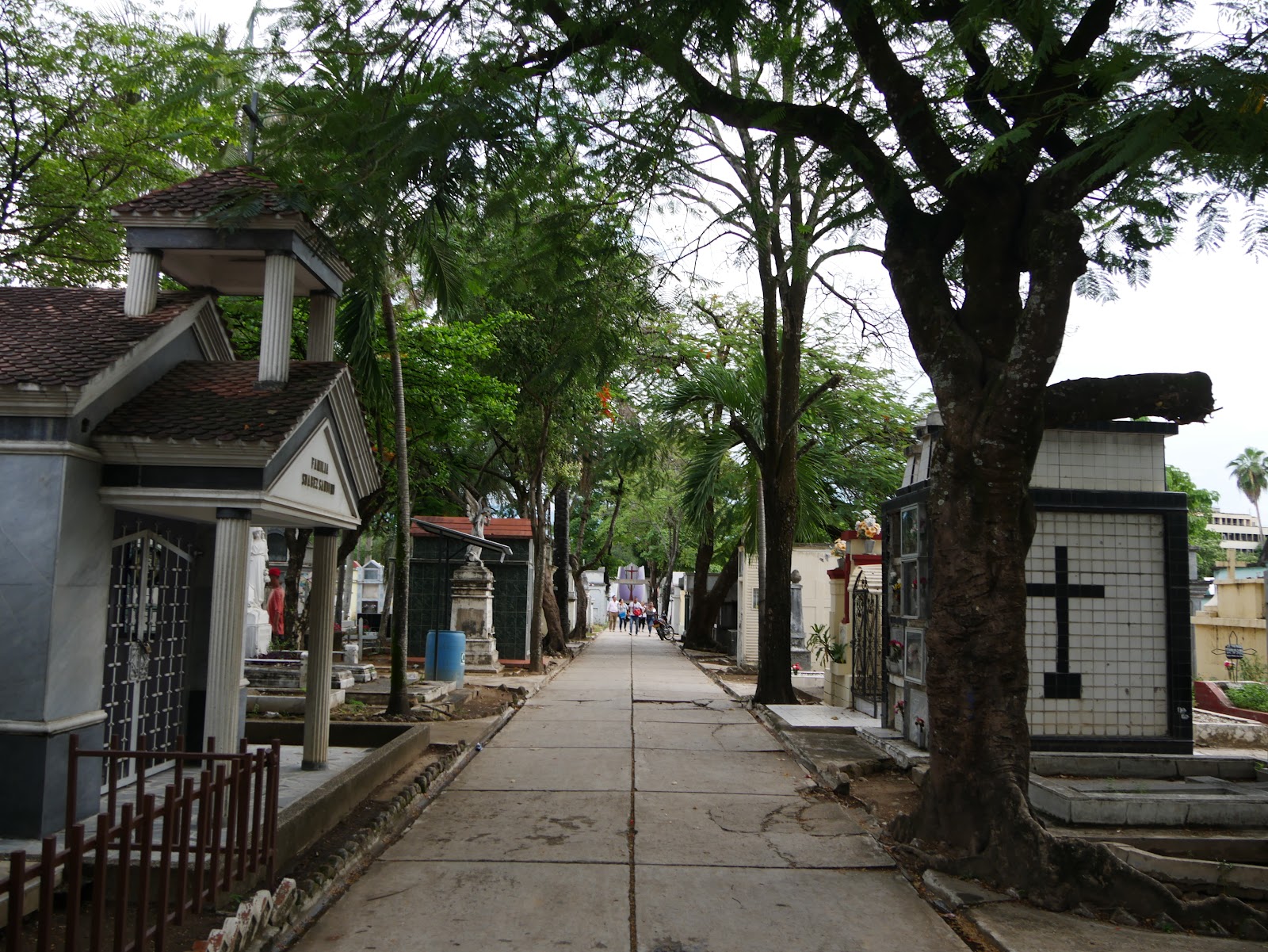 Eloisa grew up in Neiva and it subsequently became a great focus of her thesis and studies, as she rediscovered the overlooked value of the town’s cemetery and church space. Nevia houses the most important pre-colonial cemetery in Colombia. Smaller towns further emphasize the importance of cemeteries, which regularly become apart of the tourist track.

Ask locals for the most important graves to visit, as this can reveal a lot about the culture of a country itself. Who we worship and why - these are important insights into a society and its values. Cemeteries such as Neiva's are open museums, spaces of culture, art, and architecture. For that reason, it is important to engage with everything the cemetery has to offer as opposed to simply running to the one grave you wish to see. 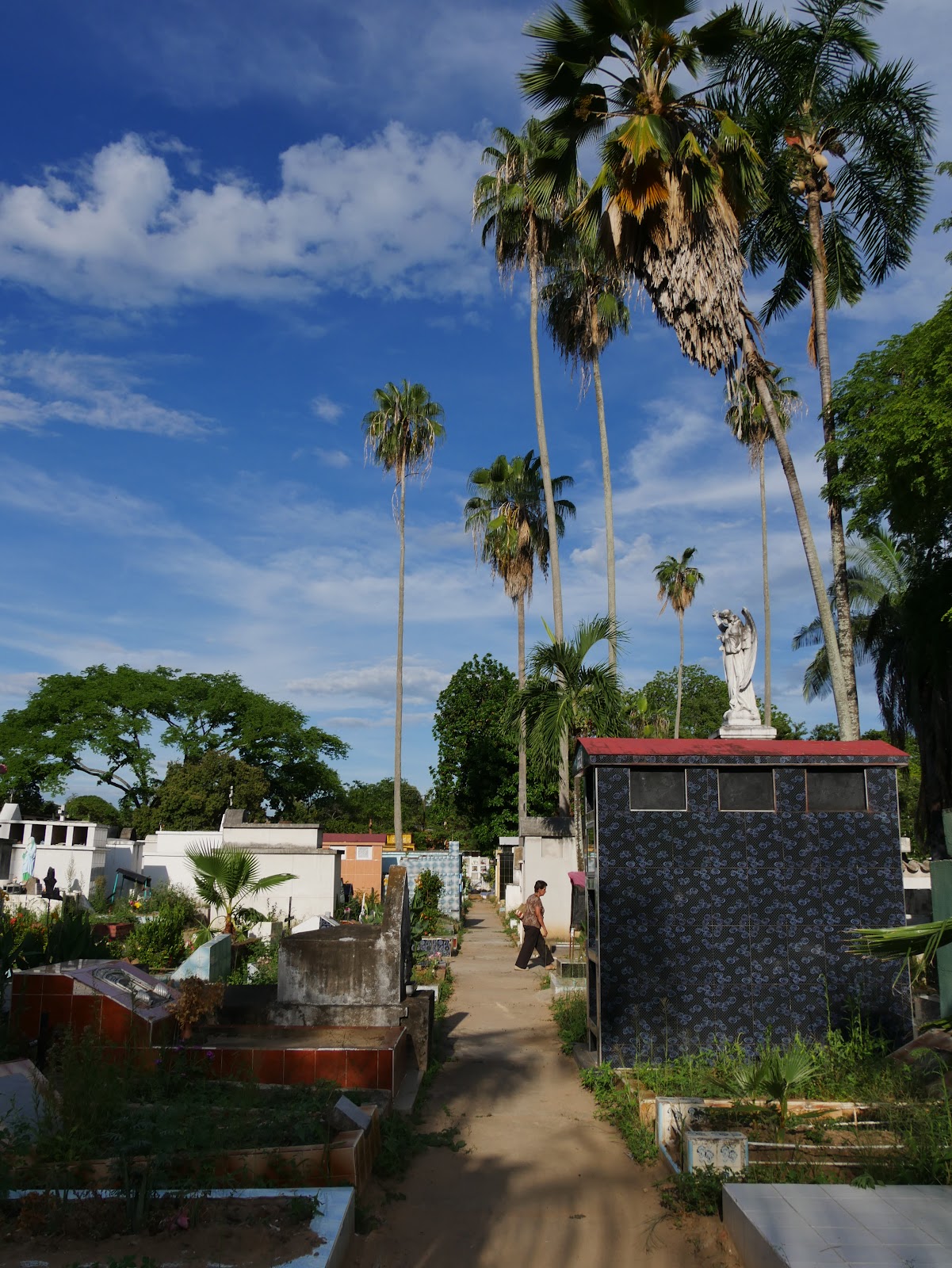 The greenery of Neiva makes it a beautiful spot

Rituals are an enormous part of every culture, and insight into these practices is fundamental to comprehending how a culture operates and the values they favor. These customs show how to express love and devotion on a deeper level, as well as providing moments of union, whether it be within families or the broader community. 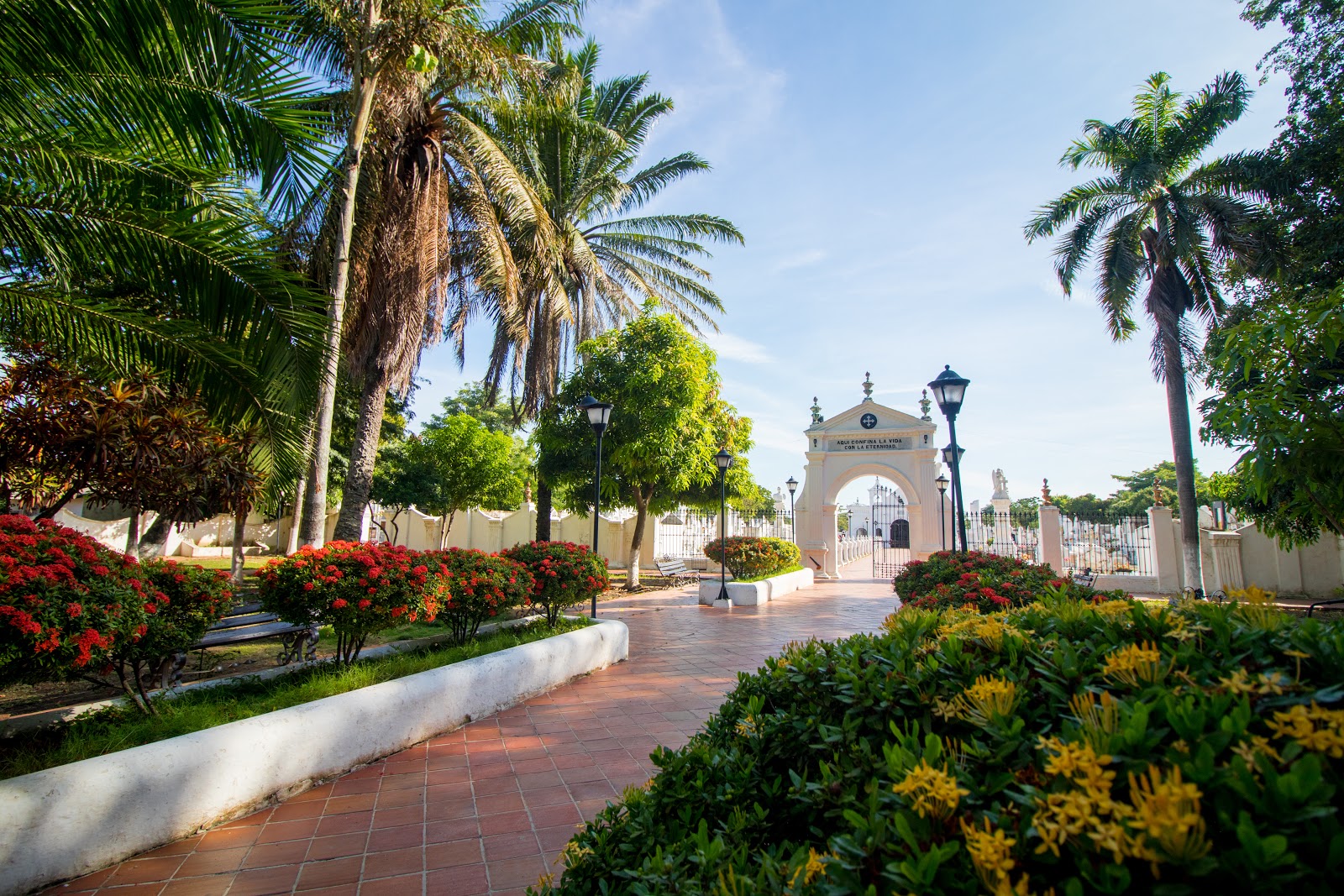 The entrance to Mompox Cemetery

With the bright Caribbean sun beaming down on the piercingly white tombs and statutes, this cemetery is straight out of a film. However, those with cat allergies (or phobias) should be aware that cats ‘guarding’ the cemetery are endemic. 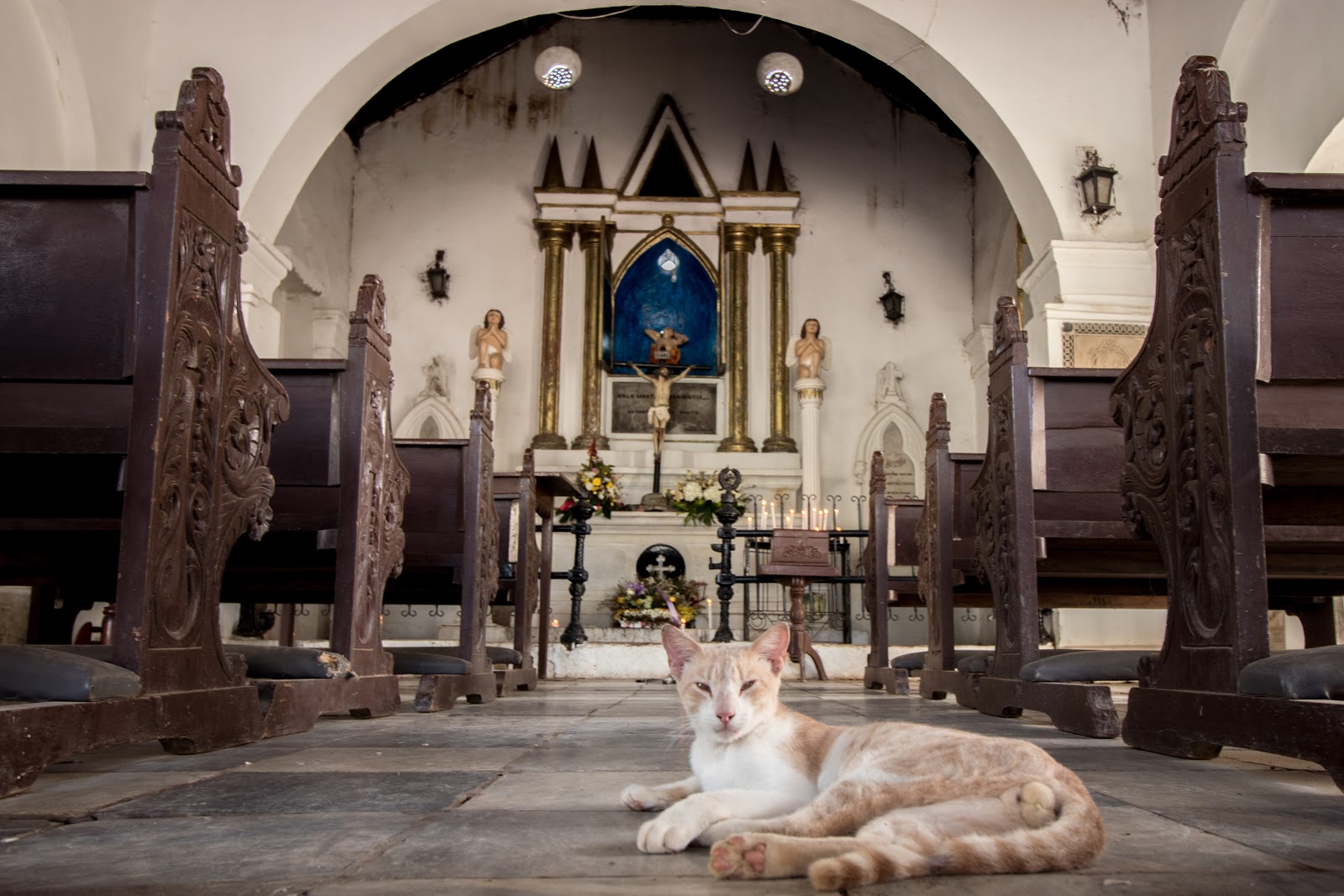 Cats guard every corner of the cemetery

Like all cemeteries, that of Mompox offers everything, including typography, iconography, calligraphy, architecture, and design. Construction of the cemetery began centuries ago, with connections to the history of this location as independence from the colony. However, it wasn’t until later, in the earlier part of the 1800s, that the cemetery was officially completed. The history of Mompox as a town is deeply intertwined with the cemetery, giving greater significance to the resting place.

Religion and tradition are highly important in Colombian culture and through the commemoration of their dead, you will gain a deeper understanding of Colombian tradition, engaging with an aspect of our culture. 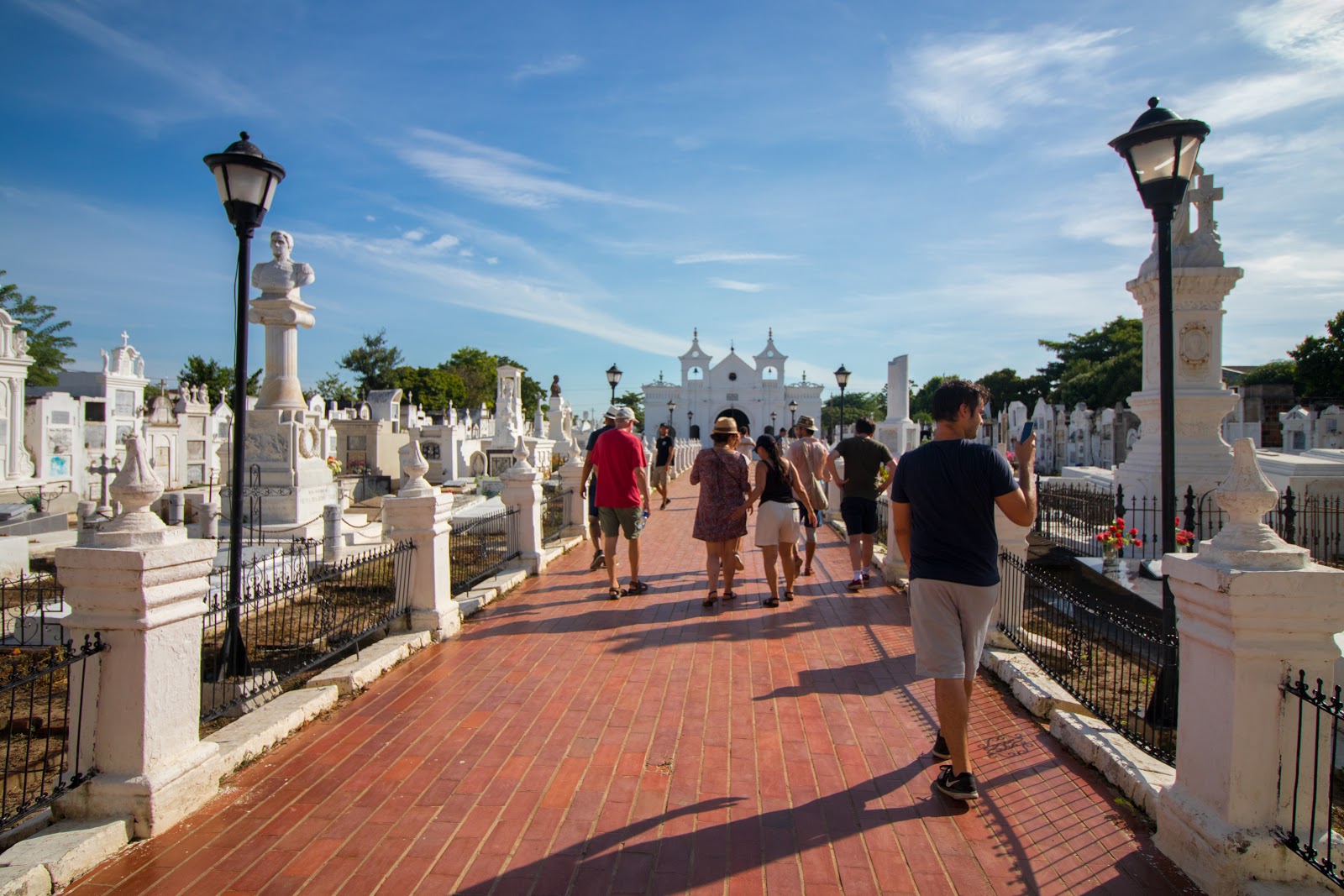 The iconography selected for the graves to celebrate lives allows greater discernment of the life of the person and the values of their family. Icons and religious figures such as La Virgen de Chiquinquirá are staples of Colombian religious culture, being associated with ideas of protection.

Mompox has a tradition that every 2nd of November, they host a night for the dead, which you could join if you’re there on time.

Otherwise, make sure to check out our fantastic Sounds of Colombia tour that makes a stop at the infamous cemetery.

The private cemetery of San Pedro de Medellín is home to Colombia’s first cemetery museum and is thus an absolute must-see! Having previously worked within the cemetery, Eloisa emphasizes its importance as an academic institution. The dedicated guides and extensive research of the institution provides a model for the successful organization of a cemetery as a cultural and informative space. 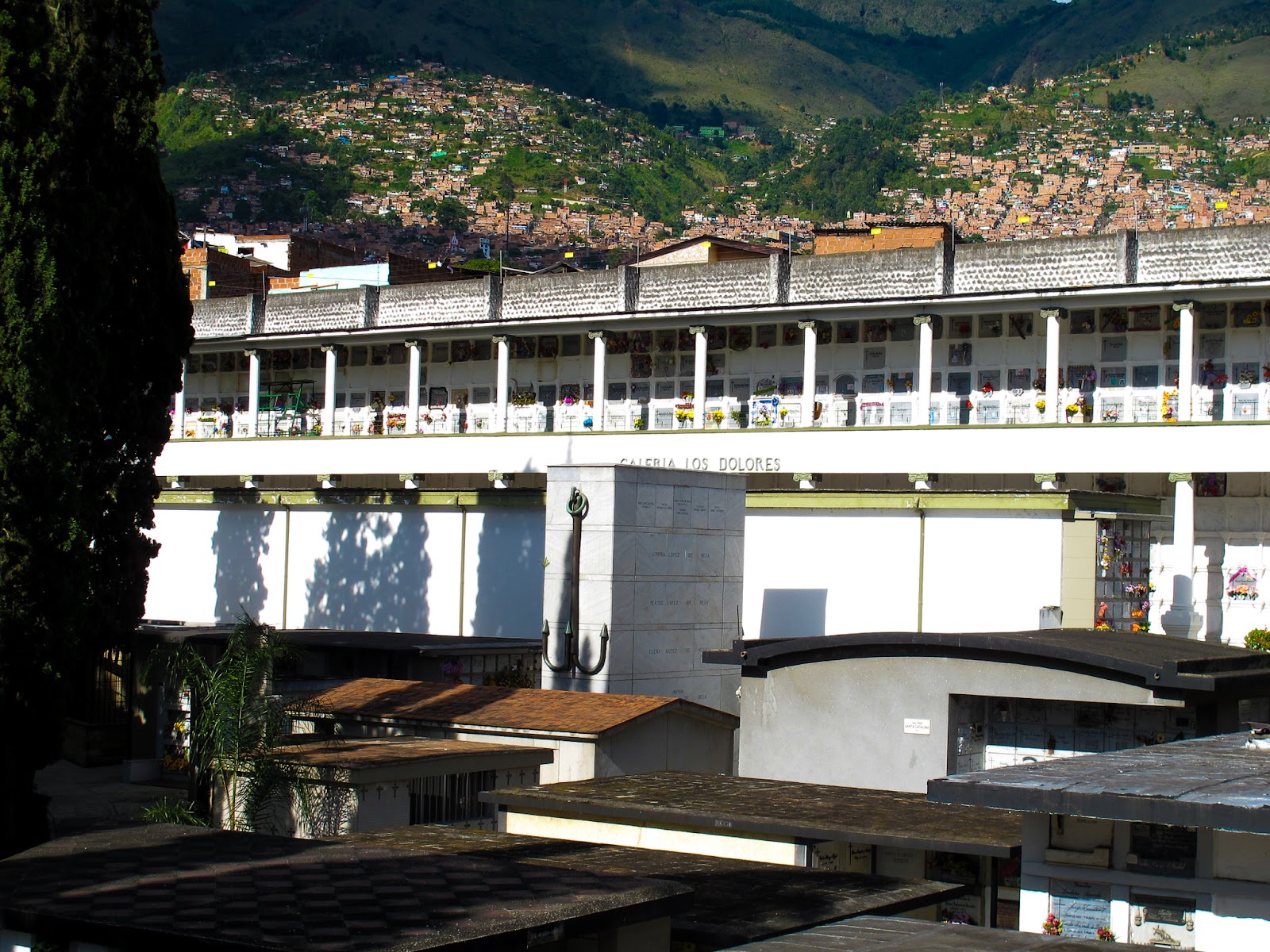 The largest cemetery museum in Colombia

While dates and facts of the cemetery’s tenants are interesting...they pale in comparison to the experience of visiting and reflecting on the cemetery itself. The connection you can derive from interaction with the space and the enrichment you can obtain is fundamental. The San Pedro Cementerio de Medellin allows you to touch, feel and experience everything, like an open museum. 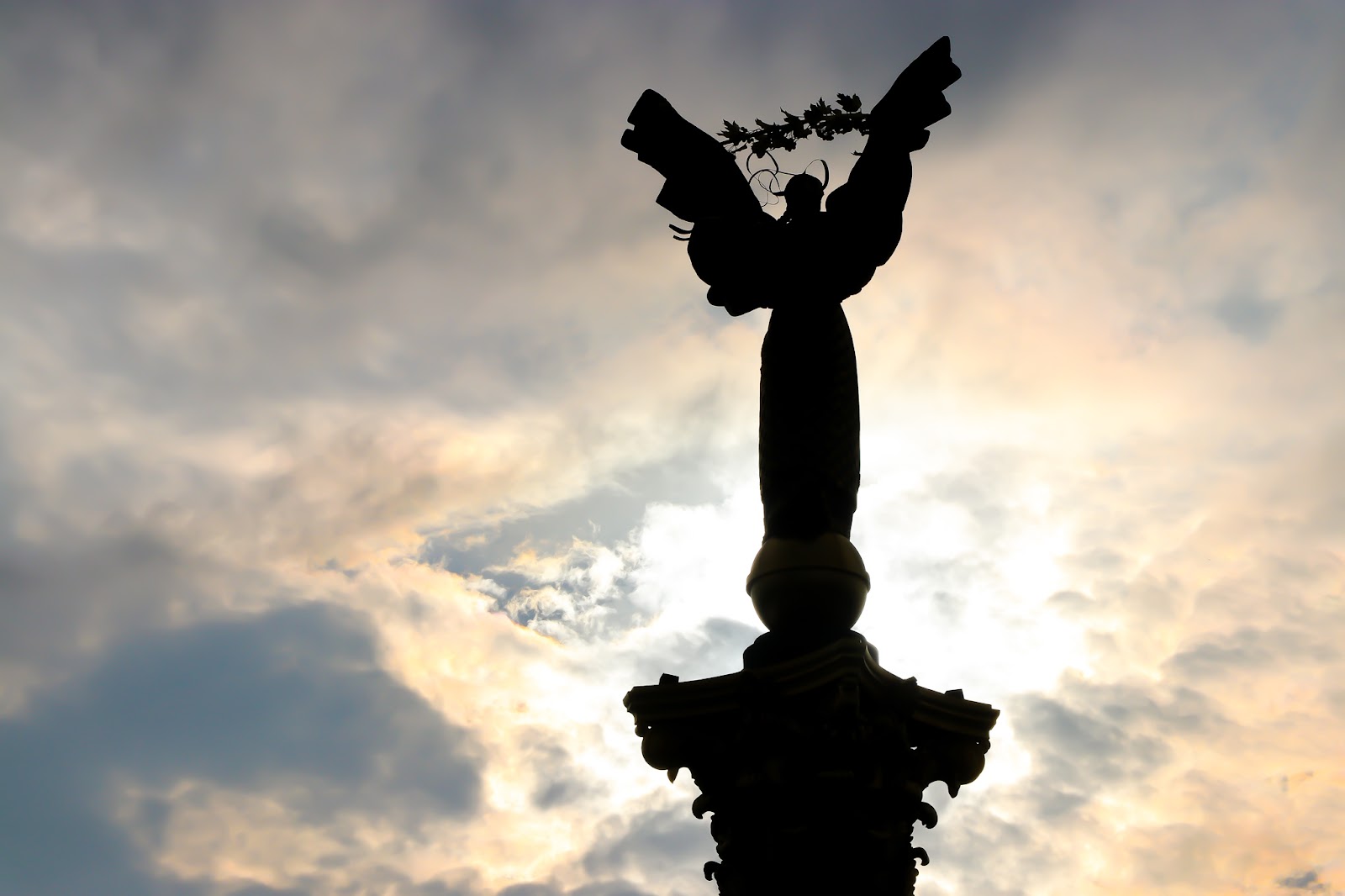 Cemeteries worldwide give insight into the history of a region


Sadly, there is a strong association with the violence of the past and this intricately designed cemetery. Many of the graves are emblematic of history and stand as reminders of the horrors of the past.

That being said, this is one of the most tranquil places in Medellín, and for good reason. All cemeteries can provide a reprieve from the rush of the bigger cities to allow a richer travel experience.

Some of the high profile names found here include Jorge Isaacs, the famed one and done novelist of one of the most read Colombian novels, Maria (1867). 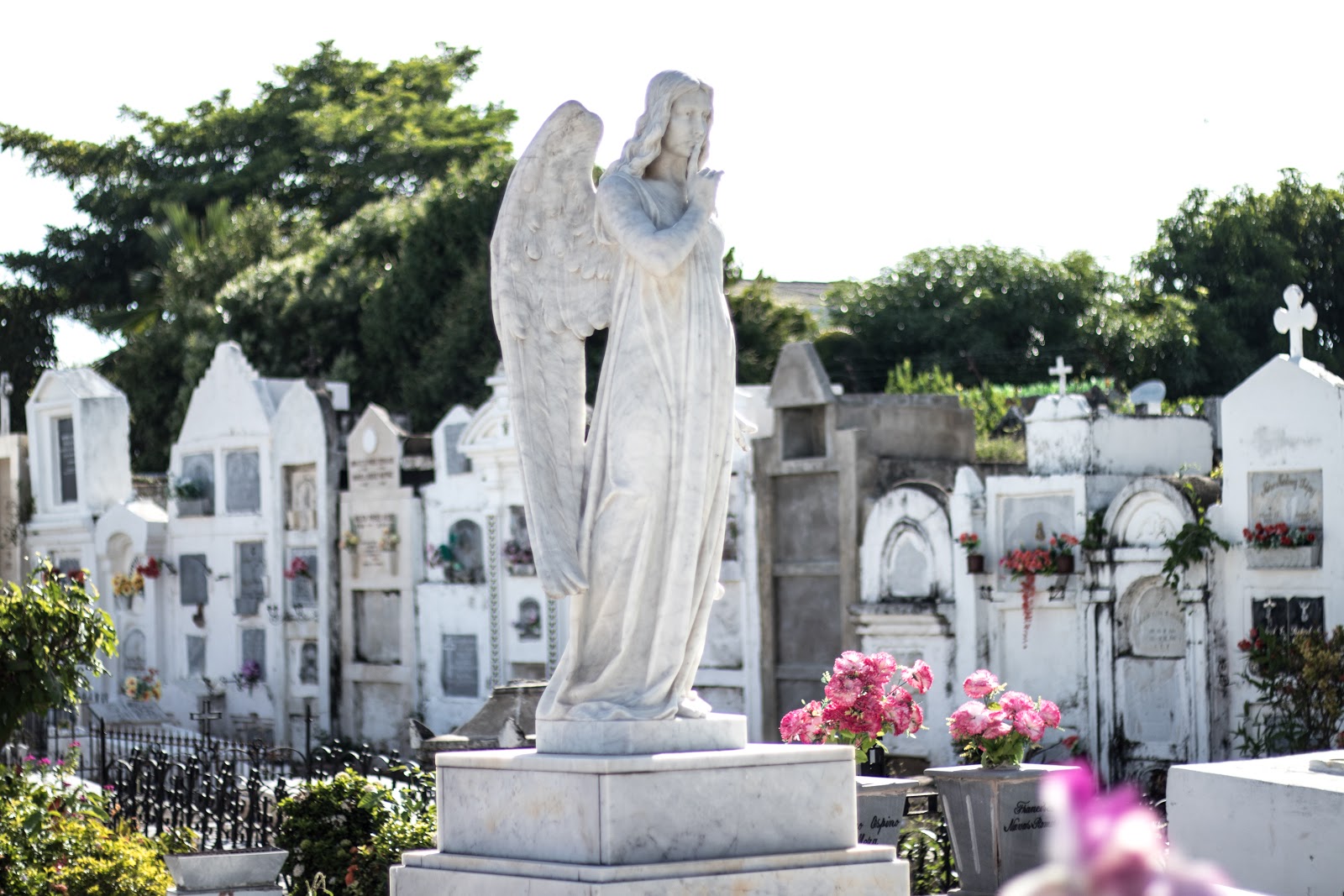 
Each month, the cemetery hosts Atardeceres en el Cementerio (Sunsets in the Cemetery), in which the grounds are open for activities and tours. This spectacular cultural event culminates in a performance of sorts to finish off the night, which contracts the typical cemetery association with mourning and faded memories.

Honorable Mentions
Colombia’s longest and most prominent river, The Magdalena, was a prime spot for disposing of bodies in the violent past. However, townsfolk along the river that would receive these bodies of unknown souls in the basin of the river and provide them a proper ceremony and ritual. This merely emphasizes the strength and solidarity of Colombian communities in times of strife and shines a bright light in times of past darkness. 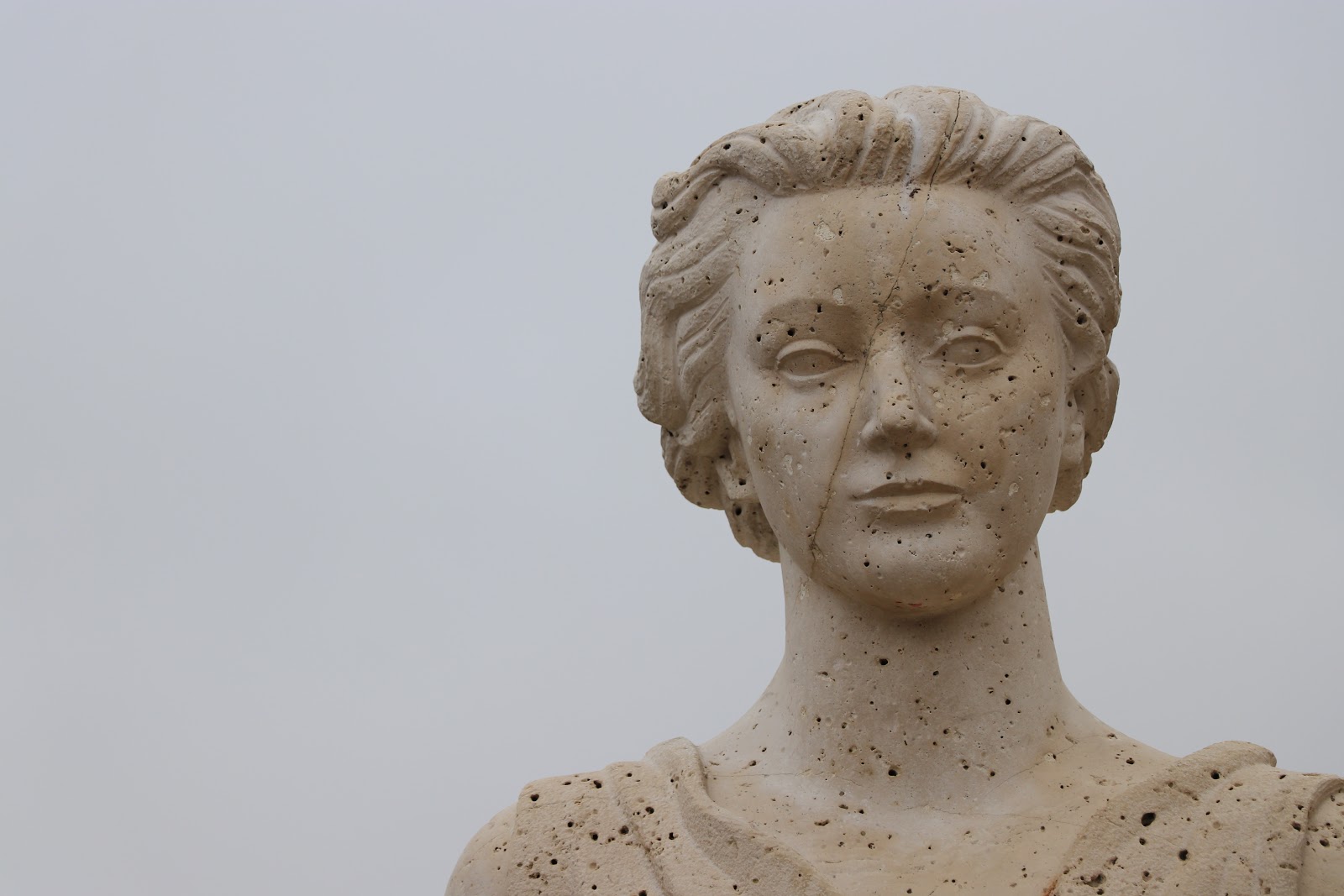 Each November, in Antioquia of the famed Eje Cafetero coffee region, you can witness the mythic ritual of a hooded man (el animero de cafetero) walking around the smaller towns with a bell to get rid of the animals. Further, in some cemeteries such as Barranquilla, among others, one can pay for a plañidera to cry at the funeral of a loved one to display a greater proportion of mourning.

If passing through Cartagena, connect with the life and legacy of Colombia's most lauded writer by visiting the tomb of Gabriel García Márquez.

Final words
Travel is a powerful tool that allows such personal growth and introspective reflection in any circumstance. Experiences in visiting cemeteries on the tourist trail can transform you, helping to realize the value of life and to henceforth live better. Being aware of the history of those before us along with present circumstances is an eye-opening and reflective journey that should not be missed.

Colombia is a tapestry of varied cultures and deep-seated traditions, which is what gives us such rich diversity, complementing our rich natural biodiversity. Indigenous commemorations, traditions, and ceremonies differ even more greatly. Visiting and comparing the cemeteries will tell you a lot about the cultural make-up of Colombia.

The cemetery cities of Colombia are true reflections of a deep history of diverse peoples and cultures in the Colombian nation. The month of November is the most important time for these locations and you’d be skirting by a phenomenal opportunity to gain an experiential connection with and insight into the culture of Colombia by not visiting these open spaces of art and history.

A big thank you to our collaborator Eloisa Lamilla Guerrero for the photos and extensive insight into her line of work. You can see some of our tours passing through the cemeteries here: