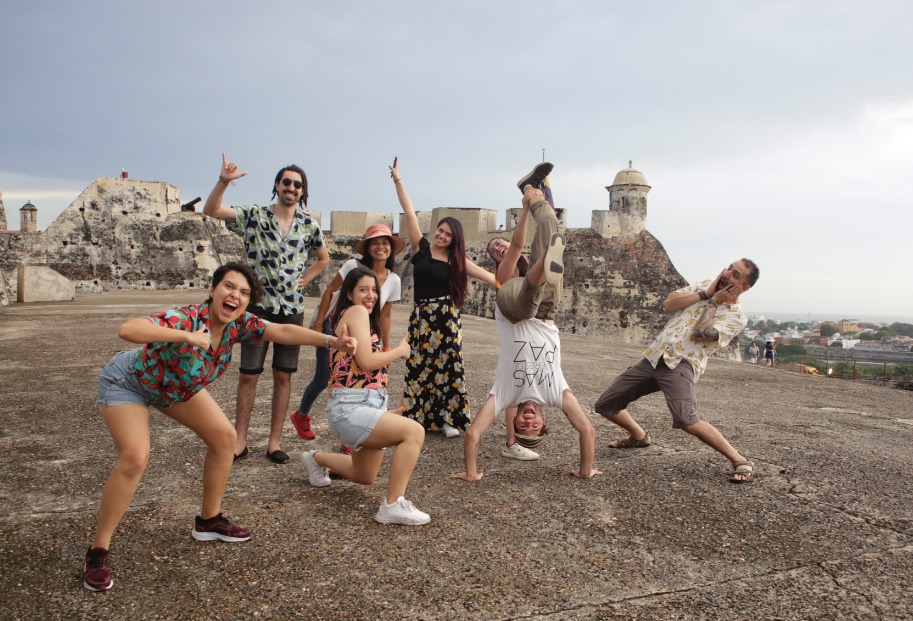 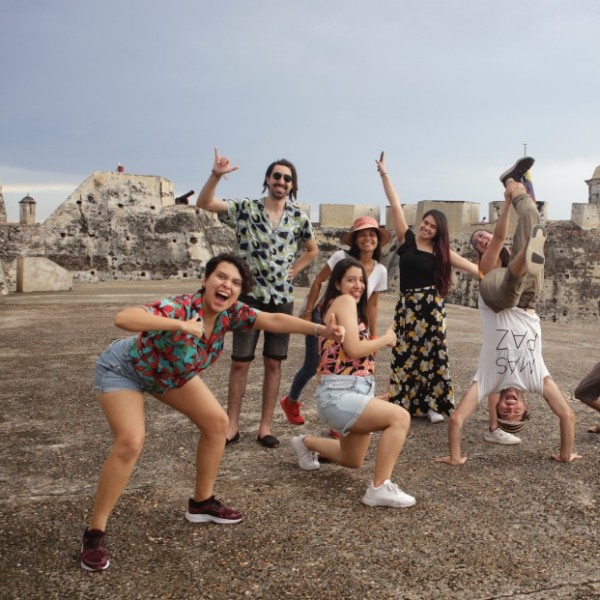 Colombia's diverse culture has also influenced the myths and legends you'll hear around the country. The second part of this series comes with more fantasy stories.

The second part of this blogpost series comes with stories of fireballs chasing humans through the desert, a hairy oversized hand pulls children under the bed, a musical duel with the devil, and more.

He's an old man dressed fully in black with a big hat of the same color. He rides on a strong black horse that blends with the night. He talks to no one, appears and disappears like by magic.

The people who have seen him say that he is accompanied by two huge black dogs lashed to thick, metallic chains. 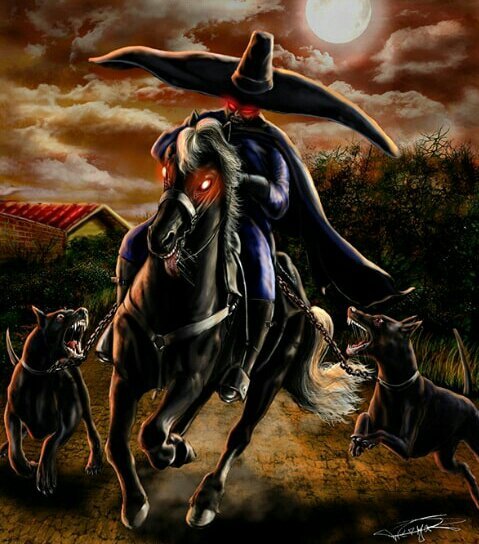 El Sombreron, all in black and accompanied by his fiery dogs (aminoapps.com)

He hunts drunks, fighters, players and cheaters. It is said that on nights with a full moon he can easily be confused with the shadows of twigs and bushes. He always arrives at full gallop at night, accompanied by a strong icy wind and disappears quickly.

Some say he died a long time ago, but people still feel his presence.

Hundreds of years ago in the eastern plains lived a very beautiful woman called Candelaria with a beautiful body and long, black and fine hair that reached up to the hips, a cinnamon skin and beautiful large blue eyes. This coveted woman married a strong man named Esteban. She then gave birth to two sons, Sigifredo and Esteban. The husband liked excessive parties, alcohol, women and was a musician with exceptional talent.

One day he wanted to go to the Sabana celebrations without intending to take his wife with him. Without thinking, Candelaria took a firewood axe and, in the presence of her two children, killed her husband and forced her two underage sons to bury him in the savannah.

When Doña Candelaria was widowed, she was the object of a bunch of good situated men who wanted to replace the deceased, but she refused all of them.

The widow Candelaria, as a mother, devoted herself to the education of her two children without anyone being allowed to defile her condition as a widow. So her life passed until Sigfredo, her eldest son, at the age of fourteen became an elegant young man with blue eyes just like her; she made him her inseparable companion and began sleeping in the same bed until she made him her lover.

Thus the time passed until Esteban, the second of her children reached the age of fourteen, was undoubtedly better looking than his older brother; young with great abilities and good manners, and all this aroused the interest of his degenerate mother to try the same as she did with his brother and to make him her lover. Esteban, who was a boy with good morals, completely rejected her.

In the course of time the widow Candelaria died and when she went up to answer to god which punished her by condemning her to wander in the savannah as a fireball, hunting the travelers and taking their orientation through the chevy. 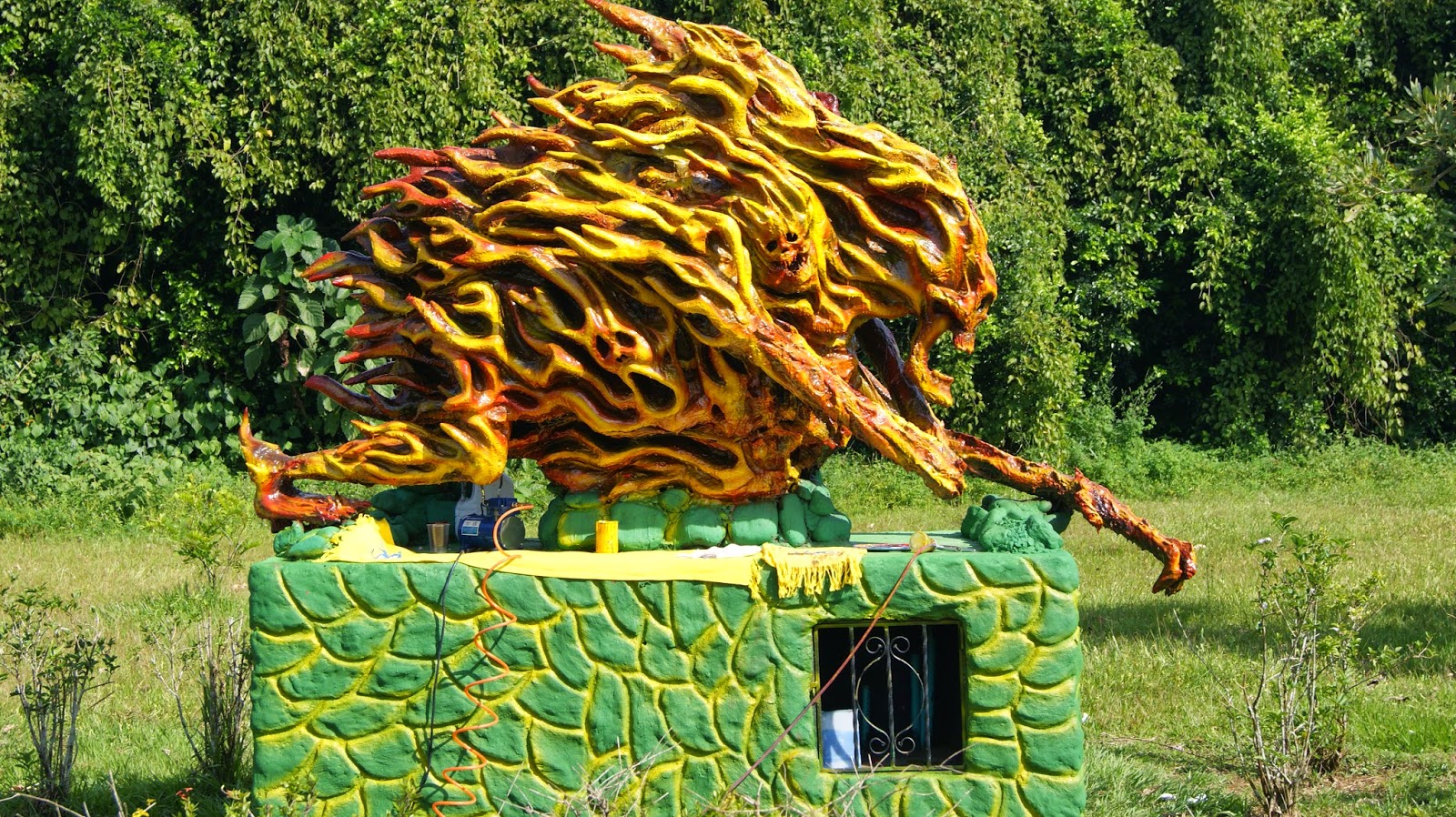 La Bola de Fuego Statue in a theme park in the area of Villavicencio (villavoalreves.co)

This hairy hand also has a black color and long, very sharp nails with a deadly poison at each end. It has twice the size of an adult's normal hand and the most unusual thing is that it is not connected to a body. You can also see the blood running out of it, see the bones and the flesh is alive through the maggots slumbering inside.

According to the legend, the children who come down from their beds get grabbed by the hairy hand and get scratched by its long nails to weaken them. Then the hand tries to pull them under the bed and bring them to the underworld where they would be the food for the other immortals or monsters of this place. 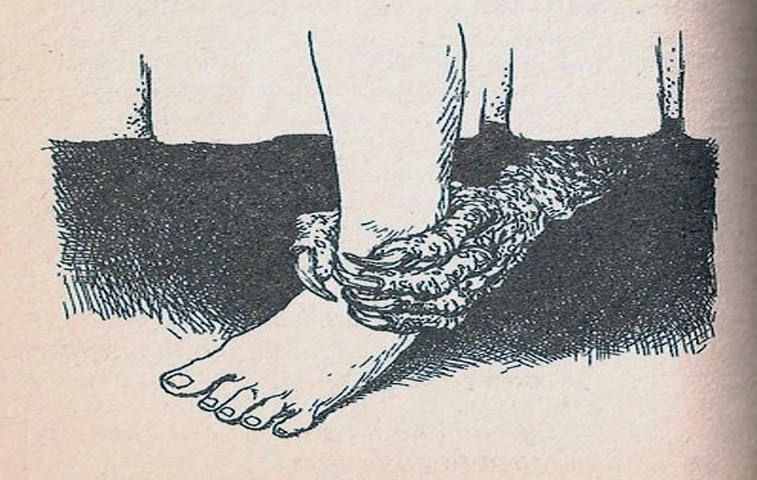 If the child manages to free himself from the fangs after being scratched by these poisonous nails, it had to be healed immediately as it could die from the injuries.

The myth of the Muelona corresponds to the story of a woman of incomparable beauty. It is said that the electrifying eyes are the main characteristic of this woman, with whom she hypnotizes men and takes them to places only she knows.

Her lethal weapon, however, is her dentures or respectively her teeth. They can destroy anything from the face of a human being to the bones of a big animal like a cow or a horse.

The Muelona is usually described as a flirtatious woman who is attracts men with her charm and grace. They then usually fall in love at first sight. La Muelona, when she knows that a man has already fallen in love with her, takes him by the hand and guide them to solitary places.

The problem comes when the men conquered by Muelona want a kiss; then she bites hard and mashes the poor beings.

Many claim to have seen or heard her. But Muelona does not attack men who belong to rich or respected families, least of all when there are small children, new pregnant women or newborns.

It is said that a minstrel named Francisco came back one night from a party lasting several days. On the way to his village, riding a donkey, he played melodies on his accordion.

Suddenly someone in the dark copied the melody and tried to overcome it; the other accordion player challenged Francisco to a duel.

Francisco played one repertoire after the other for almost two hours, exchanging beautiful melodies with the stranger. In the darkness the silhouette of the challenger sharpened, to the shock Satan himself was his opponent. 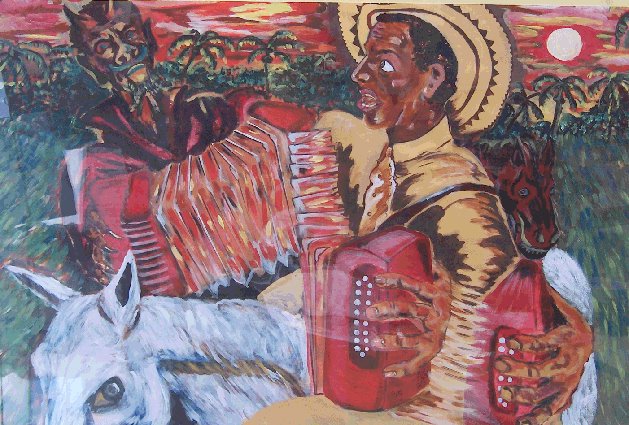 Instead of being afraid, he looked up at the sky, sat down on the roots of a tree and intoned a melody never heard before. Through the demonstration of an extraordinary skill set, everything was paused and in this silence the only thing that was alive was the melody of Francisco. Satan's eyes sparkled in the darkness and he was afraid of losing the duel to a mortal. Francisco recited the creed with such an art backwards that the whole sound was coherent in a way like never heard before and the devil understood, that he could not beat this miracle of man.

The defeated demon screamed, carried his accordion and crawled into the forest toward the mountains where he was lost forever, so that Francisco became the undisputed victor.

Colombia's myths and legends have much drama, excitement and variety to offer. However the core of myths and legends are usually approximately the same but details, decorations or other trifles can differ from the narrator, between places and countries or by the circumstances.