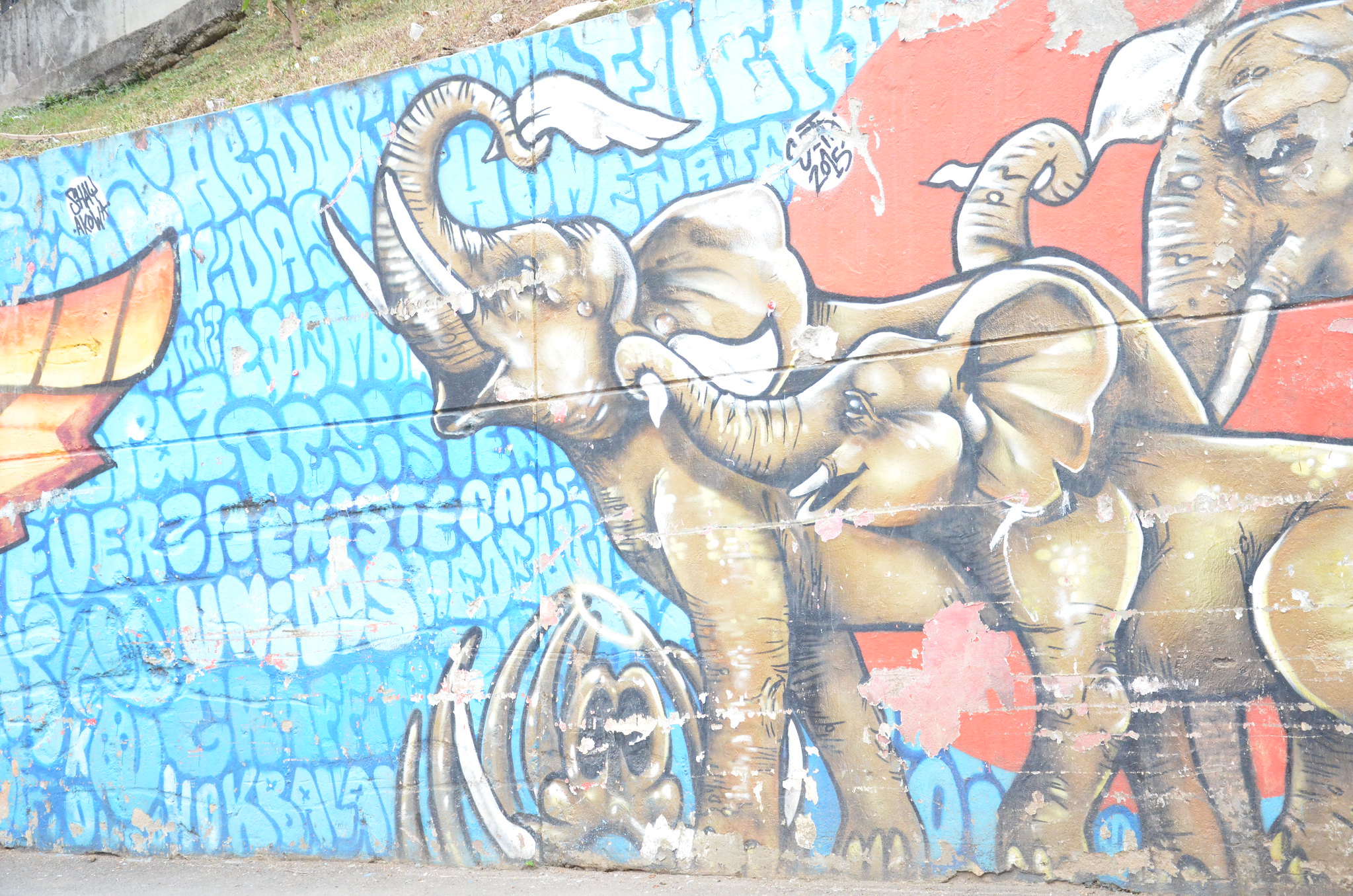 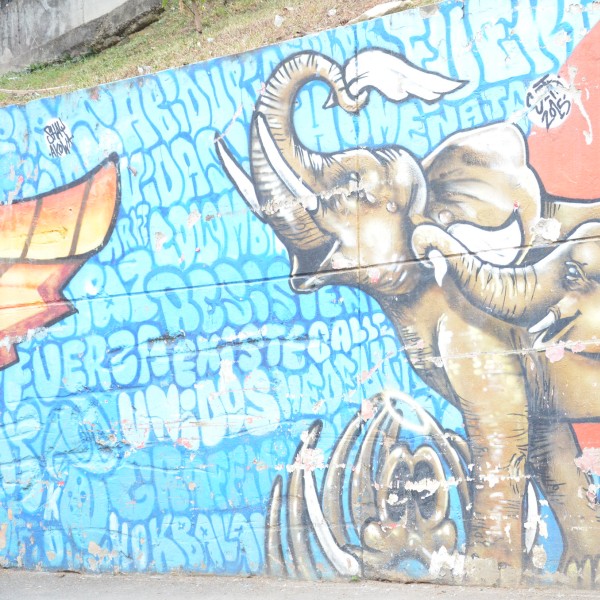 From "don't visit" to "don't miss it"- Medellin's transformation story is truly inspiring. Learn about the city's art and events in the third part of this series.

Medellin’s development is often referred to as an urban miracle. The former world's most dangerous city is in the midst of a transformation that has earned it the title of the world's innovative city of the year in 2012 (by Wall Street Journal) or 2016 the “World City Prize”. IMPULSE Travel presents a three-part series, published in a monthly cycle, which illuminates various aspects of the city’s transformation through the last years.The first part emphasized on the economic growth and the innovatic development, the second partwas about architecture and infrastructure. Now in the final part we take a closer look to a few cultural and historic aspects in the development of Medellin. 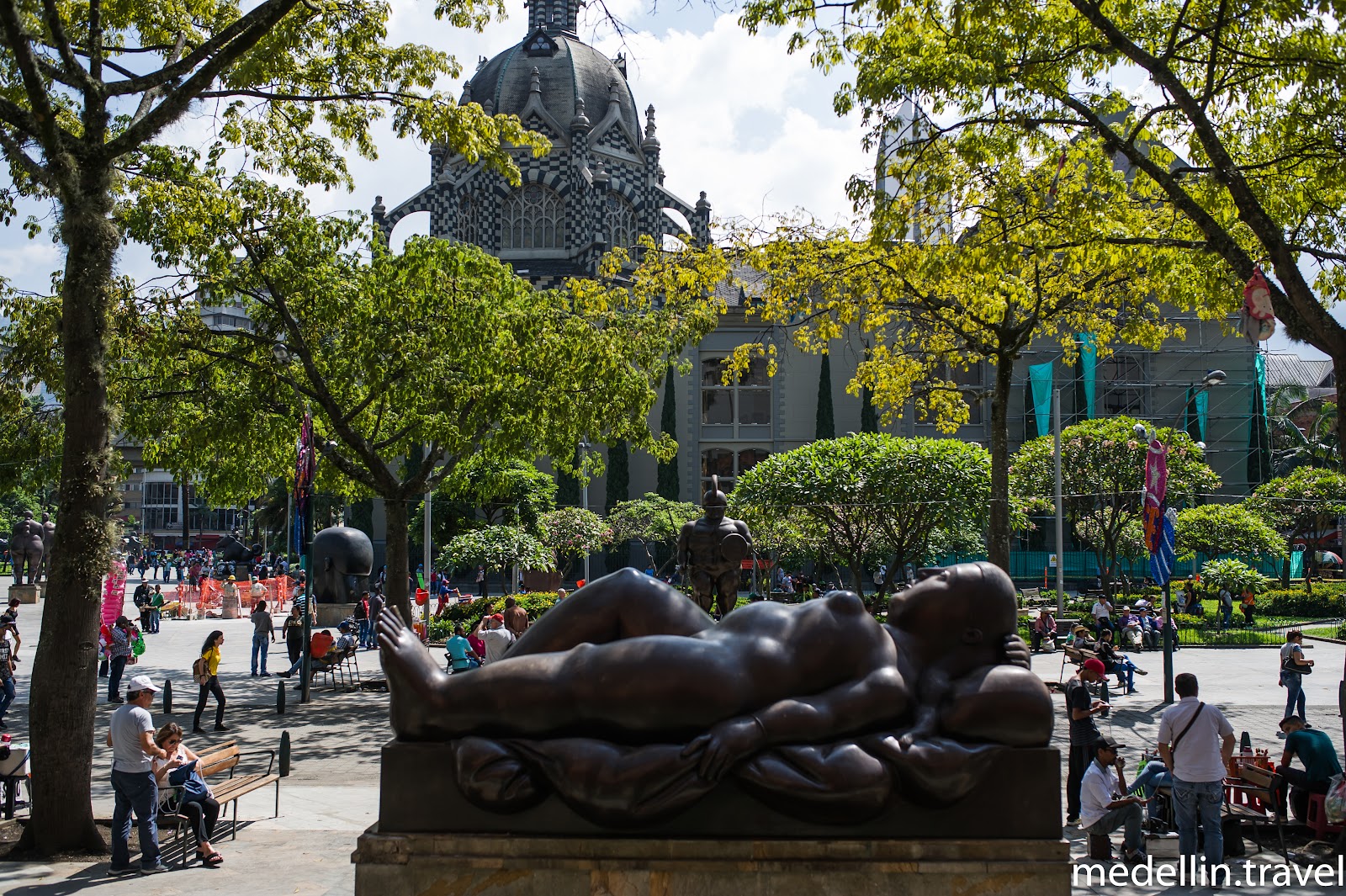 Plaza Botero in the center of Medellin

The rise of Medellin has not only brought about an economic boom and interesting architecture, but also a lot has happened in the cultural sphere since the fall of the cartels. We start with a short overview of Medellin's history.

Right after Bogota, Medellín as the second largest city, has always played a role not only economically and politically, but also socially as a competitor for the leading position in the country.

Permanently settled since 10,000 years, the Spaniards found some fierce resistance from the indigenous natives to their conquest of the surrounding valley, which began after 1540, but the local community was quickly defeated.

After the official foundation of the city in 1616, the settlement of a maximum of 700 inhabitants. In the middle of the 19th century the good business of trading coffee to overseas provided the first boom whereby the population increased from to 140,000 until 1938. Gold shops, tobacco manufacturing and mechanical engineering, the textile industry and, last but not least, imports and exports ensured greater prosperity.

Medellin increasingly became a motor and attraction for job seekers, and after 1950 the Guayabal industrial area was created. For a short time, almost 360,000 people lived there and in 1973 Medellin reached its first million inhabitants.

In this epoch also the probably most fatal urban chapter began, the high unemployment and exploding cocaine trade caused unprecedented crime rates. The Medellin-Cartel used almost unhindered the city as a base in the international drug business until the death of their boss Pablo Escobar in 1993. 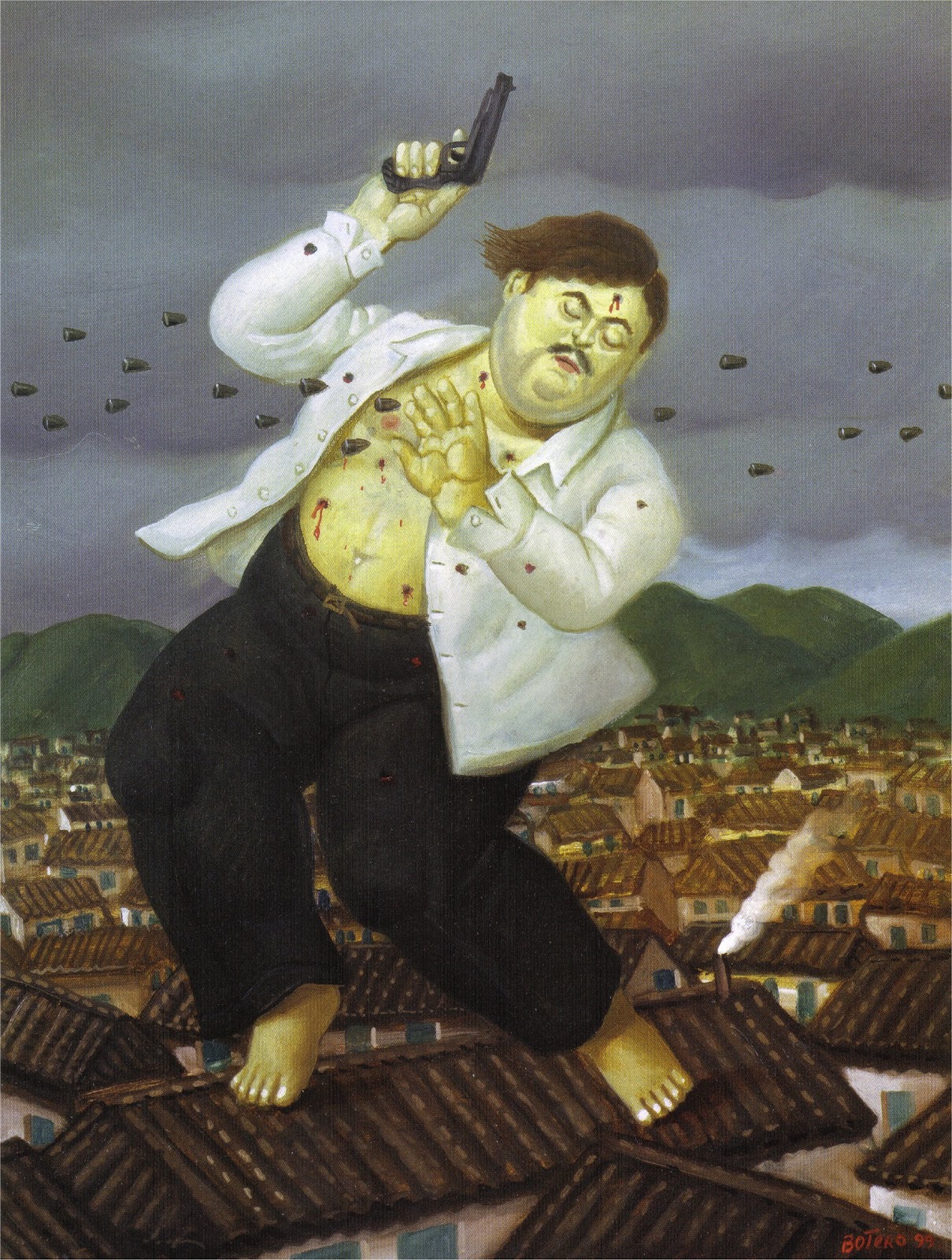 Medellin nowadays is focusing specifically on strengthening civil society through environmental protection, local transport, the construction of libraries and parks and the promotion of the university (specific information about architecture and infrastructure on part 2 of the blog post series).

These successful efforts have meanwhile been honoured internationally with praise and awards as mentioned in the introduction.

Medellin is full of impressive street art. Two types that occur very often are graffiti and murals. The difference between these two forms lies in the creation process: graffities are sprayed and murals are painted with a brush. There are samples which only serve to embellish the overall picture of the scenery, others contain (partly tragic) stories. A neighborhood known for its tragic history immortalized on the walls and facades is the Comuna 13 (check our blog post “Comuna 13 in Medellin - A history of resilience”). 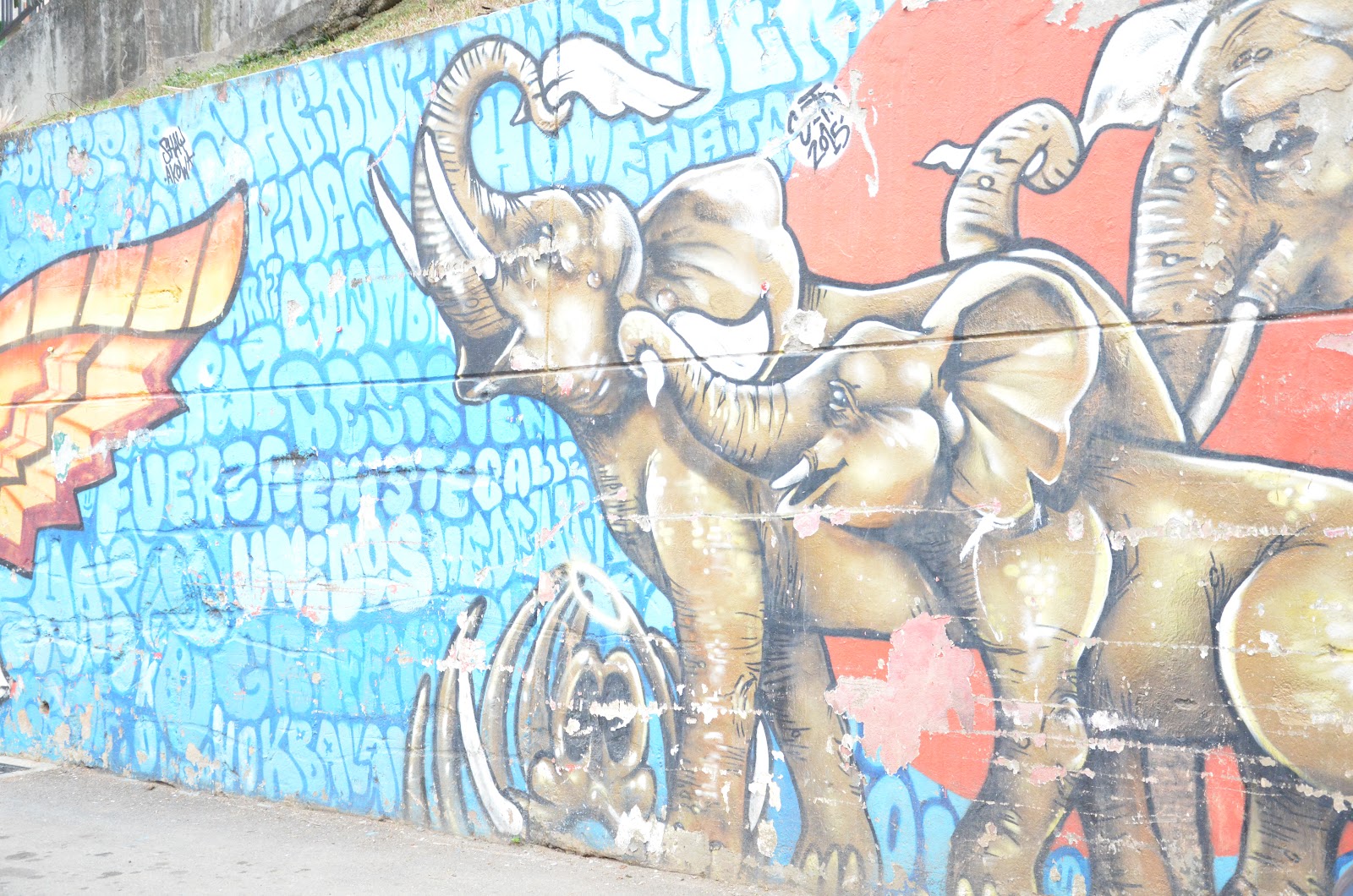 Street Art in the Comuna 13

The picture above is to interpret in the following way: Elephants, is said, are creatures that never forget. In this case they always remember the operation Orion, where the government had in mind to “clean up” the Comuna 13. Among other things, it was fired from helicopters into the district. Many, even uninvolved, lost their lives. A woman, mother of an injured children, gathered all her courage and ran out of the house with a white towel, waving it to signal the peace to the helicopters so that she could bring her injured children to a medical facility. Many more did it after her. This picture is a symbol for this courageous act, whereby the shooting would probably have lasted even longer without this woman and even more innocent people would have died in agony. More information about the Comuna 13 on our specified Comuna 13 Tour.

Another event in which art played an essential role and still today reminds us of the dark chapter of the city are the two bird statues of Botero in the Plaza de San Antonio: one shredded by the effects of a bomb, the other radiant and intact. 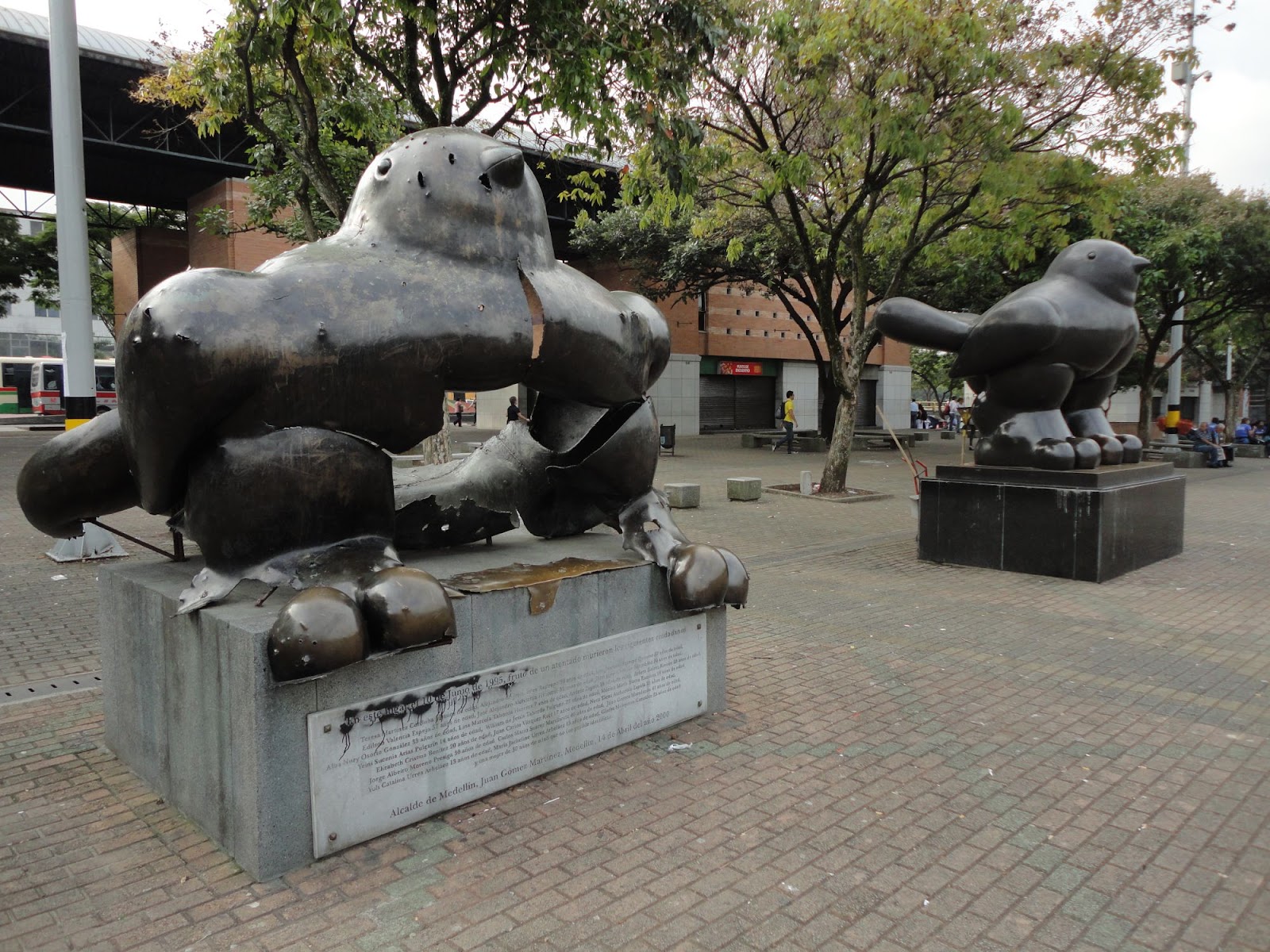 The two birds of Botero, one destroyed, the other intact (locationcolombia.com)

After an attack in the "dark times of Medellin", in which several people also lost their lives, the statue of Botero was affected. The artist, Fernando Botero, refused to restore the sculpture. Instead, he placed a second undestroyed copy next to it. And since then the two birds have been symbolic of the city of Medellin. The destroyed - el pajáro herido - for the dark days of the last decades and the shining new - el pajáro de la paz - for the hopeful new Medellin.

By the way Botero is one of the most famous sons of the city and enjoys a high reputation. He also donates a lot of his works in several projects to make art accessible to all. His unmistakable art style, which often focuses on voluptuous subjects, usually contains a message. You can find more information about the art of Botero in our specially designed Botero Walking Tour. For a little more Medellin and city history and a little less Botero a Medellin City Tour is recommended.

Since Medellin rose from the ashes like a Phoenix, the city has been a venue for art fairs again and again. These take place among other things in the Museo de Arte Moderno Medellin (MAMM) or also the Museo de Antioquia is hosts for such events, as an example: the international art meeting in the year 2015. 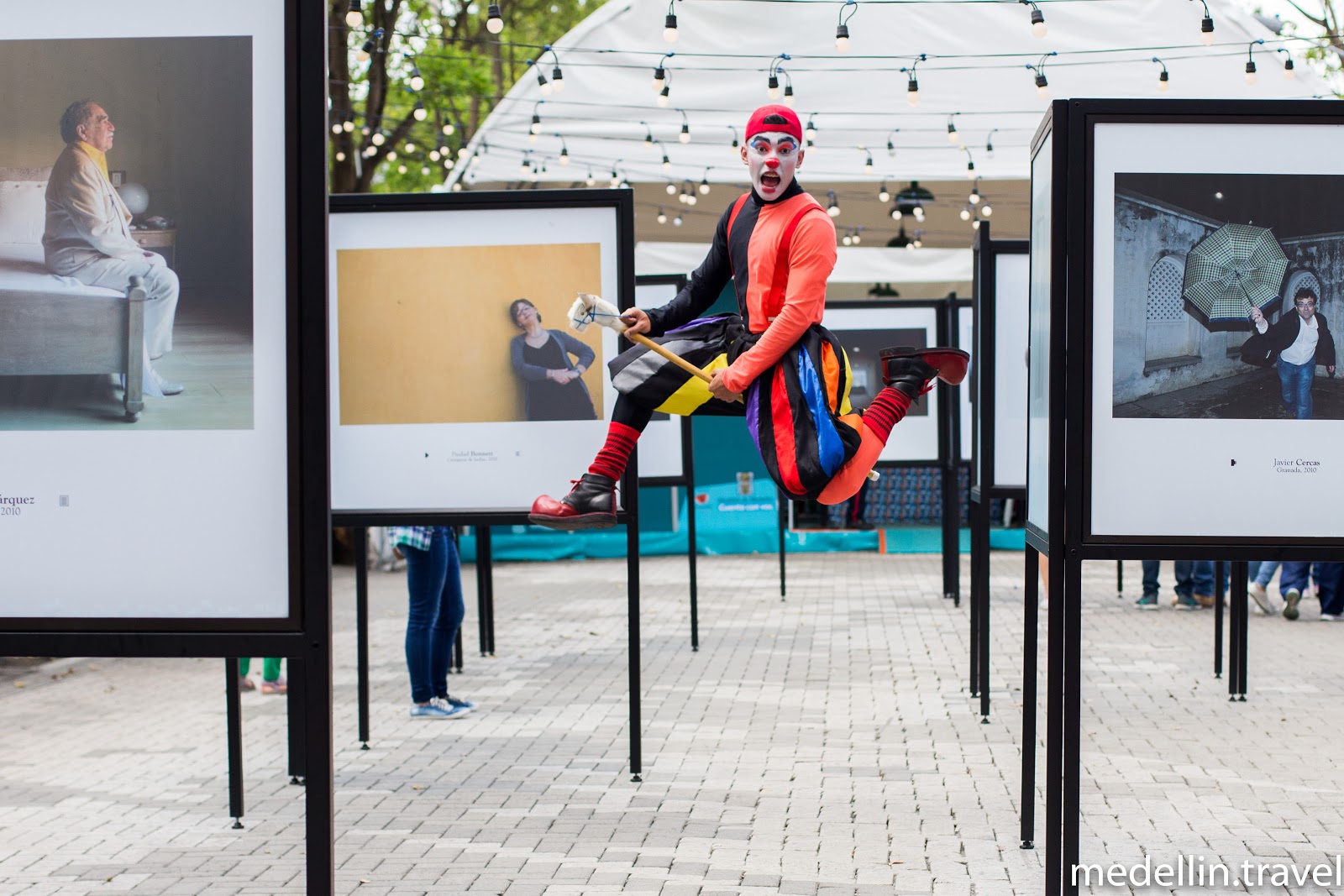 Jumping Clown in an art exhibition in Medellin

Since the rebirth of the city, the festival culture has also spread. These include both, traditional as well as new and modern events, and Medellin offers the whole range.

The Feria de las Flores, for example, is one of the best known in the traditional segment. This is one of the most important festivals of the city where the flowers are in the centre and whole parades can be admired.

The background to this is the end of slavery, whereby before the liberation it was customary for the slaves to carry their owners. Their remembrance and for the celebration of the better today only flower bouquets are carried on the back, even if these can reach sometimes a imposing weight. 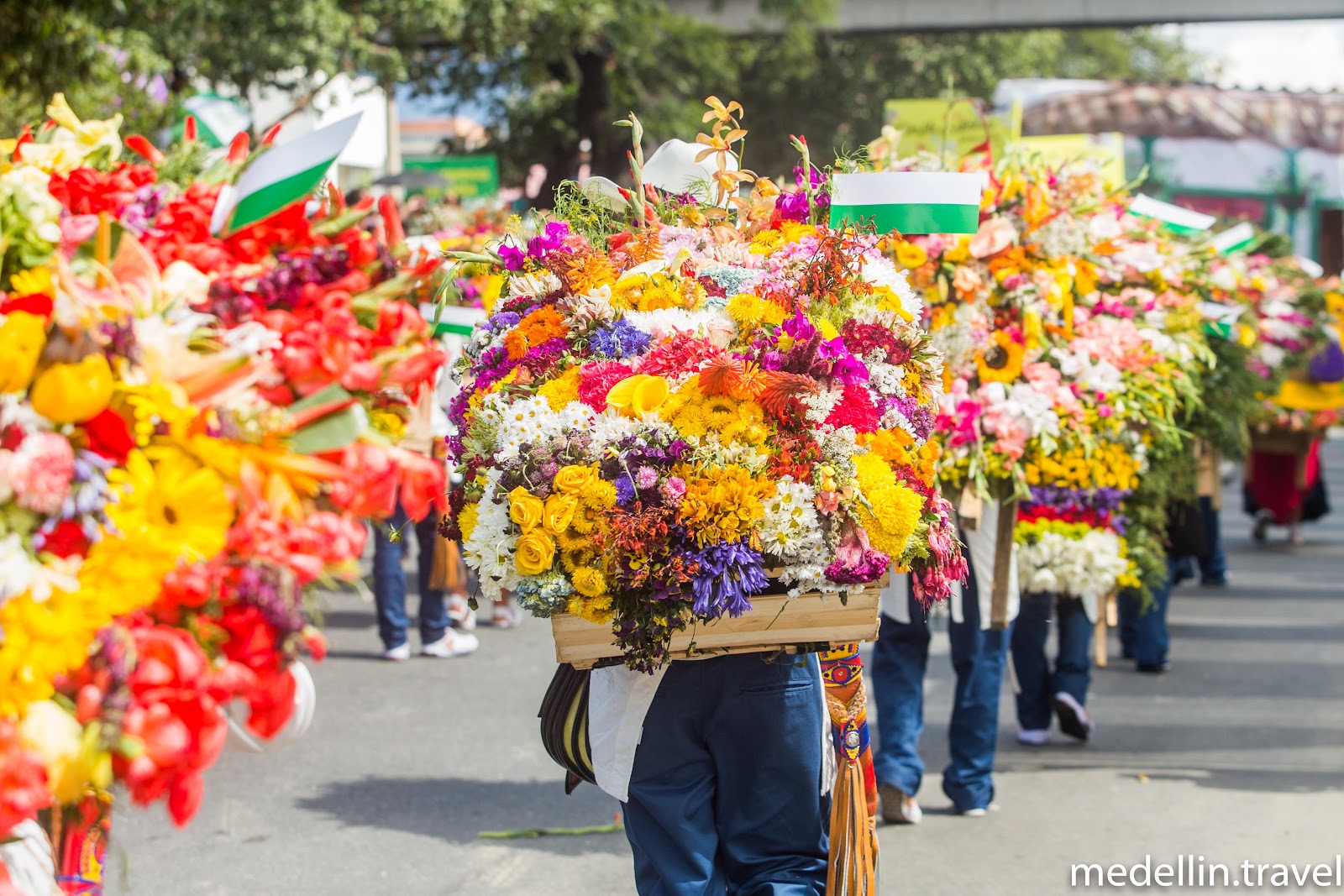 A parade during the Feria de las Flores

Other major festivals in the city include Baumpark, the International Jazz Festival, a Tango Festival and many more.

Since the "dark days" of Medellin have passed and the drug bosses no longer rule the city, a lot has happened. The city is striving to integrate all inhabitants into everyday life, achieved by an amazing infrastructure (Part 2), an economic boom through education, booming tourism and the transformation of the city into an innovative tech hub in Latin America (Part 1). However, history still shapes the everyday life, and this fact is reflected in local art. Even if not everything runs smoothly in this blooming city, it is riding on the wave of upswing, as it is increasingly hosting international festivals in the field of culture.